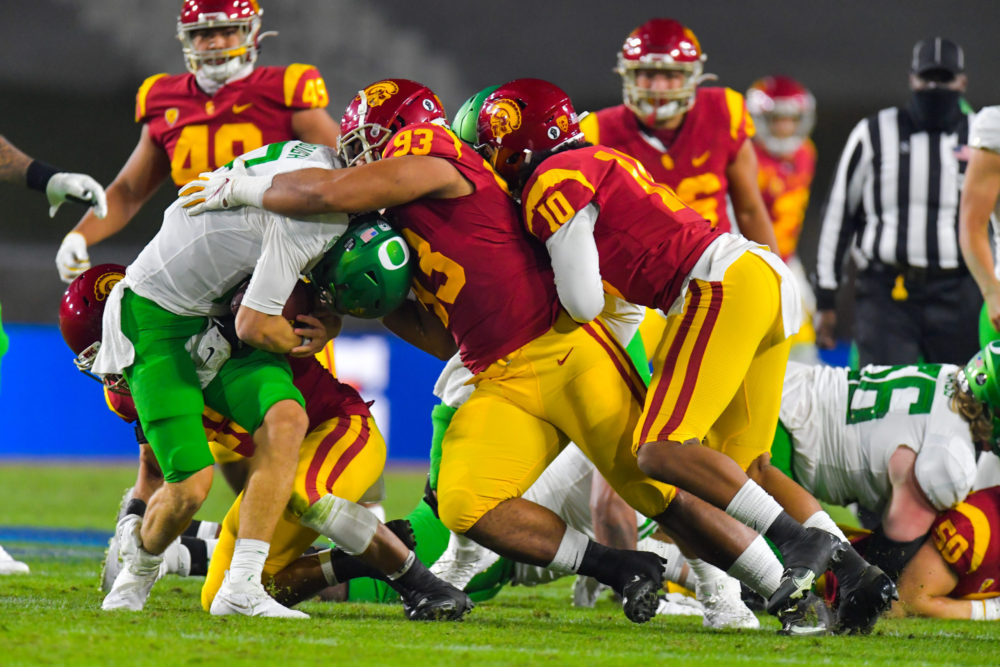 With on campus and in person recruiting suspended for the next month, coaches across the country can breathe (quickly) before diving back into it again toward the end of July. Phone calls can still take place during this dead period, so it’s not as if recruiting is turned off completely. But there was a lot of planning and work that went into setting up this June recruiting rush and USC came out the other end in a good spot with this 2022 recruiting class.

After looking at where recruiting stands on the offensive side of the ball, we’ll take a look at the defensive side, where five of USC’s nine commitments play.

There were very few, if any, bigger commitments across college football than that of five-star defensive end Mykel Williams (Columbus, Ga./Hardaway) to USC. The 6-foot-5, 265-pound defender was someone defensive line coach Vic So’oto targeted early in this class and stayed with consistently. The Trojans have also gotten plenty of recruiting help in that region from quality control analyst Dane Stevens and director of player development Gavin Morris. Stevens played high school football in Kennesaw, Georgia while Morris attended Morehouse College in Atlanta.

Williams was coveted by SEC programs closer to home, including Alabama, Florida and Georgia, as well as Ohio State outside of the region. So’oto was able to get USC into such a position that a stellar official visit sealed the deal for Williams and he announced his commitment shortly after the trip.

The commitment from Williams was and is massive for USC recruiting. He is a well-known name in this 2022 class and his announcement made plenty of other 2022 (as well as 2023 and 2024) recruits take notice. And it starts to stack players in recruiting classes who can play with or off each other. It’s unlikely that Drake Jackson will still be on the USC roster for the 2022 season, but getting Korey Foreman and Williams as defensive ends in back-to-back classes is more the kind of recruiting to which USC is accustomed.

Now, it’s about loading more talent up along the defensive line, and So’oto and staff have their hooks in several more top talents.

One of the more likely additions is four-star defensive lineman Christen Miller (Ellenwood, Ga./Cedar Grove), who took an official visit to USC the same weekend as Williams. The 6-foot-4, 285-pound lineman is scheme versatile and can play inside or outside, which makes him a nice fit for this Todd Orlando defense. There was a ton of momentum created by USC on that visit and he and Williams are good friends, so the recruitment between defensive linemen will continue. But as always with out of state recruits, the more time they spend back home after a visit, the more difficult it becomes to make that commitment across the country. USC is definitely a top option and the Trojans will continue to push, but Georgia and Ohio State are both after Miller and those are a couple of strong options as well.

Another target up front the Trojans are doing well with following an official visit is edge defender D.J. Wesolak (Boonville, Mo./Boonville). There are a ton of schools still involved in his recruitment from all across the country since Wesolak is set on heading out of state for school. Alabama, Clemson, Florida, Georgia, Oklahoma, Texas, Texas A&M and plenty of others are chasing the 6-foot-4, 240-pounder who can play outside linebacker or defensive end, or could be a perfect fit in that hybrid defensive end/linebacker spot occupied by Drake Jackson right now. This is another recruit who hit it off very quickly with So’oto when the Trojans came in with an offer this past spring and a solid official visit has them squarely in the mix.

USC also hosted four-star defensive tackle Chris McClellan (Owasso, Okla./Owasso) on an official visit, but the nation’s No. 160 overall prospect also took trips to Florida and Ohio State, and the Buckeyes could be tough to beat right now. The Trojans could also be fighting an uphill battle for four-star edge defender Anto Saka (Towson, Md./Loyola Blakefield), who took an official visit on June 11, but also tripped to Northwestern and Penn State and the Big Ten might be his ultimate landing spot, closer to home.

The Trojans are still somewhat in the mix for five-star defensive end Omari Abor (Duncanville, Tex./Duncanville). The nation’s No. 23 overall prospect visited Alabama, LSU and Ohio State in June and Oklahoma and USC are scheduled to get official visits from him later in the calendar. Oklahoma is the presumed leader, but USC has done well to stay in the race.

There are a few interior defensive line prospects still in the mix. Three-star Maxie Baudoin IV (Youngsville, La./Ascension Episcopal) released his top five schools in mid-June and USC made the cut. The 6-foot-3, 290-pound two-way lineman had a hot spring on the recruiting trail and is now looking at Auburn, Georgia, Florida, Texas A&M and USC. His only official visit in June was to Auburn, which at this point is probably considered the favorite.

USC will also recruit Hero Kanu (Rancho Santa Margarita, Calif./Santa Margarita), who was one of the huge spring risers anywhere in the country and now sits as the No. 82 overall prospect. He now holds offers from Alabama, Clemson, Florida, Ohio State, Oklahoma, Texas and plenty of others. He took trips to Florida State, LSU and Texas A&M this June and it’ll be interesting to see how hard USC goes after him and how often he is on campus this fall. Another prospect to monitor could be four-star defensive tackle Anthony Lucas (Scottsdale, Ariz./Chaparral), who took five June official visits to Alabama, Miami, Notre Dame, Oregon and Texas A&M. USC was on his top-10 list he released in April and said the Trojans were one of the programs recruiting him the hardest.

That edge defender position was covered in the defensive line recruiting, but it could also be lumped in here. Looking at the other two linebacker spots, June didn’t offer much movement. USC grabbed a commitment from three-star inside linebacker Ty Kana (Katy, Tex./Katy) back in February and he took an official visit to USC in early June to firm up that commitment. USC hosted no other inside linebackers on official visits and also saw former commit, four-star linebacker Niuafe Tuihalamaka (Mission Hills, Calif./Alemany) commit to Notre Dame.

The top two names to watch are four-star outside linebacker David Bailey (Santa Ana, Calif./Mater Dei) and three-star athlete Carson Tabaracci (Park City, Utah/Park City). Bailey took multiple unofficial visits to USC in June and the Trojans are doing well there. He took official visits to Cal and Stanford, with the Cardinal posing a legitimate threat. The 6-foot-3, 220-pound linebacker is going to do every bit of his homework throughout the recruiting process to find his best fit.

Tabaracci is a phenomenal athlete who could probably play a few different positions in college. His June consisted of an offer from Stanford and also one from Ohio State, after he put on a show at the Buckeyes’ camp. UCLA and Utah are also in the mix here, but his recruitment could go more national after the Ohio State offer.

USC didn’t make a recent top-five list for four-star Cyrus Moss (Las Vegas/Bishop Gorman) who is looking hard at Oregon. And the Trojans had a visit scheduled from five-star Harold Perkins (Cypress, Tex./Cy Park), but he delayed it in favor of going to Texas. His first visit was to Texas A&M and the Aggies look to be in a good spot for another elite Texas prospect.

The cornerback position is almost locked up at this point and the Trojans are putting together a phenomenal group there. It started this past January with a commitment from four-star Fabian Ross (Las Vegas/Bishop Gorman) and then got serious with the addition of five-star Domani Jackson (Santa Ana, Calif./Mater Dei) later that month. USC hosted four official visitors at the position and it’s safe to say that position coach Donte Williams was successful. He earned a commitment from four-star Jaeden Gould (Oradell, NJ/Bergen Catholic) and has the Trojans in a very good spot for four-star athlete Gentry Williams (Tulsa, Okla./Booker T. Washington). Oklahoma is going to continue pushing for Williams and that could turn into a real battle. Williams visited Arkansas, Florida and USC on official visits in June.

USC also hosted five-star cornerback Will Johnson (Grosse Pointe, Mich./Grosse Pointe South). Johnson has long been a USC target and has looked hard at the Trojans, but there are family ties to Michigan and he committed to the Wolverines in late-February. He and Domani Jackson are close, so the two will likely continue recruiting each other until signing day. And the Trojans are in the mix with four-star cornerback Earl Little Jr. (Ft. Lauderdale, Fla./American Heritage). His only June official visit was to USC, but he has plenty of fall visits scheduled closer to home. Alabama is the favorite at this point, but Florida, Florida State and LSU are all involved as well.

If the Trojans want to take a fourth corner and the out-of-state options stay closer to home, local four-star corner Ephesians Prysock (Mission Hills, Calif./Alemany) could become an option. He took a June official visit to Ohio State.

At safety, the Trojans are all in on four-star Zion Branch (Las Vegas/Bishop Gorman), who took an official visit to USC this past weekend. But Branch also took a June official visit to Ohio State and the Buckeyes left a big impression. This is going to be a recruiting race worth watching. USC brought in two safeties out of the transfer portal and signed three high school prospects in the 2021 class, but a talent like Branch is a guy the Trojans need to add if they are going to continue bringing in the best prospects in the region on both sides of the ball.