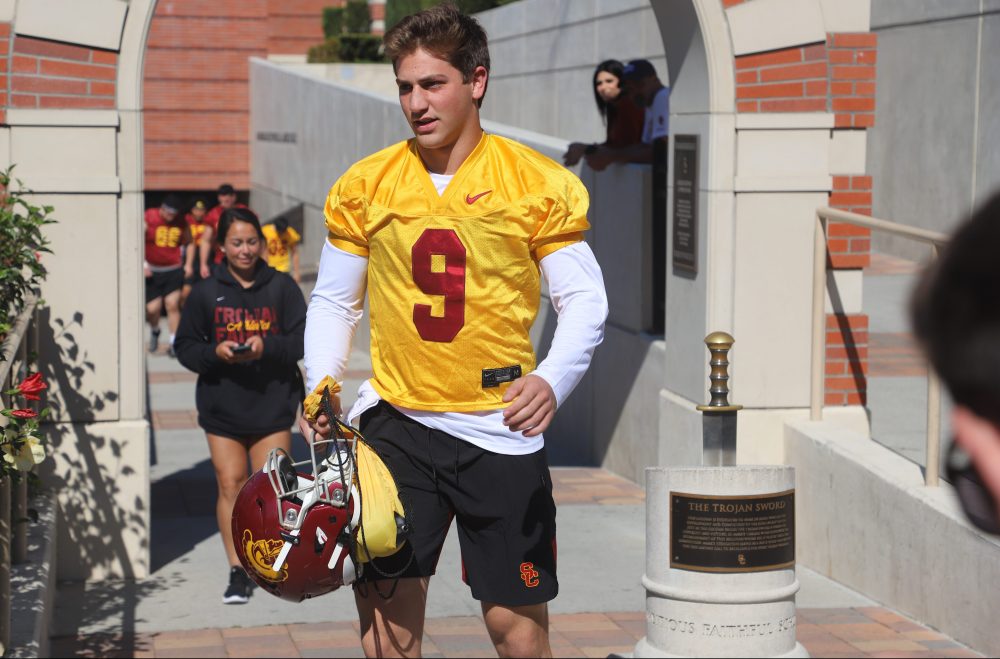 The Pac-12 CEO Group will meet today and will deliver an answer to the will-they-won’t-they question regarding conference teams playing a fall football season. There have been a few twists and turns to get to this point, but ultimately the conference still has an opportunity to play a fall season in concert with its peers, and an opportunity to set itself up to participate in the College Football Playoff.

The Pac-12 cited concerns related to community spread, a lack of available testing and unknown issues related to myocarditis.

On Sept. 3, the conference announced an agreement with Quidel, a company that would provide all conference campuses with Sophia 2 testing machines that could deliver daily, 15-minute antigen tests. This seemed to clear every hurdle the conference’s medical advisory board had erected related to both testing issues and community spread. But the California and Oregon schools remained unable to practice due to state and local health and safety guidelines.

USC and the other three California schools have been unable to gather in groups of more than 12, making conducting a football practice out of the question. California Governor Gavin Newsom said recently: “Nothing in the state guidelines denies the ability for the Pac-12 to resume. Quite the contrary. That’s been a misrepresentation of the facts.”

Factually, a program could put a team on the field as a group of 11 players, remaining within the cohort guidelines. And according to Jon Wilner, there was a real belief from a state health department official that the 12-person cohort limit was workable in terms of playing college football games.

It’s not. And conference programs have impressed that upon the decision makers. But as of Thursday morning, there have been no public statements adjusting that 12-person cohort limit. (Note: Wilner reported that as of 11 am Thursday, California health officials have indeed committed to expanding the cohort number to align with football needs.)

As for the meeting between the Pac-12 presidents and chancellors today, they will vote on whether to play a fall football season and if so, determine the details related to that, including a start date for practices, fall camp and games.

The preference for several conference programs is an Oct. 31 start, while some favor a Nov. 7 start. The difference is in a belief that programs would need a full six weeks to ramp up to a season, or if they could do it in less time. Conference coaches have long said they would need six weeks–two weeks of conditioning and four of fall camp–before playing a game. But some have amended that by saying they could work with five weeks.

There is also the possibility that some teams begin on Oct. 31 and others on Nov. 7, though commissioner Larry Scott has stated that the conference would always prefer to move together on issues like this. But that might be the way things wind up going, as momentum is there for an Oct. 31 start for some programs, with a few programs unable or unwilling to commit to that. A decision might need to be made that allows a split season, with some conference teams playing one more game than others.

A season beginning on Oct. 31 would put the Pac-12 one week behind the Big Ten, which will begin its restarted fall season on Oct. 24. Big Ten teams will play eight conference games and a final game, with the champions of the two divisions in the title game, the second-place finishers squaring off, third-place finishers matching up, and so on down the standings. The Big Ten’s return to the field was likely the biggest impetus to the Pac-12 even seriously discussing a fall football season. The two conference will be weeks behind the other Power-5 conferences, as the SEC will kick off its season this weekend, joining the Big XII and ACC in playing games. Though, there have been postponements and cancellations across virtually all conferences to this point. Houston, for example, has had its season-opener postponed or canceled five different times. Now, a season that was supposed to kick off Sept. 3 won’t have a chance to begin until Oct. 8 at the earliest.

An Oct. 31 start would allow Pac-12 programs to play seven conference games in the regular season, plus potentially that extra game in line with the Big Ten structure. If the Pac-12 believes that eight total games is enough to warrant inclusion into the College Football Playoff, finishing the season with a conference championship game on Dec. 19 is imperative, as the following day is the final meeting date for the CFP committee, when they will select the four playoff participants.

The issue with a six or seven-game regular season for the Pac-12 is the unavoidable schedule imbalance. Though, that should be the least of the conference’s worries at this point. And with full control of the schedule, the conference can still try to somewhat protect its top teams while choosing matchups, travel dates and interdivisional opponents–though doing so would be a departure from historical practices.

With testing protocols in place–USC’s Quidel machine arrived on campus Wednesday–the hope for a USC program looking to return to the field might be a simultaneous announcement that the Pac-12 is officially restarting its 2020 fall season and that state and local guidelines related to cohort numbers for university athletics have been altered to allow for full football practices.

All eyes and ears will be on that meeting today, as it is the second meeting in a week for the Pac-12 CEO Group. Initially, they met last Friday to seemingly decide on a potential fall season, but reports came just before the meeting that no official decision was expected to come from that. That hit home when the meeting ended with a statement saying they would postpone any decision until Thursday’s meeting. Now, there is no more time to drag this out, as starting a season later than Nov. 7 is probably not a viable option at this point.