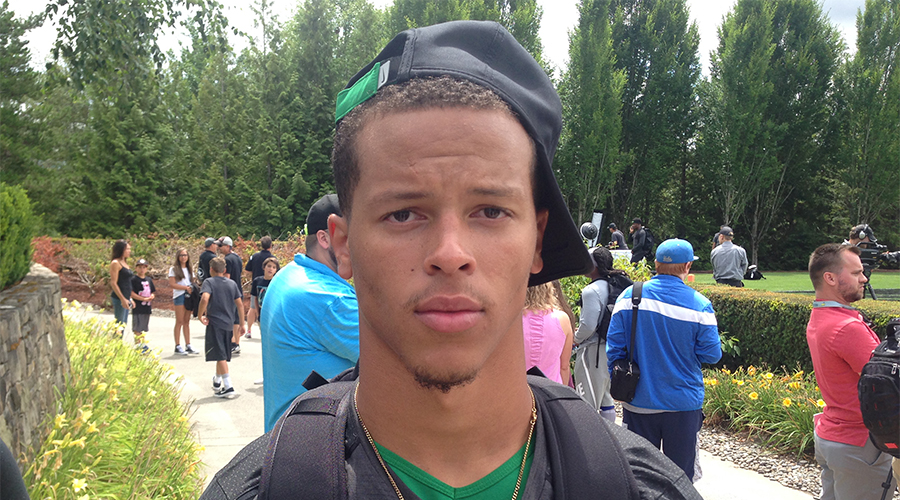 Notes, quotes and observations from Day 2 at The Opening on Saturday.

* Running backs Stephen Carr (USC commit) and Najee Harris (Alabama commit) both showed off their receiving skills on Saturday, making some nice catches – both when coming out of the backfield, or split out wide. Carr, in particular, was targeted often by the Fly Rush quarterbacks.

* Also on Fly Rush, perhaps no one made more noise with his play early on in the day than Los Angeles (Calif.) Hawkins wide receiver Joseph Lewis. The Class of 2017 USC target was nearly impossible to stop in one game I saw, making four receptions on one drive alone. His Hawkins teammate, Class of 2018 receiver Jalen Hall, also had a solid day playing for Alpha Pro.

* There are a trio of defensive tackles on the Trojans’ radar who are participating in The Opening in Greg Rogers, Jay Tufele and Marvin Wilson, and all three produced at a high level on Saturday. Of the group, Wilson was arguably the most dominant, drawing plenty of praise from The Opening coaches for his technique in the early drills, and then winning more than his fair share of battles in the one-on-ones. Tufele, who shined at The Opening Regional in Oakland, also really impressed. For how big he is, he’s incredibly fluid in his movement. Rogers was probably a little more inconsistent than the other two targets, but he had a couple of reps during the one-on-ones where he exploded off the line and blew right by the offensive linemen. It’s safe to say that the Trojans would be fortunate to land any of these highly touted recruits.

* West Linn, Oregon cornerback Elijah Molden recently released a top 4 that included USC as well as Oregon, Stanford and Washington, and he’s really turned some heads with his play in coverage so far. He came up with a terrific interception that he turned into a pick-six on Saturday.

* Not surprisingly, Calabasas cornerback Darnay Holmes had a great day on both sides of the ball. Often times lining up as the nickelback on defense for Mach Speed, he had at least one interception that I saw.

* I’ve also been impressed with Sacramento (Calif.) Inderkum tight end Josh Falo. A big, athletic target with long arms, he reeled in a couple of passes over the middle of the field that caught my eye.

Class of 2017 quarterback Tua Tagovailoa (Honolulu, Hawaii/St. Louis) gave a verbal commitment to Alabama this past May, but the USC coaches are still coming after the Honolulu (Hawaii) St. Louis signal-caller hard, and the Trojans aren’t completely out of the equation just yet.

In fact, in addition to the Crimson Tide, Tagovailoa said that the only other program that is definitely in line for an official visit at this time is USC.

“I do plan to check them out,” Tagovailoa said. “They still keep in contact with me and everything like that. I talk to three different coaches – Coach Tyson Helton, Coach Clay Helton and Coach Johnny Nansen. They’re in touch about every two weeks or so.

“That’s been my dream school. I grew up watching them. They’re on the West Coast, and we’re in the Pacific, so we see almost all of their games on T.V. And they have great tradition there.”

That being said, Tagovailoa said that he is very comfortable with his decision to commit to Alabama, and it certainly appears as though a lot would have to happen for him to flip anywhere else.

“That’s the place that I committed to, and when you give a coach your word, they usually expect you to follow through,” Tagovailoa said. “And that’s something that’s big in our Polynesian culture back home.”

Citing a lack of communication between himself and USC defensive backs coach Ronnie Bradford and the rest of the Trojans coaching staff back in May, USC safety commit Bubba Bolden (Las Vegas, Nev./Bishop Gorman) opened his recruitment up a bit.

Fast-forward to today, and Bolden says that the Trojans staff has made him more of a priority, with USC’s head coach himself, Clay Helton, taking on a major role in his recruitment.

“They picked it up big-time,” Bolden said. “Coach Helton told me, ‘You’re my guy. I’m going to recruit you hard.’ And I also still have Coach Bradford and the other coaches hitting me up too, so it’s good. Coach Helton texted yesterday, actually. I talk to them like once a week.”

At the same time, Bolden is still maintaining contact with plenty of other schools as well, and he recently lined up official visits for the fall with Arizona State, Colorado and UCLA.

“I don’t like the word ‘soft commit,’ but I’m still open to every other school,” Bolden said. “I just have to see other schools and see what they’re about, because I already know what USC is about, and I know where they stand right now, how that school looks, how they play, and where I would fit in at. USC has been a dream school for me. I still love them. I’d love to go there, so I’m just going to see how everything works out.”

Ahmed shines, has USC in top 5

One of the standouts at The Opening so far has been Kirkland (Wash.) Juanita two-way star Salvon Ahmed. Clocking a blistering 4.32 forty on Friday, he showed off his cover skills on Saturday, coming up with a beautiful pick-six in one of the early 7-on-7 games.

Also being recruited by some schools as a running back – where he lined up at USC’s Rising Stars Camp last summer – Ahmed has narrowed things down to a top 5, with the Trojans making the cut along with Oregon, Notre Dame, Stanford and Washington

When asked to discuss his thoughts on USC, Ahmed had plenty to say.

“Honestly, the tradition is awesome,” Ahmed said. “And I also like how they plan to use me, on either offense or defense — they like me as an athlete.  USC is a school I can see myself at outside of football, being successful. And I just like Coach Helton a lot. I have a great relationship with him.”