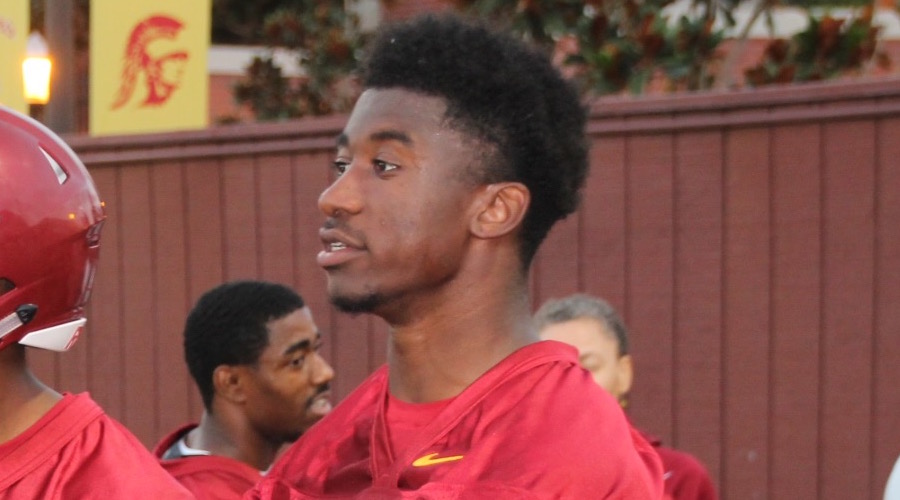 Senior tailback Justin Davis has been through more ups and downs than he can remember in his time at USC, but even he was left shell-shocked by the 52-6 drubbing that the Trojans’ suffered at the hands of Alabama last weekend.

“Losing like that just doesn’t happen at USC,” Davis said. “It’s not supposed to happen.”

And Davis, who is well versed in the tradition of USC football, is correct. Not only was it the worst season-opening loss in the history of the program, it was also the most lopsided defeat that the Trojans have been handed in any game since the 1966 matchup with Notre Dame, when the Fighting Irish won by a score of 51-0.

With the Alabama defensive front dominating the line of scrimmage, Davis and the rest of a Trojans running back corps that also includes talented sophomores Ronald Jones II, Aca’Cedric Ware and Dominic Davis struggled to find any room to run.

The No. 22 rusher on USC’s all-time list, the elder Davis was able to muster just two yards on seven carries, and the Trojans, as a whole, amassed just 64 yards on the ground – 46 of which came on a single run by Jones.

In order for USC get back on track this weekend with a victory over Utah State, Davis is well aware that the run game, which sets the tone for the entire offensive attack, has to get rolling.

Even more importantly, Davis also says that a change in mindset needs to take place.

“At points in that game I thought that everybody was asleep,” Davis said. “That pregame stuff where everybody was getting hyped, it was nowhere to be found.

“[Alabama] had a different mentality that allowed them to overpower us, and that’s the kind of mentality that we have to start having – that we’re the best and that we can go out there and beat anybody on any day, any time of the week.”

To the Trojans’ credit, however, the entire team did appear to practice with greater physicality this week – not to mention intensity. It was particularly evident during a late 11-on-11 period on Tuesday when junior wide receiver JuJu Smith-Schuster got into a heated scuffle with some members of the defense.

Rather than taking the incident as a negative, Davis saw it as an example of a player who isn’t willing to accept last weekend’s performance as the norm at USC, and he believes that it set a positive example that the rest of the team can feed off of.

“Everybody on this team should be mad,” Davis said. “That’s why I love what JuJu did. Because that’s not USC football, and for us to play like we’re supposed to, we just have to have a fire in our belly to never let anything like that happen again.”

One group that figures to be watched especially closely in that regard on Saturday is the offensive line, a unit that has taken a fair amount of criticism for their performance against Alabama. Davis was quick to point out, however, that his confidence in the unit hasn’t wavered one bit.

“I know they’re going to get it right,” Davis said. “That’s the best group in the nation. They made a couple mistakes here and there, but we have to be right there to pick them up. No matter if it’s making an extra guy miss or whatever. They’ve been busting their butts off all camp long, and it’s up to us to help them out on a couple plays. That’s going to make them play the next play harder.”

Coming off a big loss, Davis and the rest of the USC running backs don’t want to waste any time in turning things around this weekend when they square off against Utah State. But with the Aggies possessing an attacking defense that performed at a high level in the team’s 45-6 season-opening victory over Weber State, he certainly isn’t taking them lightly, and as the veteran of the group, he’s making sure that no one else does either.

“They’re going to give us all they’ve got,” Davis said. “They’ve got some great guys on the front seven. They do a whole bunch of schemes, they try to slant, there are a lot of blitzes, and we’ve got to be prepared. So it starts this week and we have to be really dialed in because if we miss an assignment in the game it’s going to be costly. We just have to focus on the details this week and make sure we know what we’re doing.”