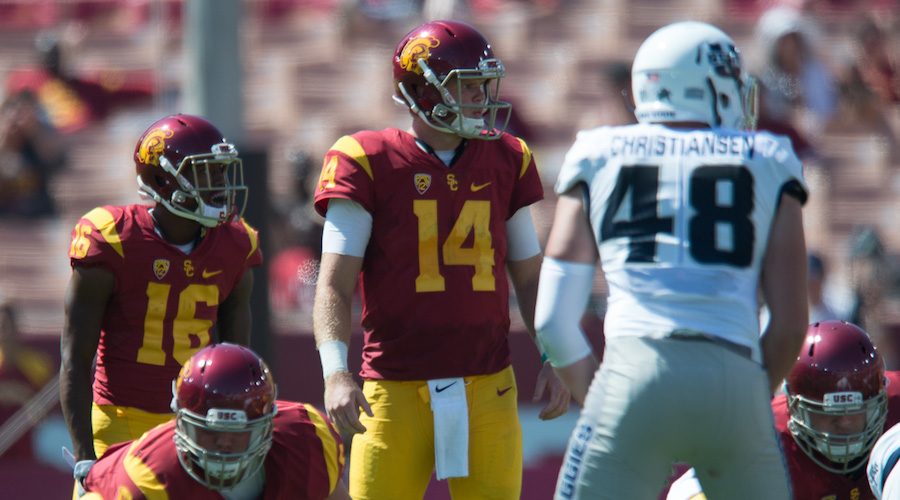 Directing the USC offense in front of a spirited Utah crowd last Friday night, Sam Darnold certainly didn’t look like a redshirt-freshman who was making the first start of his collegiate career – not if you were to judge him by his play, or just as noticeably, his cool, take-charge demeanor.

Inside, however, Darnold admits that everything wasn’t necessarily as it appeared – at least at first – but he wasn’t about it to let anyone else know that.

“It was my first time starting a college football game, and in that atmosphere it’s really nerve wracking, but you can’t show it to your guys, and you can’t show it to everyone watching the game,” Darnold said. “You’ve just got to be poised, and you’ve got to be able to make plays when they’re there. And after the first couple of series’, I didn’t feel nervous at all.”

Playing throughout the contest with that trademark composure which first caught the attention of USC head coach Clay Helton when he was recruiting Darnold as a prized prospect out of San Clemente (Calif.), his performance served as one of the few bright spots in an otherwise disappointing 31-27 Trojans loss.

Looking comfortable in the pocket, the 6-foot-4 signal-caller spread the ball over the field – even when under pressure – completing 18-of-26 passes for 253 yards, while also rushing for 41 yards and one touchdown.

“The [stage] was never too big for him, whether it was in high school, or whether it was playing against Alabama or Stanford,” Helton said. “And then you walk into a hostile atmosphere like this on a rainy night, and you go out there and do what he did, throw for 253 yards and then, oh yeah, add 41 yards rushing, I thought for a guy making his first start it was as good as you could hope for.”

And Helton isn’t the only person Darnold won over with his outing. Trojans player-after-player echoed Helton’s statements this week at practice. And while he’s undoubtedly happy to have gained the confidence of his teammates, for Darnold, the fact that USC lost the game still what stands out most.

“I think it is reassuring, but at the same time you’ve got to get wins,” Darnold said. “You know, as a quarterback you know your job is based off of how much you win. It doesn’t matter how well you play, you’ve just got to get those wins, especially when you’re up 24-10. You need to get those wins.”

It’s that team-first mentality that has aided Darnold’s lightning-quick development into a team leader after supplanting Max Browne in the lineup as the Trojans’ starting quarterback less than two weeks ago.

“I think I’ve been leading the team really well,” Darnold said. “Right now I’m just leading by example, and I think that’s perfectly fine. Coach Helton said that to me, he said, ‘just keep doing your thing. Don’t try to get outside your comfort zone when you’re trying to lead these guys, because what you’re doing right now is perfect. Just keep playing your style of ball, keep doing your thing, keep executing and you’ll be fine.’”

With USC now sitting at 1-3, Darnold knows that in order for the Trojans to turn this season around, the offense still has things to clean up – most notably turnovers. The Trojans fumbled the ball away on each of their first three offensive series’ against the Utes – one of which was committed by Darnold.

Not surprisingly, Darnold said that ball security was a major point of emphasis this week in practice.

“We fumbled the ball three times, and if we don’t do that I think we go down and score all three of those times,” Darnold said. “I think we have the guys, we have the weapons, we just need to execute.”

From the appearance of what the USC offense did with Darnold at the helm against Utah, there is definite reason to believe that if the offense does, in fact, come out and take better care of the football this Saturday, a victory could be well within reach.

And while the Sun Devils do rank dead-last in the FBS in passing defense (404 yards allowed per game), Darnold isn’t about to take them lightly, particularly given the fact that they possess a talented defensive front that has compiled 11 sacks this season – and one that figures to come after him early and often.

The Arizona State defense is also coming off a clutch performance, with the unit making two pivotal fourth-quarter interceptions in the Sun Devils’ emotional 51-41 victory over Cal.

“They’re a really good football team,” Darnold said. “A really good bunch, obviously, late in games. What you saw in that Cal game with two late interceptions, that was obviously huge for them.”

With the support of the Trojans team behind him, Darnold is looking to come up with another strong showing in what will be his first start at home in the Coliseum. Unlike last week, however, this time around he’s hoping it pays off with a win.