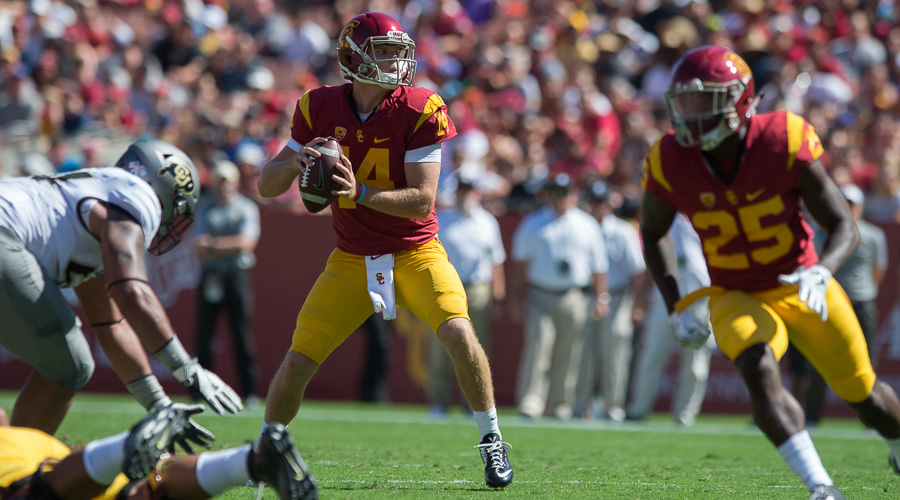 I don’t think there’s any question if you talk to fans who watched the 2016 USC season they will tell you that things absolutely turned when Darnold was inserted into the starting line-up for the Utah game.

The whispers had started long before that, however. They began in spring ball when Darnold would make the occasional play that would cause USC coach Clay Helton to say, “he is doing that without knowing what he’s doing yet, imagine what he will be when he knows what he’s doing”. Visitors to practice would watch Darnold side-by-side with Max Browne and, while Browne had certain attributes that had earned him a look, the play of Darnold caused at least one visitor to say, “what am I missing? It’s Darnold, right?”

Helton gave perhaps the biggest clue of all in fall camp when he said Darnold would win the Heisman someday. Those were some heady words, especially for a player who hadn’t even cracked the starting line-up yet and, as it turned out, would see only spot action in the first three games before Helton ultimately decided to make the move.

It’s not like Max Browne was a slouch. It’s been well-documented that Max was a former national player of the year in high school, a top-ranked QB who had waited his turn at USC and seemed poised to be the next one in line, but something happened along the way and by the time Max saw the field there was something missing. He was a little hesitant, there wasn’t much chemistry with his receivers and the ball simply wasn’t ending up in the end zone. It wasn’t entirely Browne’s fault as the offensive line was struggling to come together and the play calling didn’t seem to fit his skills.

When the move was made to Darnold there were a lot of questions directed at Helton. Had Max been given a fair shot? Was this a desperate switch in the hopes of saving a season (and a head coaching career) that was quickly headed in the wrong direction?

Darnold took the reigns for his first game on the road in the rain against Utah, and things didn’t start well with three straight USC turnovers to open the game. Panic time, right? Not for Darnold. Sam promptly led the Trojans on four straight scoring drives to put his team in position to win the game, but three long scoring drives by the Utes to close things out resulted in a painful USC loss.

For those who were paying attention, however, the signs were there that something special could be in the works with Darnold. He played with an attacking style, always on the go, with the ability to shrug off adversity and keep moving forward. It was exciting. It brought hope. Helton commented after the Utah loss about how much fun he had watching Darnold, he received some criticism from fans about making the statement after a loss but looking back with what Darnold has done it’s easy to see the specific reference Helton was making.

The Trojan coach saw the difference Darnold made when at controls of the offense, and it was definitely fun to watch. Suddenly the ball started being spread around to all the receivers on the field, the run game was producing behind as offensive line that began to live up to the pre-season expectations. And when things began to click for the offense, that energy spread over to the defense. No longer worried about needing to cover for an offense that had too many three-and-outs, the Trojan defense started to apply more pressure to opposing quarterbacks while taking away some of the top rushing offenses in the conference.

With Darnold at the helm the wins started to pile up for the Trojans, and his numbers were pretty impressive. By the time November rolled around the Trojans finished things off with a big win on the road against Washington, and then a pair of convincing victories over their rivals, and Darnold was named the Pac-12 Offensive Freshman of the Year with the #2 overall QB rating in the nation.

A national television audience will get a look at Darnold and the Trojans on January 2nd when USC faces Penn State in the Rose Bowl. They will see a 6-4, 225 quarterback who looks straight out of central casting as the leader of the Trojans, one who said he was “stoked” for the opportunity to be the quarterback at USC. It will be a familiar look for college football fans who are used to seeing the Cardinal & Gold in this setting but the road that was taken to get there in the 2016 season was anything but familiar, and it wouldn’t have happened without the move of Darnold into the line-up. Without Sam, who knows where things would have gone this year, but with him the result has come up Roses, and USC fans couldn’t be happier about it