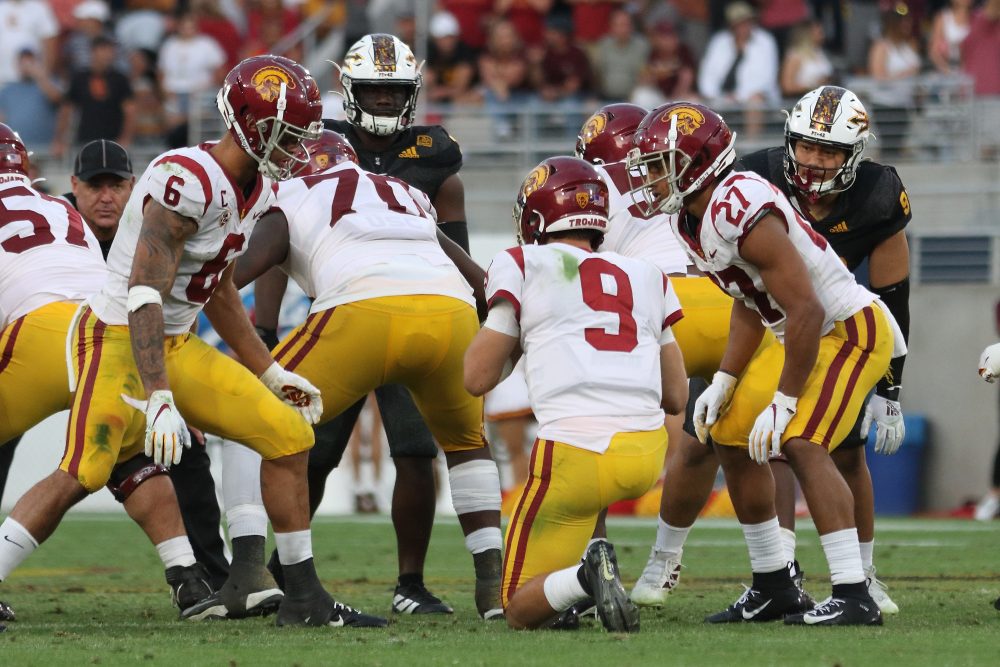 In a call with media on Wednesday afternoon, USC athletic director Mike Bohn, head football coach Clay Helton, quarterback Kedon Slovis and safety Talanoa Hufanga were joined by USC Athletics team physician Dr. Seth Gamradt to discuss the factors that went into the Pac-12’s decision to postpone all fall sports and the fallout within the program.

Dr. Gamradt, a member of the Pac-12 Student-Athlete Health and Well-Being Initiative Board said the conference had a “great plan” to approach a potential fall sports season, with weekly testing serving as the cornerstone. He said it was based on two assumptions–that there would be a decreasing caseload in Pac-12 cities and Covid-19 remaining as a relatively benign illness for student-athletes.

With the caseload in every Pac-12 city remaining elevated above a rate with which the conference was comfortable, plus myocarditis–inflammation of the heart muscle–presenting itself in several student-athletes around the country, the risks wound up weighing too heavily.

“We want to guarantee to parents that what we’re doing is safe,” Dr. Gamradt said. “We hope the cardiac issue turns out to be overblown, but the uncertainty gives us pause.”

Dr. Gamradt also mentioned the difficulties that would be associated with testing around 200 people in a traveling party every day, which would be required with the Covid-19 numbers in all or most of the Pac-12 cities.

Both Bohn and Helton were quick to point out that the decision came down to putting the health of the conference’s student-athletes first and “making that a priority.” Asked about the report that the University of Utah would lose somewhere around $50-70 million without a fall football season and Bohn said that sounded about right for the USC number as well.

The Trojans had a team meeting yesterday as Helton addressed the team. He said he explained the decision based on the medical information, adding that the players, the coaches and everybody involved with the team was disappointed and sad after the amount of hard work they’d put in this offseason to prepare for the fall.

Helton said that not only did he feel that this could be a very good team, but it was a group that had bonded very well together and become very tight-knit.

On Tuesday and moving forward, Helton said his plan is to have open and honest communications with players when it comes to the next steps, which would include remaining on campus to train with the team or potentially looking elsewhere if players are allowed to transfer without penalty to programs playing football this fall, or leave school early to begin preparations for next spring’s NFL Draft.

Helton said he didn’t feel that transfers would be an issue right now and that he’d already begun discussions with players who could opt out in some form. He said his advice is always for the player to take some time before making a decision.

“Take your time and get all the information,” Helton said. “Don’t make an emotional decision.”

USC has a few draft-eligible juniors who could elect to leave early, including offensive lineman Alijah Vera-Tucker, wide receiver Amon-Ra St. Brown and safety Talanoa Hufanga. Helton said he expects a decision from the NCAA by next Friday on eligibility decisions, though the NCAA Division I Council recommended today that student-athletes who have had seasons lost due to Covid-19 be given an extension on their five-year eligibility waiver and an additional season if 50% or less of the maximum allowed competitions are completed by athletes. Helton said USC would still look to sign a full allotment of recruits in the 2021 recruiting class and potentially the NCAA could give some added roster spots.

Bohn said the most positive thing to come out of yesterday’s announcement was “certainty,” as everybody involved now knows there won’t be football this fall, rather than wading through the constant questions about it that had been asked since spring ball was canceled in mid-March.

However, plenty of questions remain, starting with whether the Pac-12 will attempt to play a spring football season.

Dr. Gamradt had some hesitation.

“As an orthopedic surgeon, certainly that gives me a little bit of pause to play two football seasons in a calendar year, but it doesn’t mean that it can’t be done,” he said, adding that the hope would be to have a better understanding by then of the myocarditis issue related to Covid-19.

Helton said there were still a lot of questions to answer about the possibility of a spring season and that the conference could see where it was on Jan. 1 and then what the viable options would be. Hufanga said two seasons in one year would be tough on the body, but that there could be a way to treat the spring season like spring ball and make it work.

Bohn said USC’s testing results “speak for themselves” when it comes to keeping Trojan student-athletes safe and healthy, but acknowledged that starting up all 21 sports in the spring and designing a way to share facilities and training rooms would be “a Herculean task.”

USC quarterback Kedon Slovis wasn’t blindsided by the news on Tuesday, as he said he could see it coming from about a week away. But added that it was weird being at his lifting session just a few hours after the announcement was made official.

“It’s no good looking back and feeling sorry for ourselves,” Slovis said. “We have to stay focused. There’s a long ways to go if we want to win a National Championship.”

The disappointment in the voices of Slovis and Hufanga was evident, as the two are part of a program that sacrificed plenty this off-season to make sure those testing numbers–just eight positives in 666 total tests to this point–were as hopeful as possible. Hufanga said they haven’t been able to hang out at teammates’ houses or play video games together like they used to. He called it a tough time.

Slovis said it’s been strange not being together as a team, as he said that connection isn’t quite the same when he’s only around about a quarter of the team now.

“I have a new appreciation for being around those guys all the time,” Slovis said.