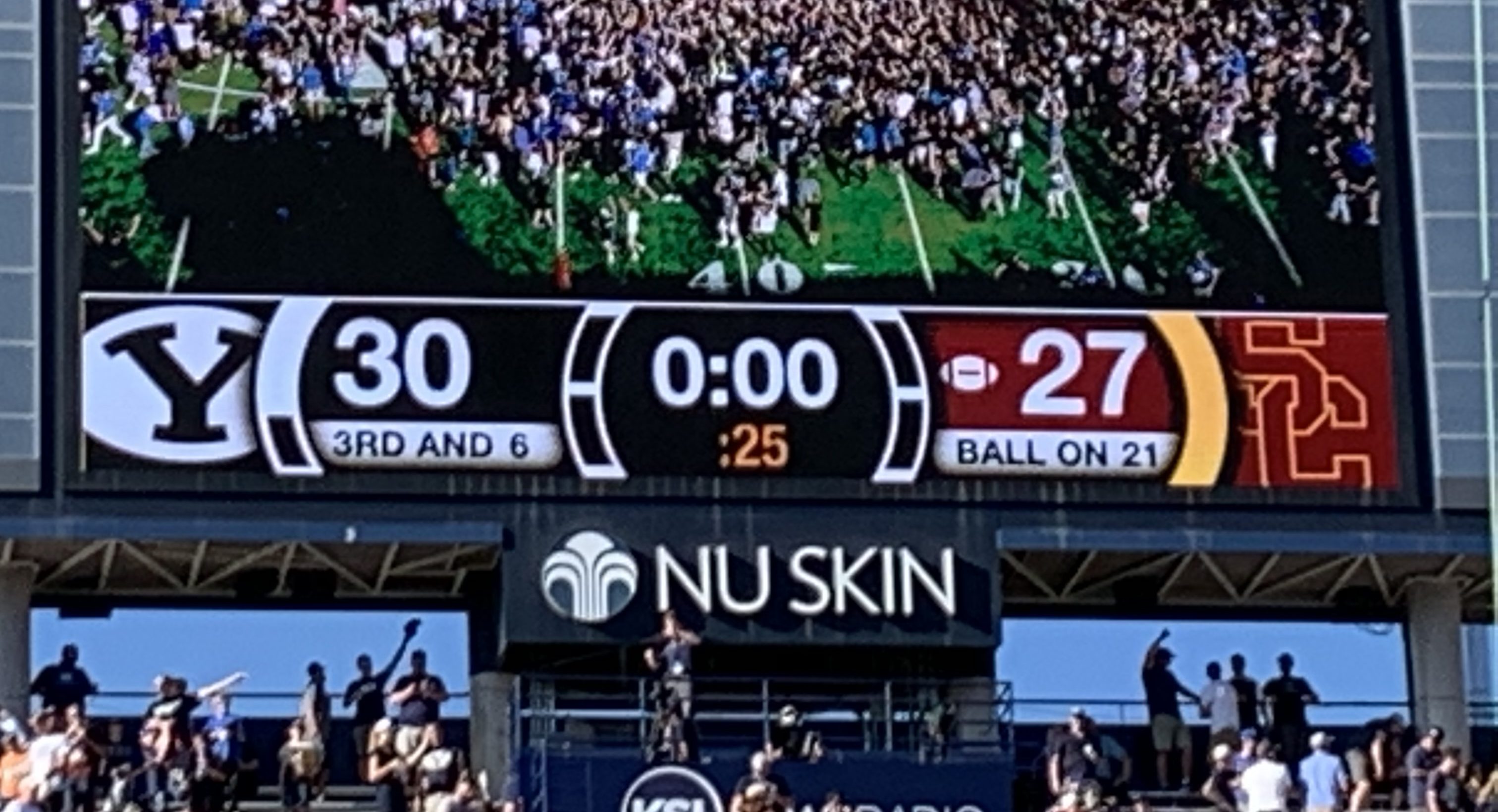 One week after it looked as though USC turned the page on a disastrous 2018 season, the Trojans looked like they were still stuck in last season during long stretches of a 30-27 overtime loss to BYU.

Turnovers, penalties, and tackling issues doomed the Trojans in this one, as issues that plagued USC last year again showed up.

True freshman quarterback Kedon Slovis made the first road start of his college career and finished the game 24-for-34 for 281 yards and two touchdowns. But three interceptions were too much for USC to overcome, as two early picks led to 10 BYU points, and the final one ended the game in overtime. One week after looking nothing like a true freshman in his starting debut against Stanford, Slovis had several plays where he looked very much like a first-year player against BYU. The promise is still there with Slovis, but certainly there will be several throws from this game that he would like back.

“They made one more play than we did tonight,” USC head coach Clay Helton said. “Anytime that you have three turnovers to the other team’s none, and you’re on the road, that’s going to put you in a hole. And tonight we came up one play short of getting out of that hole.”

It was a game where USC could never quite recapture the offensive rhythm they had on the first drive, where they went 74 yards in 10 plays, seemingly with ease.

BYU was comfortable sending just three rushers and dropping eight players into the secondary, and the Cougars were simply able to apply too much pressure on Slovis by using just those three down linemen, as nose tackle Khyiris Tonga dominated the USC interior line. Eventually, the Trojans turned to the ground game, as USC’s three running backs combined to run 41 times for 171 yards against a BYU defense that came into the game averaging 252 yards rushing on the ground.

Defensively, USC allowed 430 yards to a BYU offense that constantly hit the Trojans with misdrection plays, or had a quarterback in Zach Wilson who could consistently escape pressure and make plays outside the pocket. While he ran for just 10 yards total, he kept the USC defense off balance, and his scrambling ability led to deep completions down the field. BYU finished the game with the edge in passing yards, 299 to 281. In the season opener, Fresno State quarterback Jorge Reyna proved elusive in and out of the pocket against the Trojans. The issues there were still very much present against Wilson.

But tied 17-17 in the third quarter, USC’s defense came up big on a fourth-down stop at their own eight-yard line with just over a minute remaining in the third quarter. USC responded with a 13-play, 92-yard drive, finished with a 30-yard touchdown strike from Slovis to Michael Pittman.

Pittman finished with a game-high nine receptions for 95 yards and two touchdowns.

It looked as though that might start the celebration for the Trojans, but after a BYU field goal, USC self-destructed on the following drive. After a personal foul penalty on the kickoff return brought the ball all the way back from the 41-yard line to the 13, the Trojans were called for a holding penalty on second down and eventually punted. Three plays later–the first of which was a 35-yard heave by Wilson to a wide open Gunner Romney following some significant scrambling–the Cougars were celebrating in the endzone, up 27-24, following a 16-yard keeper by Wilson.

USC was able to force overtime with a 52-yard field goal from Chase McGrath with 1:43 remaining.

In overtime, the USC defense stood tall, driving BYU’s offense back a yard and forcing a field goal. USC’s possession was over quickly, as two runs from Vavae Malepeai netted four yards, then, after some confusion and a USC timeout, Slovis again threw into coverage and was intercepted on a ball tipped into the air.

It was fitting that the final turnover came on a third-down play, as the Trojans were just six-for-17 on third downs against BYU.

Malepeai finished with 23 carries for 96 yards and a touchdown, while Markese Stepp saw his first significant action of the season, rushing nine times for 53 yards and fumbling once, which he recovered. Stephen Carr had nine carries for 22 yards, as well as three receptions for 29 yards.

BYU found a way to shut down Amon-Ra St. Brown, who had just one catch for four yards.

The Cougars got it done with just about everybody offensively. Seven BYU players recorded carries, while 12 players recorded receptions, including Wilson, who had a 19-yard catch on a throwback to the quarterback.

Despite playing on the road for the first time this season, and doing so without starting defensive end Christian Rector and several backup offensive linemen, this was not a game USC could afford to let slip away, especially holding a 7-point lead into the fourth quarter.

The Trojans now must respond on a short week, as Utah comes to Los Angeles for a Friday night game. USC then hits the road to face Washington and Notre Dame, with a bye week in between.