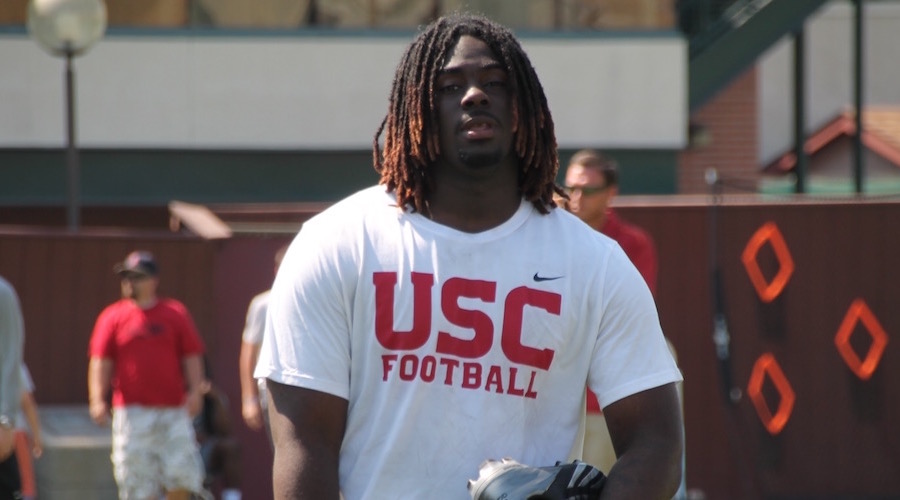 Elijah Conliffe was nearly impossible to miss during the Rising Stars Camp at USC last week, and not just because of the 6-foot-4 ½, 302-pound size that he brings to the table. The highly sought-after Class of 2017 defensive lineman was a force at both nose tackle and defensive tackle, especially during the 11-on-11 portion of the Wednesday session when he made his presence felt by making some big plays in the offensive backfield.

Coming from Hampton, Virginia, Conliffe’s appearance at the camp came as somewhat of a surprise to many, but having grown up watching the Trojans on television, he had a strong desire to check out the USC campus right from the moment that he received an offer from the coaching staff in early May.

“I always liked USC a lot,” said Conliffe, who holds over 25 total offers. “Then, when they finally offered me it was like, ‘wow, I live completely across the map from there,’ so I felt like I had to give them a closer look. I also heard that they have a really strong engineering program, and that’s important to me.”

Ultimately boarding an airplane for the first time in his life to make the trip out West with one of his high school coaches, Conliffe came away from the experience impressed, with the camp itself standing out as one major highlight.

“I finished the camp as one of the top defensive linemen there, so that was really big for me,” Conliffe said. “I also got to see a lot of the campus, and it was really beautiful. I like the atmosphere. I got to talk to most of the coaches, if not all of them, and I liked how they coached.”

It was USC defensive line coach Kenechi Udeze, a former All-American and NFL first-round draft pick, who made a particularly big impact on Conliffe.

“We talk a lot, and we have a pretty good relationship going now,” Conliffe said. “When he was coaching me at the camp, I really liked it. He coaches with a lot of passion, and you can tell that he cares about what he’s doing. I like the fact that he has experience, and that he’s played at the highest level.”

Conliffe also got a chance to talk to Udeze about where, exactly, he might fit into USC’s defensive scheme.

“He told me that he liked how versatile I am – I can play any of the defensive line spots,” Conliffe said. “So, if I went there I’d have a chance of playing early if I keep working hard.”

Another person who left a lasting impression on Conliffe was current USC defensive lineman Kenny Bigelow, who took on a coaching role during the camp.

“He was helping me out a lot during the camp,” Conliffe said. “That was really helpful to me, and that just shows me what kind of players they have there.”

While Conliffe obviously had a very positive experience at USC, he’s still completely wide open at this point. Now back home in Virginia, he maintains the same top 11 that he released earlier this month. Along with the Trojans, it includes Maryland, Miami (Fla.), Michigan State, N.C. State, Oklahoma, Ole Miss, Penn State, Tennessee, Virginia Tech and West Virginia.

Conliffe is hoping to trim that list down to five once his senior season begins, but maybe even as soon as next month, and he admits that the Trojans’ chances of making the cut have certainly improved because of his trip.

“I had a great time,” Conliffe said. “It does elevate them a lot on my list.”

In determining what schools do ultimately wind up in his top 5, Conliffe has some specific factors in mind.

“Academics, atmosphere and football,” Conliffe said. “I’m looking for a school that offers a really good civil engineering program, or engineering program in general. Atmosphere, a place that just feels like home to me. And then football – I want to play for a top D-1 school.”

In addition to USC, Conliffe also checked out Tennessee recently, and he could take more unofficial visits later this summer, but no concrete plans have been set at this point. Looking farther ahead, he hopes to be able to take all five of his official visits before he makes a commitment, although that could change.

“If schools start to run out of scholarships I might go ahead and cut the process short,” Conliffe said. “We’ll see.”