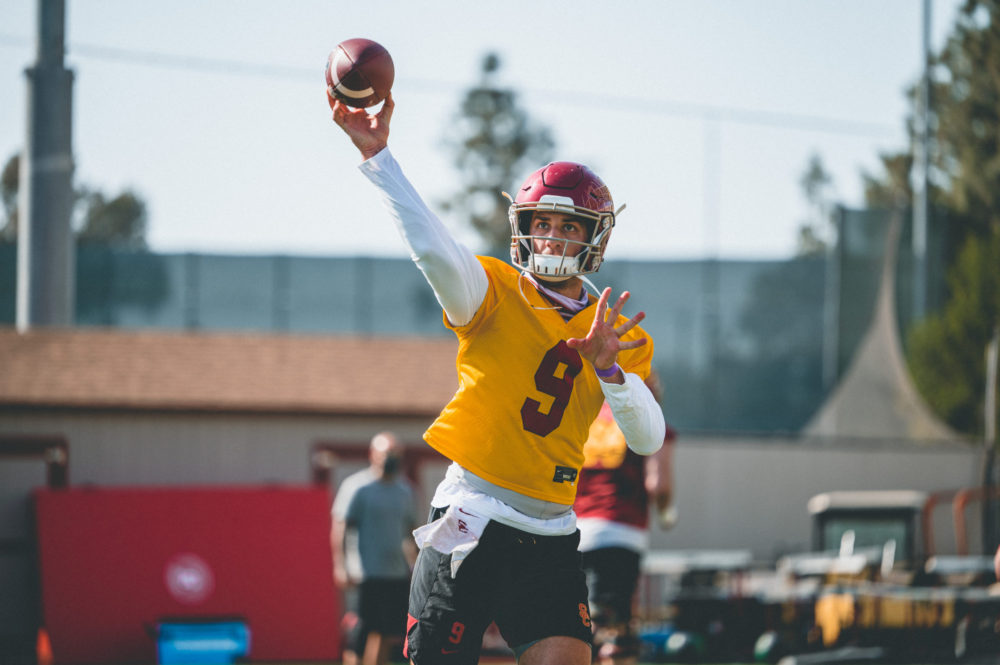 Things are looking up for the Trojans as quarterback Kedon Slovis seems to have regained the confidence that made him a first-year phenom.

Slovis left the 2019 Holiday Bowl after suffering an elbow injury that kept him somewhat limited for spring ball, but wasn’t supposed to linger into the season. But it was clear last fall that something wasn’t right with Slovis’ delivery, as footballs weren’t spiraling out of his hand with anywhere near the same consistency as the previous season. While it was often brushed over last season, Slovis said earlier this week that it affected his play, both mentally and physically.

When asked how his injury in the 2019 Holiday bowl affected him, Slovis said, “If I look back at the timetable, I still wasn’t a hundred percent…going into that first spring practice.”

And after that first practice he was sent home with the rest of the program, and had to spend the next few months working on his own. He had time at home to work through his injury, but going into that next year he never truly regained his first-year confidence. Slovis said he felt good overall, but he wasn’t in a place where he felt truly confident as a thrower. Coming back from the injury was tough as he continued to establish his health and confidence.

“If you have confidence you’ll play better,” Slovis said.

Slovis was terrific in his first season, but with injuries and a schedule altered by a global pandemic, his second season didn’t live up to the same lofty standards set by his stellar play. He led impressive comeback wins, but wasn’t as dominant as his first season.

Obviously, his second season had an offseason that mostly took place on zoom and a shorter sample size of regular season games, but there are still some numbers that are telling. The most jarring statistic is that Slovis’s quarterback rating was 167.6 in 2019 compared to 144.1 in 2020.

“I think going into that next year, [I] never really got that confidence I want throwing the ball,” Slovis said. “Even though I felt good and thought I got to a place that would be sustainable for a football season, it wasn’t really a place where I felt confident as a thrower.”

“My whole life I’ve been pretty confident in my accuracy and me throwing a football,” Slovis said. “Last season I’d say for the first time I wasn’t there entirely.”

After going undefeated during the pandemic-shortened season, the Trojans were not able to win the Pac-12 Championship in their final game of the season as Slovis left with yet another arm injury.

Over the offseason, he worked with three of the individuals from 3DQB, a company that works to create efficient quarterbacks while focusing on long-term health and maximizing performance.

These coaches included CEO and USC alum Adam Dedeaux, USC motion mechanics instructor John Beck and Motion Performance expert Taylor Kelly. They all work with the legendary USC alum Tom House, who is also a former MLB pitcher with a PHD and more commonly known as “a professor of throwing.”

House and 3DQB have worked with star NFL quarterbacks including Matt Ryan, Drew Brees and Tom Brady on throwing mechanics. This puts Slovis in excellent company to perfect his long-term throwing motion. Slovis referred to these coaches as being the best biomechanical trainers in the business. He noticed a major improvement after only four or five sessions with them.

Not only did these coaches help Slovis get back to where he wanted to be, but Slovis said they helped him create power more efficiently so he can throw 100-150 balls without getting tired.

Slovis smiled while mentioning that he can now throw without hurting his arm and simultaneously not sacrificing accuracy, velocity and arm strength. Slovis elaborated that his throwing motion last year made his arm hurt and get tired easily.

“The biggest thing is [going] into this season knowing I can throw the ball as well as I want and as hard as I want [without having] any issues on the back end with arm fatigue,” Slovis said.

Slovis throwing the ball was definitely not USC’s only problem in the passing game last year as the offensive line was unable to provide Slovis with proper protection throughout the season.

USC head coach Clay Helton commented that keeping their quarterback upright and protected will be one of their primary goals this season. Helton also mentioned the team gave up 15 sacks on the season, which was one in every 17 throws, to emphasize his point.

But Helton was quick to praise Slovis as well, and it sure looked like the old Slovis showed up during Tuesday’s first spring ball practice.

“The quarterback position is always about having skill set, and then experience and reps,” Helton said. “Obviously we have a quarterback in Kedon that has an amazing skill set.”

Helton believes that having a more normal offseason with 15 practices during spring ball, along with summer workouts will greatly enhance Slovis’s success.

“I’m looking forward to having the opportunity to watch him with Graham and our coaches over the next two training camps,” Helton said, adding that the slower, more deliberate pace of this season’s prep should be a big boost compared to the rushed schedule of last year.

Skyler Trepel is currently pursuing his Master’s in Sports Journalism at USC, where he is a sports anchor for ATVN, reporter, NBA columnist and podcast host, producer and editor for Annenberg Media. Skyler is also a writer for LakeShow Life, host of the interview-style Mamba Moments podcast on the Bleav Network and co-host of the Shooting Bricks podcast, along with multiple guest appearances. As a lifelong sports fanatic and experienced multimedia journalist Skyler has a passion for the excitement, inspiration, and perseverance of the human spirits through interviews and storytelling within the realm of sport.