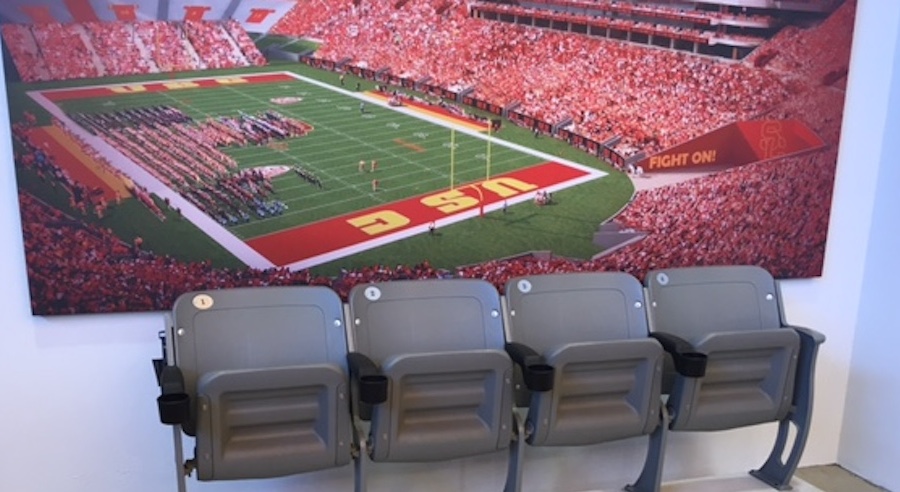 The information brochure for Coliseum seat relocation plans has been sent out to Trojan Athletic Fund members, and it includes a lot of details on what we will see moving forward.

* The stadium capacity will be reduced from 93,607 to 77,500. The university said the average attendance for the last 15 years was 77,400 but that number wasn’t used to calculate the new capacity.

* Work is scheduled to be completed in time for the 2019 season.

* The university has brought in the Legends group (Dallas Cowboys, NY Yankees) to work with them on project. Legends already handles Coliseum concessions, and they have worked on recent stadium projects at Notre Dame and Oklahoma, among others.

There’s little doubt the Grey Lady needed a face lift and the vast majority of these changes are welcome. One fact I heard that resonated is that the stadium was built in 1923 when the population of Los Angeles was 577,000.

Among the other changes are replacing every seat (they are still choosing between 3 options in terms of style of seat) and there will be cupholders attached to the back of the seat in front of you. There will be wider aisles, more legroom and handrails to help navigate the stairs. There will also be state-of-the-art Wi-Fi inside the stadium. Concessions and restrooms will be upgraded and electrical, mechanical and plumbing systems will be replaced.

I think all of the items above are good, they were needed, and I look forward to seeing them in place, but there are two issues that have been the primary cause of concern by fans to this point (seat relocations and the Tower structure).

There’s no getting around the fact that this is going to be a tough process for a lot of ticket holders who have been sitting in the same seats for many years, with the same crowd of people around them, and have no desire to move.

As part of the reduction in stadium seating, the entire Coliseum will be re-seated in time for the 2019 season. It will be a game of musical chairs that starts with the 9,000 people whose seats are located directly below the press box in the area where the Tower will be located. It’s an interesting mix of people in that location ranging from the highest level donors who enjoy their prime midfield seat location, to various corporate partners, former faculty or players who have been in those seats for years but may not be part of the TAF program. The athletic department will call and meet with those ticket holders to find new locations to move to, and then they will approach others in order based upon TAF membership level and past donations. It’s a process that is estimated to take 15 months.

One big question a lot of people have is regarding the “restoration gift”, a payment that many are looking at as a “PSL”-type arrangement. There will be gifts required for the TAF seat locations (which will cover 1/3rd of the stadium) but no payments for the general sections that include the remaining 2/3rd seats. The “restoration gift” range is from $6,000 per seat for Scholarship Club members to $100 for Trojan Club (a section of Trojan Club seats in west end zone will have no charge). There is a one-time provision for passing seats along to family members, and the payments can be spread out over four years.

Two groups that will not get moved are the student section and the Trojan Marching Band. The band will stay in the bleachers they are in now, and there will still be the field level suites below them (the Audi suites currently below the Peristyle will be there for the next two years but will not be there starting with the 2019 season).

The item we’ve heard the most angst about from fans is the Scholarship Club tower, and nothing about these plans is going to alleviate the concerns of those who are worried about the imposing presence of the design. It’s a big structure, seven stories tall, and it will extend inside the stadium to the current row 42. We were told that other design options were considered (such as building the structure outside the stadium wall similar to the Rose Bowl) and part of the reason for doing it inside was based on input from the Conservancy Commission, which was brought in by USC to help insure the stadium would maintain historical landmark status.

A question that got answered is the issue of potentially having obstructed views for seats directly on either side of the Tower. There are no current plans to sell those seats (it’s a small section that angles away from the tower) but the university said they could end up selling them for big games as “obstructed view” locations.

As for the various suites within the Tower, there will be a total of 2,200 seats and 73% of the inventory has been sold. The design style will be similar in a lot of ways to AT&T Stadium with a lot of bells and whistles for those 2,200 people. A large glass wall will face south toward MLK Blvd and there will be additional elevators, Pat Haden stressed during the planning stages that he didn’t want people waiting in line for elevators.

2017: New video boards installed on either side of Peristyle

2018: Begin work on Tower area, with those 9,000 seats being taken out for the season, and the press box being unavailable (a temp area will be placed at bottom of section, row 42, for media to work during the season).

2019: The off-season will finish work on the Tower and other seats. Stadium ready for 2019 season.