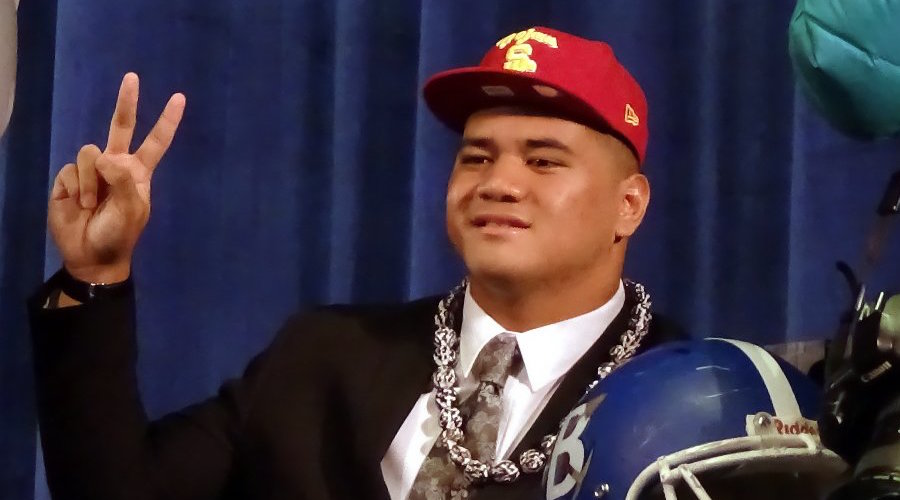 Riding a wave of momentum created by his team’s dramatic turnaround on the field this past season, USC head coach Clay Helton and his staff closed with a flurry on National Signing Day to help the Trojans pull in a stellar recruiting class.

Adding to a group of five early enrollees who are already on campus, the Trojans signed a total of 18 additional prospects from the Class of 2017, including six heralded prospects who didn’t announce for USC until Wednesday in tight end Josh Falo, offensive lineman Austin Jackson, cornerback Greg Johnson, linebacker Levi Jones, wide receiver Joseph Lewis and defensive tackle Jay Tufele.

“What a great day to be a Trojan,” said Helton as he opened his afternoon press conference.

The Trojans head coach would go on to note that what impressed him most was not just the way that his staff was able to finish, but the fact that they didn’t lose one single prospect whom they entered the day holding a verbal pledge from.

“As a coach you hope to keep all of your commitments,” Helton said. “You know, it’s hard to do. To go into today and not lose one kid that was committed on signing day, and then gain some kids that you knew were so talented that you knew you were going to be in battles with other great universities around the country, and to be able to get those signatures, it was one of those special days.”

21 of the 23 prospects that make up the Trojans’ final signing haul reside in the Western region – something that didn’t happen by accident.

A collection filled to the brim with big-name stars, the Trojans’ class finished the day ranked No. 4 by 24/7, No. 5 by both ESPN and Scout, and No. 6 by Rivals.

More important than the rankings, however, was the fact that it helped to address a number of holes in the Trojans’ current roster that needed to be filled.

“As a coach you can’t necessarily get caught up in the stars or the rankings,” Helton said. “The fact of the matter is that we had a successful season last year, but at the end of the day USC is about winning championships. We finished third in the country, but our ultimate goal is to finish No. 1, and to be able to do that we had to meet some needs right from the get-go in this class.”

Noting that he believes championships are won in the trenches and on defense, Helton said that one specific position group that was bolstered was Kenechi Udeze’s defensive line unit.

“When you lose Stevie Tu’ikolovatu, you know that you’re going to have to bring some big men in,” Helton said. “To have a Marlon Tuipulotu come in, a Jay Tufele, a Brandon Pili and Jacob Lichtenstein, and then to bring a great edge rusher in with Hunter Echols, we really felt we bolstered that defensive line group in this class.”

Just as significantly, Helton and Co. were also able to shore up the USC offensive line corps on Wednesday.

“Losing two tackles in Zach [Banner] and Chad [Wheeler], along with Damien [Mama] going out early to the NFL, we really felt like we had to bolster that group,” Helton said. “To bring in Andrew Vorhees, who is already here on campus, and to add Austin Jackson, Alijah Vera-Tucker and Brett Neilon, we really feel like that is an especially talented group that can come in and help us.”

While everything seemed to be going the Trojans’ way throughout the day, according to Helton, it wasn’t completely lacking in drama behind the scenes. That was particularly the case early in the day with Jones, who didn’t inform Helton that we would be inking with USC until just before he went on television to make his decision known. When he finally did announce for the Trojans, he did so only after first pulling off Florida and Florida State shirts before revealing a USC shirt underneath.

“I knew that we were in a battle with some really fine universities and some good coaching staffs, and then right prior to him going on T.V. he texted me and said, ‘Coach, I’m a Trojan,’” Helton said. “Thank God he texted me. I would have had a heart attack right there.”