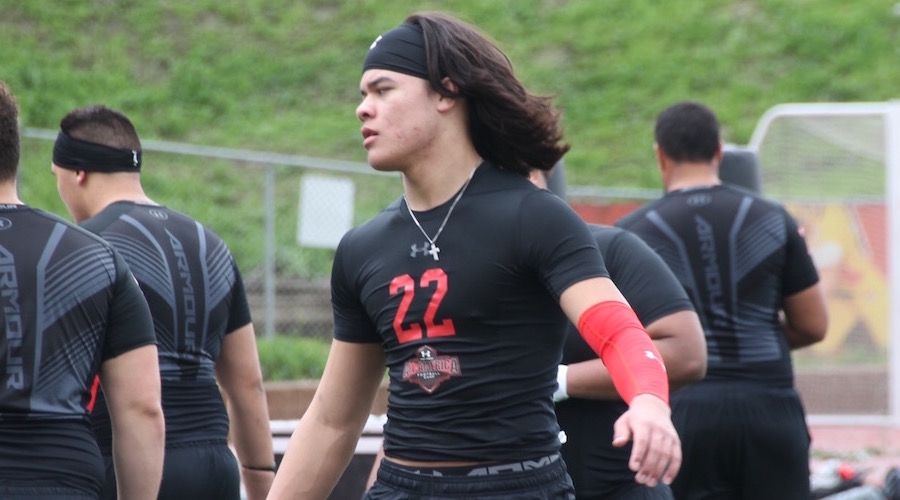 With the spring evaluation period under way, here’s a look at 10 out-of-state Trojans targets from the Class of 2018 who are currently uncommitted to keep an eye on.

Angilau was offered by USC at the end of March, and it’s safe to say that the big lineman has plenty of interest in the Trojans. The fact that he’s been to campus on at least three different occasions provides evidence of that. Big and physical, some schools are recruiting Angilau for the defensive side of the ball, but USC wants him for the offensive line.  BYU, Oregon, Texas and Utah are some other schools in the mix, but the Trojans look to have a great shot here.

Carman is easily the biggest long shot on this list. Arguably the top offensive tackle prospect in the nation, he’s going to be tough to steal away from Ohio State. The Trojans staff is pursuing him extremely hard, however, and he’s expressed a definite desire to check out the campus and the California weather this summer. The Trojans made his initial top 10 list along with the Buckeyes, Alabama, Clemson, Florida, LSU, Michigan State, Notre Dame, Tennessee and Wisconsin.

Due to the fact that Cota’s father, Chad, played for Oregon, most assume that the Ducks are in the drivers seat for Chase. But with the younger Cota having visited the Trojans campus on a number of occasions now, there are strong indications that USC has a legitimate shot. He’s had a strong offseason, shining at the L.A. Opening Regional – an event that was loaded with talented wide outs.

Hufanga is a big, rangy safety prospect who could also potentially grow into a linebacker down the line. He was a fan of the Trojans growing up, so they have that working in their favor, but his recruitment is still wide open. He recently visited Nebraska, Alabama and Oregon, and he’s also considering Oregon State, Notre Dame, UCLA and others.

Ohio State is likely the team to beat for Jackson, but he’s another player who was at USC this spring, and they are definitely in the discussion. UCLA, Florida and Oregon – where he’ll visit this weekend – are also under consideration. He’s being targeted as an outside linebacker by some programs, but the Trojans like him at safety – where he’d prefer to play on the next level.

A former BYU commit, Latu likely projects to the predator outside linebacker spot at USC. He visited the Trojans recently, and USC is a school that he always mentions when discussing his favorites. Set to possibly make a decision by the end of the summer, Alabama is also very much in the picture, as is Notre Dame, Oregon, Utah and Washington. BYU – where his brother is still committed – isn’t out of it yet either.

USC running backs coach Deland McCullough is coming after Salahuddin hard, and while it’s still early, the talented tailback currently lists the Trojans as his leader, and he plans to make an unofficial visit to campus this June. Earning positional MVP honors at this past weekend’s Washington D.C. Nike Opening Regional event, he’s also looking at the likes of Arkansas, Maryland, Nebraska and Oklahoma among others.

Sewell is a mammoth-sized talent who could wind up at tackle or guard on the next level, and the Trojans are doing very well with him. He’s already taken two unofficial visits to USC this year, and he’s given rave reviews of the experience on both occasions. Arizona, Arizona State, BYU, Oregon, UCLA, Utah and Washington are some of the other schools in the mix.

Togiai recently released a top 8 that included USC as well as Wisconsin, TCU, Ohio State, Washington, Utah, Penn State and Michigan, and the Trojans are definitely in good position here. Having received an offer from USC in January, he quickly followed it up with a visit and was impressed with what he saw. A big, bruising defensive tackle, he’d pair up nicely with Tuli Letuligasenoa in this class.

Another player who likely projects to the predator outside linebacker spot, he took an unofficial visit to USC just this past weekend, and he’s developed a solid relationship with the Trojans coaching staff since receiving an offer from them last summer. There is a long way to go in his recruitment, however, and the Trojans are battling the likes of Nebraska, Oregon and UCLA – where his teammate Greg Rogers recently signed – just to name a few.