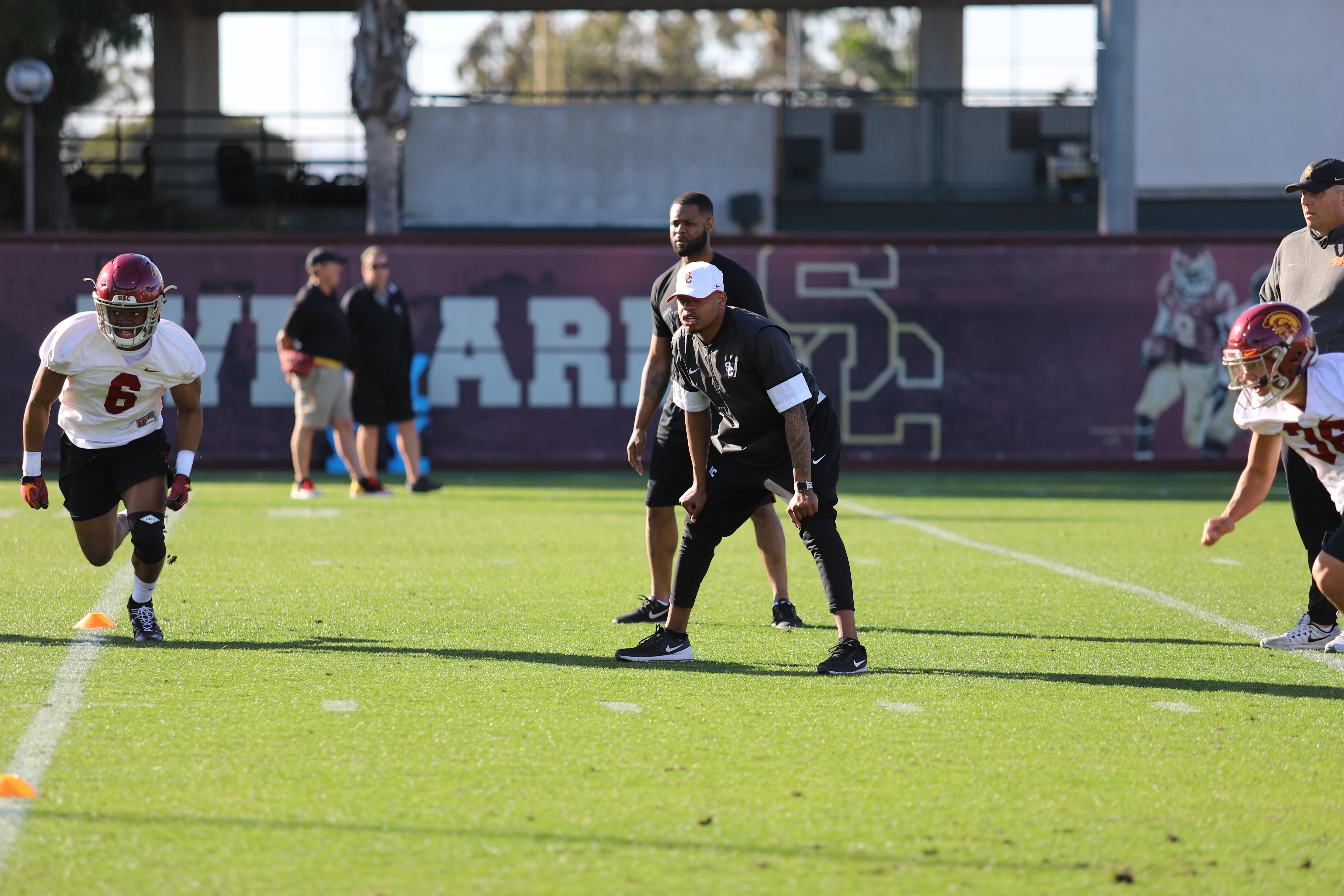 The USC secondary suffered massive personnel losses in the secondary off of the 2018 roster, as transfers and graduation removed seven defensive backs from the program. And while help is on the way in terms of addition bodies added through the 2019 recruiting class, one of the biggest additions to the group will be limited to the sidelines this fall.

Technically, Chris Hawkins’ coaching career began just before this past spring ball, but truthfully, he’s been a coach a lot longer than that. Now a graduate assistant working with the defensive backs, Hawkins said he quickly found a way to use his experience as a former player.

“When I was here my junior and senior year, I was a coach on the field,” Hawkins said. “We had DB coaches and a coordinator who did a great job, but on the field, in the heat of battle, I was the guy making the calls.”

Over at least the past decade of USC Trojan players, there hasn’t been a more slam dunk future coach than Hawkins, who appeared to be on the path even as a high school recruit. Everybody from reporters, to opponents, to coaches, to players knew it. And luckily for the Trojans, Hawkins knew it as well.

“I love the game of football, and I felt like, no matter if I played in the NFL or not, I always felt like my role would be bigger than just playing,” Hawkins said of why coaching speaks to him so deeply. “I always wanted to get guys in the right positions to do the right things. I was pretty good at that as a player. Now I want to see how good I can be as a coach.”

Following his senior season in 2017, Hawkins signed with the Seattle Seahawks as an undrafted free agent, but when that didn’t work out, Hawkins already knew his next move.

“The first thing I did was come to coach Clay [Helton] and tell him that I want to be a GA,” Hawkins said. “Because I knew that at the end of the day, I wanted to coach football, whether that was starting at the high school level or starting here as a GA, I knew I wanted to do it.”

Hawkins arrived at USC along with new defensive backs coach Greg Burns, and the two developed a strong connection right away, leading an extremely inexperienced group of defensive backs to a strong showing during spring ball.

“Coach Burns is great,” Hawkins said. “We’ve had a very good relationship from the get go. We attached pretty quickly here, to the point where I feel like I’ve been with him for three years when it’s only been four or five months. I can kind of feel what he’s sensing throughout the day and I make sure that it gets done before he even asks me for it.”

The life of a graduate assistant is not an easy one. Hawkins said he arrives at USC around 5:45 so that he can get in a workout before starting a day filled with classes–Hawkins is studying communications management–and making cutups and charts for his position coach and other defensive coaches.

“We do a lot of the grunt work,” Hawkins said of himself and fellow defensive graduate assistant Michael Hutchings. “But I don’t want to call it grunt work, because in football, I don’t feel like anything is grunt work. But it’s all the work so that everything runs smoothly. We make sure the defensive coordinator’s job is easy, the defensive backs coach’s job is easy.”

Hawkins meets with individual players throughout the day to make sure they are all clear on the calls and defensive responsibilities, adding that having played with several of them and serving as something of a big brother to many of them helps the relationship.

“Being a past player, I know what it feels like getting a lot of calls thrown at you, and so does Mike,” Hawkins said. “So we make sure our specific players, when they go into practice, their head isn’t spinning. Especially freshmen.”

One aspect of the USC defense that received plenty of attention this spring was the proposed simplification of the defense. For someone like Hawkins, who says he knows this defense like the back of his hand, simplifying still has its advantages.

“When we say simplifying a defense, we want the same guys doing the same things every time,” Hawkins said. “Football is a thinking game, but if you can take half the thinking out of it, you have guys who can play faster. And with a young group like this, you’d rather them play fast than to be thinking. If we’re playing fast, then we’re playing the right way.”

If you’re looking for a way to describe this secondary heading into 2019, Hawkins described it thusly.

The USC secondary will head into the 2019 season with 12 total starts combined, and no player with more than five. Former cornerback Iman Marshall had 36 starts heading into his senior season, while Hawkins himself had 22.

But Hawkins was pleased with what he saw from the group this spring, saying there are some “good, young pieces right now.” He specifically mentioned that cornerback Greg Johnson practices as hard and with the most effort of anybody in the secondary. He added that both Isaac Taylor-Stuart and Chase Williams made great jumps, true freshman Max Williams is already one of the smartest guys in the room, and Briton Allen is a hard-hitter who just needs to learn the game a bit more. Moving forward, Hawkins said it’s about taking those next leaps for everybody in the unit.

And he considers himself part of that group, as he learns how to become a more complete coach. Hawkins already turned down offers to become a cornerbacks coach elsewhere, saying he knew he wasn’t quite ready for that.

“My coaching philosophy isn’t fill out, nor do I have the experience to say that I can really honestly run my own room the proper way,” Hawkins said. “I know football and I can talk Xs and Os, and I know how to get everybody lined up and everything. But do I know how to be a fulltime coach yet? I can’t say I fully know how to do it, but that’s what I’m learning how to do from coach Burns.”

What Hawkins does know is what winning looks like, as he won a Rose Bowl and a Pac-12 Championship while at USC. Added to coach Burns, who won a national championship while coaching defensive backs at USC, this duo has a good idea of what success feels like.

“A lot of these guys, especially the young guys, are coming off a five-win season,” Hawkins said. “But the team didn’t look like a five-win team this spring. I wasn’t part of it last year, but they don’t look like a five-win team. Coach Graham [Harrell] coming here, simplifying the offense. The offense is playing super fast. The defense is playing super fast. We have the talent to beat anybody in the country.”

Moving beyond this year, Hawkins has an impressive goal for his coaching career as well, saying he wants to be a head coach one day. But hopefully not before one more specific stop.

“As of right now, I plan on, somewhere in my career, being the defensive backs coach at USC,” Hawkins said. “I don’t know whether that’s in a few years or later down the line.”