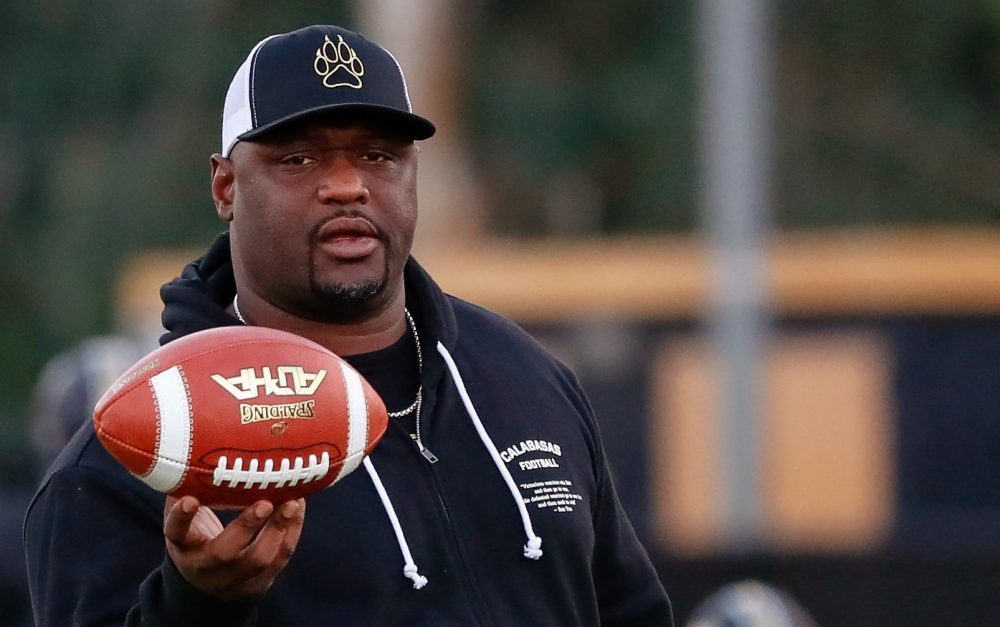 In an offseason full of additions to the USC football program, bringing in Chris Claiborne as an offensive quality control analyst should get special recognition for just how much of a positive move this will be for the present and future of Trojan football.

When Claiborne can finally step on campus for the first time in his new role, there will likely be a strange mix of Big Man on Campus and unsure freshman. Nobody on the staff wields more football pedigree than Claiborne, who has been inducted into the USC Hall of Fame and is a Butkus Award winner, Pac-10 Defensive Player of the Year, first-round NFL Draft pick and an eight-year pro. There is also nobody on the staff with less experience in their role as Claiborne–that would be none.

But the USC defensive legend who wore No. 55 and former Calabasas High School head coach brings plenty of outside experience to this position, and is thrilled to get his college coaching career started at his alma mater. It’s something that had been on Claiborne’s mind for a while, and with his degree in sociology finished last fall, he reached out to head coach Clay Helton. His hiring process had been in motion for a while–finalizing the defensive staff and other things on the internal checklist delayed the hiring a bit–but Claiborne’s official start date was June 1.

“I’m excited, so excited,” Claiborne of joining the USC staff. “You try to set up goals for yourself in life and this was a goal when I went back into coaching.”

Claiborne’s role as a quality control coach is slightly limited in its scope. He is unable to serve in the same role as an assistant coach, which means he can’t spend time with players breaking down film or teaching X’s and O’s, whether in the film room, the practice field or during a game. He’ll work with the offensive coaches on breaking down opponents’ defenses. He can provide guidance to players about off-the-field issues or motivation to them on the field. And he said he’ll do anything else the coaches ask of him.

“I’m a new guy,” Claiborne said, “It’s like a new kid at a new school. You’re trying to figure out where you fit in, who you’re going to hang out with…I’m here to just learn. Anyway they need me to help, I want to be able to do that.”

There’s truth to that, and a whole lot of modesty.

Claiborne will certainly need to learn the day-to-day aspects of the job. Working closely with the offensive staff will likely be a little eye-opening as well for someone who spent their entire career on the defensive side. But his experience there should be hugely beneficial for offensive Graham Harrell and staff. Claiborne said he’ll likely be breaking down opponent defenses and letting the offensive staff know what he sees as far as what defenses are trying to do, tendencies or weaknesses. Talking football and breaking down schemes is something that come naturally to Claiborne, and he’s looking forward to joining a group that could bring a different perspective to what he’s seeing.

“When you look at it, it helps my career,” Claiborne said. “A lot of guys don’t get the opportunity to sit on the other side of the field and learn from a group playing at this level. For me, it was a win win.”

The modesty aspect comes in when Claiborne undersells just how valuable he will be as a resource for the entire roster and program. Anything he needs to learn on the job will be more than made up for in what he already brings to the position.

“The head start for me is being able to talk to the kids,” Claiborne said of his ability to form relationships and truly communicate with players at this level. “That comes from my time in high school…In high school, that’s the part you really do, help these guys off the field, because that affects your on-the-field play. Anywhere I can help as far as counseling and putting them in situations that will help them, I hope that also helps them in their game and to accomplish their goals anyway they can–whether it’s a conversation about life or classes, I can do that. For me, that’s part of fulfilling my role.”

And that’s not just talk from Claiborne, who founded University 55, a non-profit dedicated to helping youth succeed on the field, in the classroom and throughout life, and he has served as a mentor and coach for the past decade.

Claiborne will also likely serve as a strong link between USC’s past and future. He said Helton has been receptive to former Trojan football players coming to practice and being around the program, but Claiborne is looking to increase their presence. It means something for these players to consistently be around Trojans who have had the success their looking to achieve. USC can roll a football alumni directory out there that’s as impressive as any program and making sure there is a connection between the current players and those who have come before them is important.

“It’s important to have those guys come,” he said. “When we were at practice, having a lot of those guys come to practice, every day was competitive as well. There were no days off because people were watching, and we didn’t even have social media. It was important that you competed every day. So I hope the guys come around because it’s always great to see them and you never know what could come out of it.”

Claiborne is also going to be a major contributor to USC’s recruiting success. The Trojans have already built a top-5 2021 recruiting class thanks to a restructuring of the recruiting department and an emphasis from the new defensive coaches and the staff as a whole. Claiborne’s ability to connect with recruits and to serve as an example of what is possible at USC will serve him well as he pitches USC to prospects. While he is unable to participate in off-campus recruiting or initiate phone calls to recruits, he can be present for everything done on campus. He hasn’t been at USC recently, but he is well aware of the permanence of what USC has to offer.

“USC will always be able to offer you that it’s USC,” Claiborne said. “Every time you step on the field, you’re considered a high-level player at a high-level university. It’s always going to be a great degree with awesome alumni. Those are things that will always be there for you, no matter what. How you deal with it on the field is up to you–if you play at a high level, you’ll be rewarded, likely with the NFL and maybe you can win some awards to take with you–along with getting your degree and using the network that’s there for you. Those three things at USC never change.”

Claiborne has been able to participate in a position meeting with the wide receivers in the early going of his tenure, but without being able to be on campus and meet players and coaches face to face, it’s been something of a slow start.

“I just want to get in the building and sit down at a desk,” Claiborne said. “Until you get to see them in person and have a chance to break bread with them, you don’t personally know them. So I’m excited to get where we can be in the building and see people every day.”