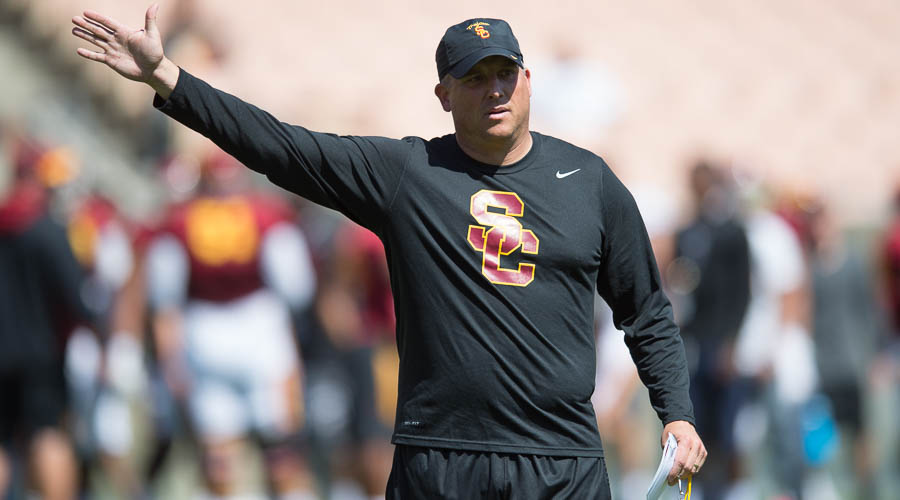 Clay Helton makes it sound as if it is an extremely difficult decision. It really isn’t.

Max Browne should be his guy.

Browne and Sam Darnold, the promising redshirt freshman, engaged in a lively quarterback competition all spring at USC, but the only way Darnold could win the job was to be overwhelmingly impressive while clearly separating himself from his older, more experienced counterpart.

Darnold was good, but not that good. By all accounts, he eventually will become a Trojans’ starting quarterback and likely one that will bring a fresh, new dimension with his intriguing ability to run.

It just shouldn’t happen this year. At least not at the beginning of the year.

Browne has earned the right to start the season opener against – gulp! – defending national champion Alabama. This is a former national prep player of the year who has spent three long seasons patiently waiting for his opportunity.

There were many times during that three-year period when Brown would look just as good, if not better, than Cody Kessler in practice. His feathery soft touch on deep passes would often draw ooohs and ahhhs from observers on the sideline.

But never, not once publicly, did Browne complain. It had to frustrate him. It had to gnaw at him regularly. This is a kid with an NFL body who was rated above every other quarterback in America coming out of high school, including Jared Goff, the young man who is likely to go 1-2 in the upcoming NFL draft.

Goff picked Cal as his college of choice. Browne chose USC. You know there are times now when Browne must wonder what might have happened if those decisions had been reversed.

In many ways, this USC quarterback situation is a replay of the one in 2008. Back then, a promising, young, strong-armed kid named Mark Sanchez had patiently waited behind John David Booty, even if, by many accounts, Sanchez was the more talented of the two.

But Booty had seniority, and when Sanchez finally got his chance, he was supposed to be challenged by a young hotshot much like Darnold. His name was Mitch Mustain, and Coach Pete Carroll tried to make it sound like it was open competition between the two.

It never was. Because he had waited and, more important, because he was vastly more familiar with the system, the job was Sanchez’s to lose.

Just as the job this year should be Browne’s to lose. Browne has had three years of reps with the Trojans. Darnold has had one. Max has paid his dues. Sam has not yet.

The schedule is a factor, too. If Helton were opening  his first full season on the job against Fresno State or Hawaii, it might be different. But playing Alabama in a nationally televised opener with so much at stake?

He has to go with the kid who has been around for three years. The kid he says reminds him of Peyton Manning in the way he studies tape. The kid he says is “probably smarter than all our coaches.”

He has to go with Browne.

Helton continues to say the competition at the position has been fierce. And it has. He also says the decision will be difficult. It shouldn’t be.

Somewhere around the end of the first week of fall camp, Helton should do the right thing and name Max Browne as his starting quarterback.

The best player on the team is wide receiver JuJu Smith-Schuster. Check. The most impressive position is running back with Justin Davis and Ronald Jones II. Check. The two finest defensive players on the roster, Adoree’ Jackson and Cameron Smith, didn’t participate. Check.

And oh yes, the youngest, most inexperienced and thinnest unit – maybe the most alarmingly raw unit of any in recent Trojans’ memory – is the defensive line. No Kenny Bigelow Jr., who is out for the year with a knee injury. Very little of Noah Jefferson, who is supposed to be his replacement but keeps getting hurt. And no sign of anyone else besides Rasheem Green who even seems to understand what is going on out there.

Helton isn’t saying it publicly, but a few months away from that Dallas date with Alabama,  he has to be worried about the D-line. He has to be very worried.

Easily the  highlight of an otherwise warm, lazy Saturday afternoon was the surprising appearance of Jake Olson, the blind redshirt freshman snapper who appeared in uniform for the first time outside the practice field and was allowed to show off his ability in front of an appreciative Coliseum crowd.

Led onto the Coliseum turf gently by a couple of his teammates, No. 61 stood over the football, bent down and delivered two beautiful snaps with precision sharpness. You don’t see it done any better even in the NFL.

The fans cheered and applauded loudly, his teammates patted him on the helmet and the back, and smiles could be seen breaking out all over the giant saucer.

Forget about everything else. Young Mr. Olson had just made it a Spring Game to remember.