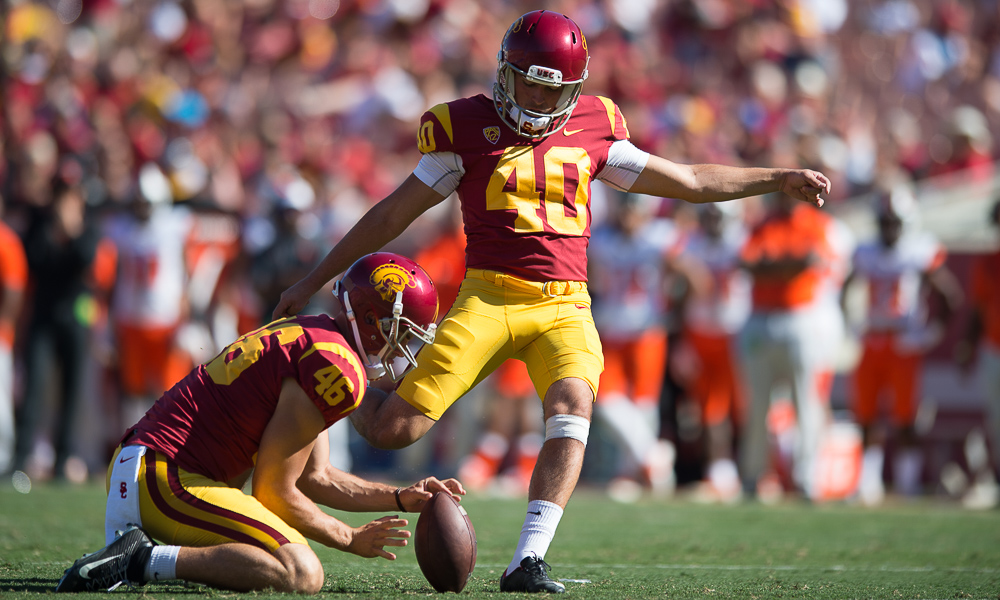 USC placekicker Chase McGrath has entered the transfer portal as the Trojans have turned to true freshman Parker Lewis at the position this season.

USC head coach Clay Helton said McGrath was dealing with some knee and hip tendonitis as a factor for why the Trojans went with Lewis as the starter to begin the season, but he also mentioned that Lewis’ performance helped steer the decision a bit as well.

The Trojans entered the season with three kickers on scholarship — an unusually high number — and McGrath will have an opportunity seek a new program where he will have two more seasons to play, thanks to the NCAA not counting this season against any student-athlete’s eligibility.

McGrath served as a solid kicker for USC after beginning his career at a walk-on. He started as a true freshman and went 12-for-17 on field goals and made all but one of his 59 extra point attempts. He has his USC hero moment that season against Texas, when he hit a 31-yard field goal with no time remaining to send the game into overtime. There, he connected on a 43-yarder to win it in double overtime.

McGrath earned a scholarship following that season and held onto the starting job as a sophomore, but tore a ligament in his knee against Texas in the third game of the 2018 season.

Last season, McGrath was named USC’s Special Teams Player of the Year after marking 14-of-17 field goal attempts and all 54 of his extra point attempts.

Lewis has handled all of the placekicking duties for USC this season, as the true freshman is 6-for-7 on field goal attempts, including a perfect 4-for-4 against Utah. He’s also forced 12 touchbacks on 19 kickoffs.

Michael Brown is the other USC kicker on scholarship. He served as USC’s placekicker in 2018 when McGrath was injured and was used on kickoffs at times last season. He also recovered his own onside kick against Iowa in last year’s Holiday Bowl.