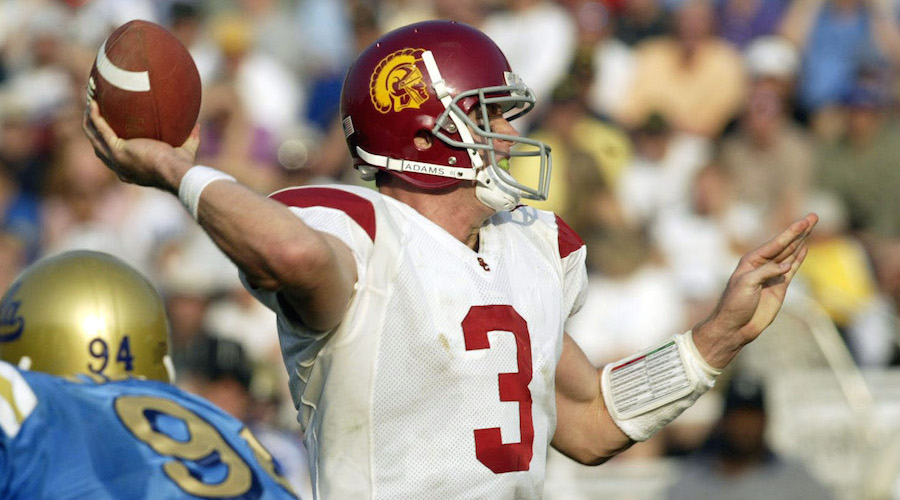 USC quarterback Carson Palmer is one of 13 new members of the College Football Hall of Fame. Palmer will become the 34th former player and 45th overall inductee with USC ties so honored.

Palmer started four seasons at quarterback for the Trojans and is one of the players most closely tied to USC’s most recent rise to prominence. During his career, which spanned from 1998 through 2002, Palmer set or tied 33 Pac-12 or USC records.

His 2002 season was spectacular, as Palmer threw for 3,942 yards and 33 touchdowns, led the Trojans to a No. 4 national ranking and walked away with the Heisman Trophy, Johnny Unitas Golden Arm Award, Sporting News Player of the Year, Pac-10 Co-Offensive Player of the Year, Consensus All-American honors and First-Team All-Pac-10. His passing yardage and touchdown numbers were all then-USC records.

He finished his USC career as the Pac-10’s all-time leader in total offense and passing yards. Palmer was USC’s first-ever quarterback to win the Heisman Trophy and that 2002 season marked USC’s first 11-win season since 1979. His No. 3 jersey has been retired by USC.

That 2002 season set the stage for back-to-back national championships in 2003 and 2004, and a magnificent seven-year run as college football’s best overall program.

He became the No. 1 overall pick of the Cincinnati Bengals, the fifth time that distinction had gone to a former Trojan. Over a 15-year NFL career, Palmer threw for 46,247 yards and 294 touchdowns. He led both the Bengals and Arizona Cardinals to the playoffs and was inducted into the Cardinals’ Ring of Honor in 2019.