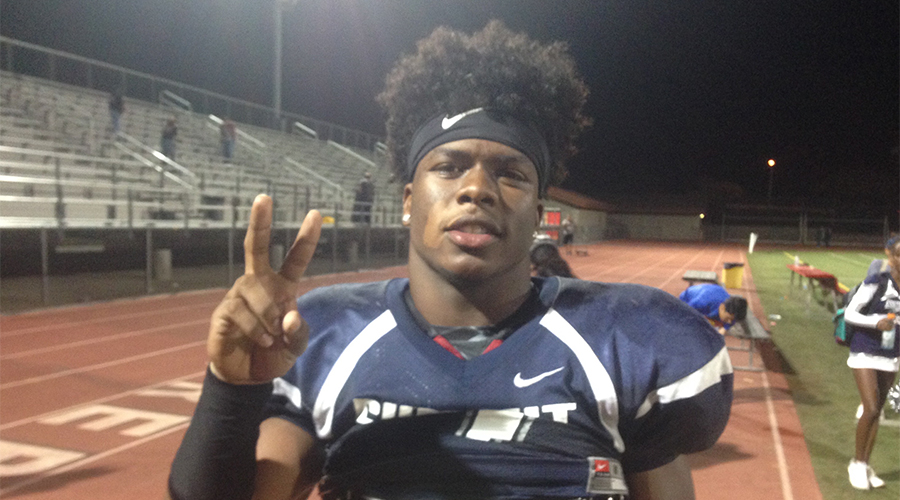 In a battle of two early-season unbeatens, USC commit Stephen Carr put on a one-man show this past Thursday night as the heralded running back led Fontana (Calif.) Summit to a 36-25 victory over San Bernardino (Calif.) San Gorgonio.

As he’s done so often in his career for the Skyhawks, the Class of 2017 star was a dominant force on the offensive side of the ball, carrying the ball 29 times for 131 yards and four touchdowns, while also making two receptions for 74 yards and one more touchdown. He also reached the end zone on a two-point conversion run.

Making Carr’s performance all the more impressive was the fact that not only did he also make his presence felt on special teams, but in a new twist for this season, on defense as well, as he spent significant time at both cornerback and linebacker for Summit.

“It’s my turn to step up this year as a senior, and I’m trying to put the team on my back,” said Carr, who stands 6-foot, 205 pounds. “I love to rise to the occasion. I always love new challenges. I think it makes me a better person.”

On the recruiting front, Carr has been a Trojans commit since March of his sophomore year, but he opened the process up a bit last January, and as he explained, that is still where things stand today.

“I’m still committed to SC, but I am keeping my options open,” said Carr, who took unofficial visits to both Miami (Fla.) and Michigan in the spring. “There’s still a long time until signing day.”

That being said, Carr admits that there are still plenty of factors that continue to keep him in the fold at USC right now – namely the Trojans coaches.

“It’s the coaching staff, and the way that they connect with me,” Carr said. “There’s also a high comfort level there with it being down the street – 30 minutes away from my family. It’s great. Plus, it’s just the love of the fans.”

Carr has continued to maintain weekly contact with the coaches at USC, and the staff has made sure to let him know that he is still a huge priority for them –particularly Trojans running backs coach Tommie Robinson.

“Me and Coach Robinson, we’ve built up a good relationship,” Carr said. “We talk all the time over the phone.”

Unable to make it up to USC since the spring, Carr finally made a return-trip to campus just over two weeks ago, and the visit left a positive impression.

“It was great,” Carr said. “I really just touched base with them again. I hadn’t seen the coaches face-to-face for a long time. I spent time with all of the coaches, I checked out all the new stuff on campus that they’ve put in, and I heard about the new stuff that they’re going to put in.”

The Trojans suffered a crushing 52-6 loss to Alabama in their season-opener, only to respond with a 45-7 victory over Utah State this past weekend in a game that Carr attended. Spoken to on Friday night – one day prior to USC’s victory – Carr said that their performance against the Crimson Tide didn’t have a significant impact on him, and he expressed confidence in the fact that the Trojans would rebound with a stronger showing against the Aggies – which they did.

In addition to the Wolverines and Hurricanes, Carr also continues to be pursued heavily by the likes of Alabama, LSU, Notre Dame, Texas A&M and a host of other top-flight programs from coast-to-coast, and he foresees himself taking all five of his official visits.

“I will take all of my visits, but don’t know where to yet,” Carr said. “I’m still talking to my mom about it.”

There is one school, however, that will definitely be getting one of Carr’s officials – USC.

Reiterating what he’s stated previously, Carr said that he still plans to make his final decision on Signing Day.