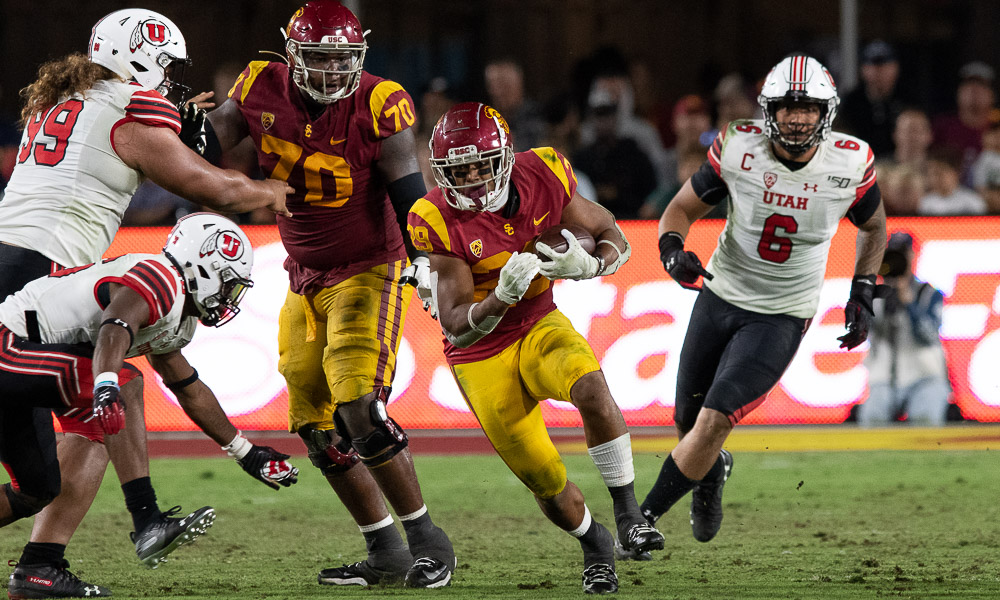 USC doesn’t see many home games played in the rain, but that’s what the forecast calls for on Saturday morning and the Trojans are preparing to face the potentially wet conditions. Head coach Clay Helton said USC began using wet footballs on Wednesday to prepare themselves for anything that happens on Saturday.

What will be interesting to watch on Saturday however, is whether the weather forces the Trojans to turn the focus of the offense from the air to the ground. And if so, what kind of impact might that have on USC’s production?

Head coach Clay Helton said USC will have its full stable of running backs, as Vavae Malepeai (hamstring) and Markese Stepp (foot, toe) are cleared and ready to go on Saturday, joining Stephen Carr and Kenan Christon, who carried the load during much of fall camp.

USC coaches have talked about getting the running backs involved in a variety of ways — lining up in two-back sets, sending them out of the backfield as pass catches or even setting up as wide receivers — and USC offensive coordinator Graham Harrell said having all four available is a big deal for the offense.

“The cool thing about the backs that we have is if we have all four of those guys healthy, you have four different players,” Harrell said. “Everyone has a little big different skill set and because of that, it makes it really hard to prepare for those guys and it makes us more versatile.”

While running back production is directly attributed to that group, it’s a product of good offensive line play. That’s where the biggest question exists for this USC offense and Harrell said the group up front is eager to provide an answer on Saturday.

“As an entire unit, they all kind of have a chip on their shoulder for whatever reason,” Harrell said.

USC coaches have rotated linemen this fall and made sure they got a chance to see all of them, but Harrell said they also tried to keep them in pairs, so that they had an opportunity to spend extended time playing next to the same person and building the chemistry that has to exist up front. Harrell said that’s where he’s seen the most growth and development from the veteran group.

“I think from the beginning of camp to now, the biggest improvement is they’re a lot more used to playing next to each other,” Harrell said. “They’ve gotten more and more on the same page with each other.”

Harrell said the first step is being able for one guy to recognize what’s coming from the defense, but the next is for the whole group to see it, communicate it and react to it as a unit.

“Now you have something pretty good happening,” he said. “So that’s kind of what I’ve seen, where the improvement’s come. Hopefully that continues to happen.”

Harrell said they’ve made sure the defense has thrown a wide variety of looks at the offense because they don’t know exactly what they’ll see from the Arizona State defense, so they want to make sure the line is prepared for anything.

Keeping quarterback Kedon Slovis upright is going to be a major key this season, but Harrell emphasized how important the running game is to this offense. That’s something that might be even more important in the rain on Saturday.

“Obviously a lot of people talk about our receivers and quarterbacks and the talent we have at those spots — and we do have a lot of talent there,” Harrell said. “But in this offense, if you can run the football, that’s when you win the most games and you can look at it anytime anyone that runs anything like this offense. When the run game’s been established, when they’ve been able to run the ball effectively, you get much better seasons.”

Malepeai led the Trojans with just 503 rushing yards last season, as USC ran for just 1,537 yards last year. It’s probably unrealistic to expect USC to hit that team total number in a shortened season, but a better per-game number should absolutely be something the Trojans are capable of this year.

“Being able to do that is going to be really important for us this season,” Harrell said of establishing a ground game. “I feel great about who we have up front to do that. When all four of the running backs are healthy, we’re bringing a different look at them every time and I think it’s going to help the run game. When we run the ball at a high level, it’s going to make this offense really hard to stop and that’s what we’re going to try to do.”