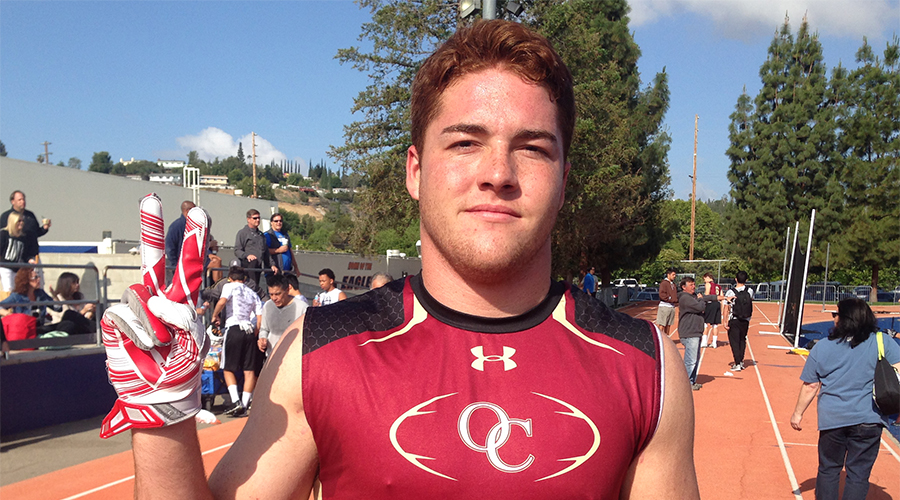 Class of 2018 outside linebacker prospect and USC commit Bo Calvert was back in action with his Westlake Village (Calif.) Oaks Christian team this past Saturday as the Lions took part in one of the first big local high school 7-on-7 competitions of the current offseason, which in addition to host West Hills Chaminade, also featured Calabasas and San Juan Capistrano JSerra.

Coming off an 11-1 2015 campaign, Oaks Christian looked extremely solid on Saturday, with Calvert standing out on the defensive side of the ball. An extremely physical athlete with 6-foot-4, 210-pound size, it’s easy to see why USC head coach Clay Helton and staff decided to extend an offer his way in early April, which Calvert wasted no time in jumping on.

“I grew up a huge Trojan fan,” said Calvert, who also held offers from BYU and Virginia at the time of his commitment. “I went to the games when I was younger, and I actually have pictures of me in all Trojan gear. And just being able to run out on that field one day was a huge dream of mine.”

Another crucial factor that played a role in Calvert’s decision is his relationship with Oaks Christian quarterback and fellow Class of 2018 star Matt Corral, who gave a verbal pledge to USC in early February.

“A huge part of it was Matt Corral,” Calvert said. “We played middle school football together, and it was just a dream of ours to continue that dream of playing together in middle school, in high school, and then moving on and playing in college.”

Also close with Oaks Christian Alum Michael Pittman – who enrolled at USC this past January – Calvert made it up to the Trojans campus with Corral last month for the spring game, and the experience left a lasting impression.

“Matt and I showed up early in the morning and we went to their pre-practice meeting, and that was pretty crazy,” Calvert said. “The defense that they’re running is extremely complex over there. It was a lot to take in, and there were huge guys over there. And just going out there, the speed of the game is a lot quicker, guys are making calls way faster and switching out of coverages, and just being able to see that and to recognize that’s where I’m going to be in a couple years is pretty amazing.”

And Calvert has already started to develop a solid bond with the USC coaching staff as well, particularly with the head coach himself, Helton.

“I talk to him every now and again,” Calvert said. “Matt and I will get on group calls or we’ll call him individually. He’s a great guy all-around. We don’t just talk about football. We talk about life, and we talk about our family and everything.”

An extremely versatile defensive performer for Oaks Christian, Calvert took reps almost exclusively at safety on Saturday, but depending on the opponent, he’ll also line up at linebacker as well as at defensive end on a typical Friday night in the fall.

As far as his future at USC, the Trojans coaches have told him that they envision him staying closer to the line.

“We briefly talked about that on the phone awhile ago,” Calvert said. “Depending on how much weight I gain, I’ll either be a pass coverage linebacker, or if I can bulk up, I’ll do a little more of a d-end rush position – a little bit like a Porter Gustin type of thing.”

With the intriguing skill-set that he brings to the table, it’s no wonder that top-flight programs like Notre Dame and Texas Tech continue to pursue Calvert, but at least for now, he’s all USC. In a sign of that, he and Corral have already started to do their part in recruiting some other Class of 2018 prospects to USC.

“F.B.U. is out here, and all of the all-star teams, and playing with those guys, you create a real relationship with them,” Calvert said. “The same thing with Matt and I continuing our middle school dream, we’re just trying to do the same thing with those guys out here. We actually talked to some guys out here today in-between games, just kind of bringing it up to them casually. And of course we get on Twitter or group messages on our phones, and if we see them out we’ll just kind of bring it up to them. We’re trying to bring in as many 2018 guys as we can.”

Aside from a busy practice and 7-on-7 schedule with Oaks Christian, Calvert has no set plans for the rest of the offseason at this time. He did note, however, that more than a few return trips to USC are likely on the horizon, including one, potentially, for the Rising Stars Camp in June.