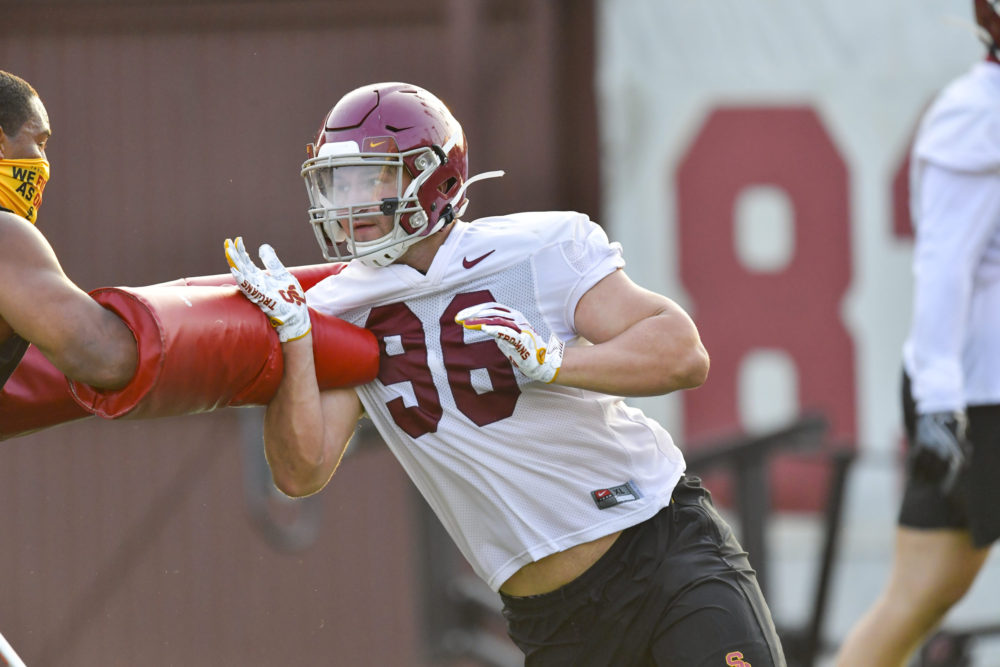 USC defensive end Caleb Tremblay announced Friday that he will his name onto the transfer portal and look to play his final season of eligibility elsewhere.

His departure would be another blow to a USC defensive line that lost defensive tackle Brandon Pili for the season due to a torn achilles tendon and is currently without transfer defensive tackle Ishmael Sopsher and defensive end Nick Figueroa. Tremblay had been in and out of practices this spring, but was one of the players initially singled out and praised by defensive line coach Vic So’oto last spring when he first took over.

Tremblay came to USC in the spring of 2018 from American River College in Sacramento and played in three games that season before being sidelined with a knee injury. He had 16 tackles in 2019 and three tackles last season while missing two games.

Tremblay would have provided valuable depth at defensive end this season, though the expectation is that Figueroa and Tuli Tuipulotu will man the defensive end spots as starters, with incoming freshman Korey Foreman a possibility to play there as well.

The Trojans have seen some improved play from Stanley Ta’ufo’ou and De’jon Benton at defensive end this spring, and Jacob Lichtenstein appears to have made a significant leap and could be a real contributor this year. USC will also welcome in freshman defensive end Colin Mobley with the rest of the 2021 recruiting class.

Tremblay joins linebacker Palaie Gaoteote as Trojans with their names listed on the transfer portal. There has been fairly significant turnover up front via the portal. USC lost defensive end Connor Murphy to UNLV and outside linebacker Abdul-Malik McClain to Jackson State. USC has also seen kicker Chase McGrath go to Tennessee and running back Markese Stepp to Nebraska.