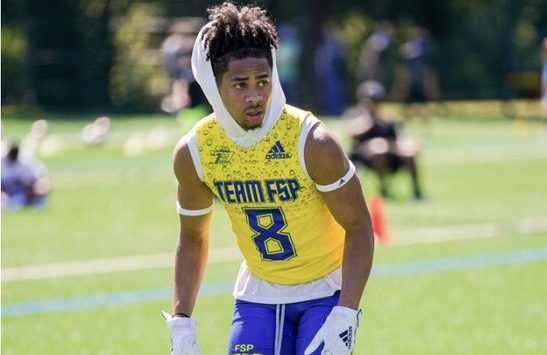 Class of 2023 cornerback Caleb Presley (Sammamish, Wash./Eastside Catholic) knew something was coming with his recruitment last week, but he wasn’t sure exactly what.

Presley trains with Ford Sports Performance (FSP)–a training company and 7-on-7 club in Washington that has become a go-to spot for the top prospects in that area. Recently, Presley said FSP CEO Tracy Ford told him there were some eyes on him when it came to recruiting, but Presley didn’t know what was going on.

A short time later, Presley was called into Ford’s office to jump on a phone call. On the other line was USC cornerbacks coach Donte Williams, who extended a scholarship offer.

It was the first Pac-12 offer for the 6-foot, 170-pound Presley, who has others from Florida Atlantic, Nevada and UNLV. There’s still a long ways to go until Presley can sign with a school, but USC hasn’t been shy about being the first major or Pac-12 offer to prospects in Washington. It paid off in this class, as USC was the first offer for four-star athlete Julien Simon (Tacoma, Wash./Lincoln), who is committed to the Trojans.

“I’m most definitely grateful that coach Williams was the first one from the Pac-12 to kick off this journey,” Presley said. “With him kicking it off and knowing more looks are going to come, it’s a big deal for me and my family knowing it was my first Pac-12 offer.”

Williams has a reputation that precedes him when it comes to recruiting. He’s spent the past two years at Oregon, so Presley has some familiarity with him from his time in the Pacific Northwest. While USC certainly didn’t like watching it happen, Williams helped turn the Oregon secondary into one of the best in the nation and now three Ducks from that group have declared early for the 2021 NFL Draft. The hope is that the Trojans can finally benefit from Oregon’s success there, as those are three more players Williams can point to when talking about his coaching successes.

Presley said Williams’ ability to send players to the NFL–he mentioned that Williams has helped send 19 to the league–is a big selling point. But Williams’ demeanor on the call–Presley’s first interaction with anybody from USC–is what stood out.

“He’s 100% an authentic dude,” Presley said of Williams, adding that the coach broke down a little bit of what he likes about him as a player. “We run a Cover 2, but USC runs more man-on-man, putting us on an island. I think that’s where I thrive. I can handle my man on an island. He was telling me what he was looking at on film and how that can transfer to college.”

Presley broke down his own game a bit, offering a look at some of the strengths he brings to the field.

“I see my strengths as a corner that’s able to tackle,” Presley said. “That’s something people struggle with at the next level–not making plays on the ball and not wanting to hit. I’m willing to stick it to them in any way possible. I think tackling is something that separates my game, but I’m looking forward to making plays on the ball and getting interceptions. I don’t want one part of my game to be stronger than others, but I do what to find that niche that sets me apart.”

USC is actually exploring two important pipelines with its recruitment of Presley. Not only is FSP going to continue pumping out talent–Simon and recent cornerback commit Philip Riley are FSP prospects, and a number of USC targets in the 2020 class were as well–but Presley also attends an Eastside Catholic program that pumped out USC targets in tight end DJ Rogers, running back Sam Adams, wide receiver Gee Scott Jr. and cornerback Ayden Hector in the 2020 class, and boasts No. 2 overall prospect, defensive end J.T. Tuimoloau, in the 2021 class.

Presley said he and Simon go back several years, to when Presley was in 7th grade. And he and Riley have spoken as well. They’ll certainly serve as Williams’ assistants when it comes to recruiting Presley to USC going forward.

Because of the talent that has surrounded him his short high school career, Presley feels ahead of the game compared to other recruits in the 2023 class.

“Being able to sit under some future stars, some big D1 guys, to sit with Ayden Hector or go one-on-one with Gee Scott Jr., going against top talent every day in practice, that’s what sets me apart as an athlete,” Presley said.

This won’t be the last big offer for Presley, who has generated interest from Oregon, Utah, Washington, Wisconsin and other programs to this point. He’s taken an unofficial visit to Oregon and hopes to visit other schools once the dead period is lifted on Jan. 1. Washington under new head coach Jimmy Lake is a program to watch when it comes to the top in-state prospects. Sa’vell Smalls was an absolutely massive recruiting win for the Huskies in the 2020 class, though that came with former head coach Chris Petersen at the helm. In this 2021 class, the Huskies hold commitments from four of the top seven Washington prospects, but USC was able to get in there for Simon and the top two in the state–five-stars Tuimoloau and wide receiver Emeka Egbuka–are trending toward Ohio State.

For now, Presley is comfortable sitting back and letting the recruiting process continue to come to him.

“With the position I play being DB and knowing my goal is to get to the NFL, whatever school will give me the best opportunity to get there,” Presley said of one of the biggest factors that will be in play when it comes time to make a decision. “I’m not in a rush to make a decision though. I want to sit down and really gather my thoughts.”