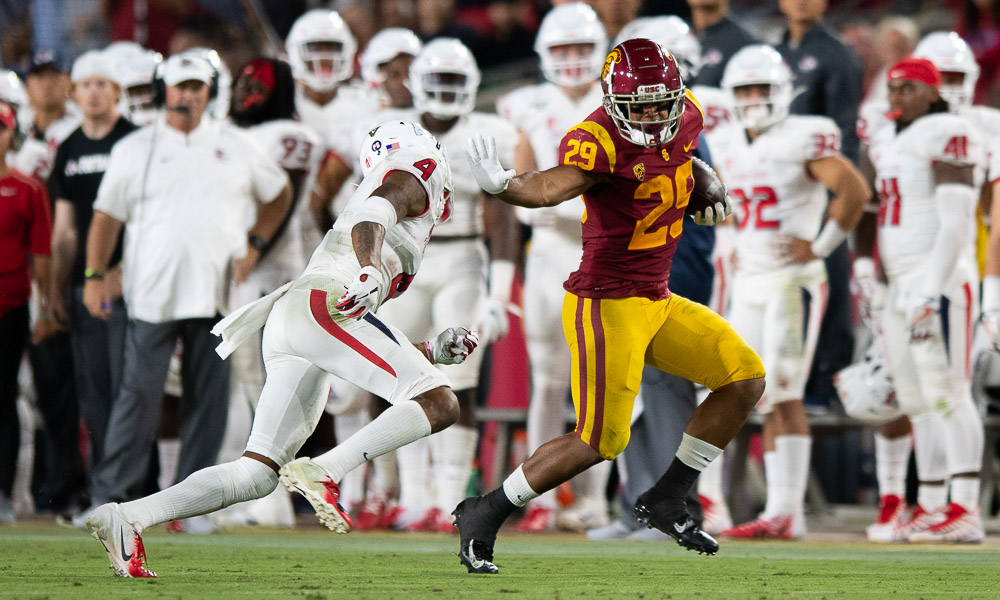 LSU in 2019 threw the ball 52.5% of the time compared to USC’s 56.7% in 2019. USC’s 2019 rushing stats are compared to LSU’s 2019 National Championship winning rushing stats because these offenses primarily focused on throwing the ball.

USC in 2017 threw the ball on only 47.4% of its offensive plays. However, USC’s 2019 rushing stats are compared to USC’s Pac-12 winning 2017 rushing stats, because they are both examples of Clay Helton coached teams against Pac-12 defenses.

USC ’17 and LSU ’19 are also examples of winning teams, a destination USC’s 2020 team (if the season happens) would like to reach. So, this is a study in what it would take, rushing-wise, for USC 2020 to reach that destination.

It must be kept in mind that the rushing stats only present half the story. A poor rushing attack can in theory be overcome by a truly great passing attack. However, a good, efficient rushing attack in a pass-dominant offense can complement the passing game, keep and defense honest and most importantly stop the opposing defense from keying in on Kedon Slovis, an imperative, given USC’s inability to keep its starting quarterbacks from getting injured in games last year.

There should be no reason why a pass-dominant offense can’t have an efficient rushing attack when it chooses to run.

a) USC averaged fewer rush attempts per game compared to LSU ’19 and USC ’17.

f) These stats show that, while it is possible to win championships with a pass heavy attack, like USC will likely employ in 2020, a repeat of USC’s 2019 rushing performance in 2020 will not be efficient or explosive enough to complement the passing game.

d) Although the rush attempts in Q2 and Q3 for LSU ’19 were almost the same, LSU rushed for 35% more yards in Q3 compared to Q2. This could be a possible indication of half-time changes by the coaching staff.

a) USC ’19 attempted 35% fewer rushes on first down compared to USC ’17, a clear demonstration of a change in offensive philosophy (Fig. 6). The difference, however, is less profound on second and third downs.

Rushing Stats by Third Down Distance to First Down:

d) USC ’19 rushing converted third downs on 24 of 36 attempts when the distance to go was between 1-3 yards, a conversion percentage of 66%. Coincidentally, USC ’17 and LSU ’19 converted on third downs with the same efficiency.

e) USC also averages 5.2 ypa between its own 1-20 yard line. These are the two regions on the field where USC ’19 rushing attack performs the best.

c) USC ’19 rush attempts did not vary significantly based on the game situation, except when they were losing by 15+ points, where they had the fewest number of rush attempts with 22.

d) USC ’19s three best ypa numbers were when they were winning by 15+ points – a sign they were the dominant team, and losing by 8-14 points and 15+ points – a likely sign the opposition were more concerned about stopping the big pass play than the rush game (Fig. 13).

* All stats taken from cfbstats.com