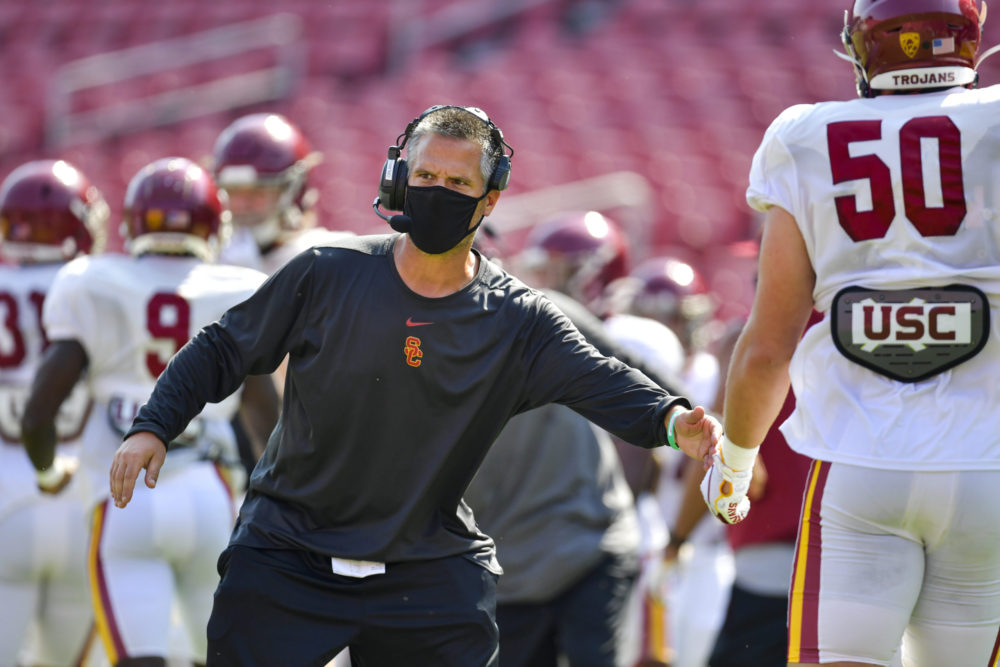 An attempt is made to study Todd Orlando’s first year defenses this decade (2011-2020) and to predict how USC’s 2020 defense will perform based on trends seen in the study. Of course, given all the weirdness of 2020, expect all predictions to fall flat on their faces.

In his first year at FIU, Todd Orlando improved the ranking of the total defense from 61st to 31st and scoring defense from 65th to 14th. The Panthers’ 2010 defense, which gave up 27.3 points per game, only gave up 19.5 ppg in Orlando’s first year as DC. Neither the 2010 nor the 2011 team played any non-FBS competition.

In his second job this decade, Orlando again replaced a DC who was not fired from his job but left presumably for greener pastures. Orlando replaced Dave Aranda, who followed Gary Anderson to Wisconsin.

Dave Aranda left behind a defense that was nationally ranked 14th in total defense, 7th in scoring defense, 13th in third down defense and 1st in the red zone. The Aggies played two AP ranked teams in No. 22 Wisconsin and No. 19 Louisiana Tech in 2012.

After Tom Herman was hired to take over as the head coach of the Cougars in 2015, he hired Todd Orlando to be his defensive coordinator. Todd Orlando replaced David Gibbs, who guided the Cougars to rank 20th in total defense and 15th in scoring defense. In his first year at Houston, Orlando’s defense ranked 53rd in total defense, giving up 40 ypg more than in 2014. In scoring defense, Houston ranked 20th in 2015 and gave up the same number of points per game as in 2014 – 20.7.

Orlando’s passing defense in 2015, howeve,r performed poorly compared to 2014. They gave up almost 75 ypg more than in 2014 at 7.7 ypa compared to 6.3 in 2014. The Cougars’ 2015 pass defense was ranked 116th in the nation. In Gibbs’ final year at Houston, they only played one AP ranked opponent – No. 25 BYU. In contrast, in 2015, the Cougars played four AP ranked teams at the time of playing them and nine of the Cougars’ opponents ended up ranked in the final AP ranking.

There was no significant improvement in Texas’ passing defense numbers in 2017, compared to 2016 and ranked 109th in the country. However, Texas had the 3rd best third down defense in the nation in 2017. Texas only allowed 27.14% conversion rate on third downs.

Texas played USC in 2017 and lost 24-27 in double OT. Readers may remember USC having trouble trying to run the ball against the Longhorns. Ronald Jones averaged 2.6 ypa and Stephen Carr 3.1 ypa. Texas played five ranked teams in 2017 and lost four of those five games. Texas’ ranked opponents averaged 21.4 ppg against Orlando’s defense. Texas never gave up more than 29 points against the ranked teams.

If trends seen during Orlando’s four previous coaching stops this decade were to continue, this is what the USC defense might look like.

Expect an improvement in USC’s scoring defense. The worst scoring Todd Orlando’s first-year defense this decade was at Texas, where the Longhorns gave up 21.2 ppg and ranked 29th in the nation. USC gave up 29.4 ppg in 2019 and was ranked 78th.

Expect a significant improvement in USC’s rush defense. The most number of average rush yards per game Orlando’s defense gave up in his first year was at FIU, where the opponents were able to run for 118 ypg. Since then his first-year defenses have given up 106, 108 and 106 ypg. USC gave up 162 ypg over the course of the 2019 season. Also expect opponents’ rush yards per attempt to fall significantly. USC gave up 4.48 ypa in 2019. The worst Orlando’s defenses did was 3.35 ypa at FIU.

Expect USC’s pass defense to continue to be mediocre or slightly worsen. USC ranked 92nd in pass defense in 2019 and gave up 246 ypg. In his first year at Houston and first year at Texas, Orlando’s defenses gave up 274 and 258 ypg respectively. In all his four coaching stops this decade, Orlando’s first year defenses have allowed more average pass yards per game and more pass yards per attempt than his predecessor’s final year’s defense.

USC’s third down defense will likely be middling but there could be cause for optimism. At FIU, Utah State and Houston, there was no significant change to the third down conversion percentage in Orlando’s first year compared to the year prior. If this were to continue, USC would find itself at the bottom half of the Nation’s third down defenses. USC was ranked 79th in 2019 and allowed a 40% conversion rate. One reason for optimism for Trojan fans though, could be how Orlando improved Texas’ 2016 third down conversion rate of 38% to 27% in 2017, enough to earn a National ranking of 3 in this category.

There is no clear trend regarding red zone defense. Orlando’s defenses have ranked as high as 6 (Utah State) and as low at 120 (Houston) in this category in his first year. USC ranked 90th in 2019.