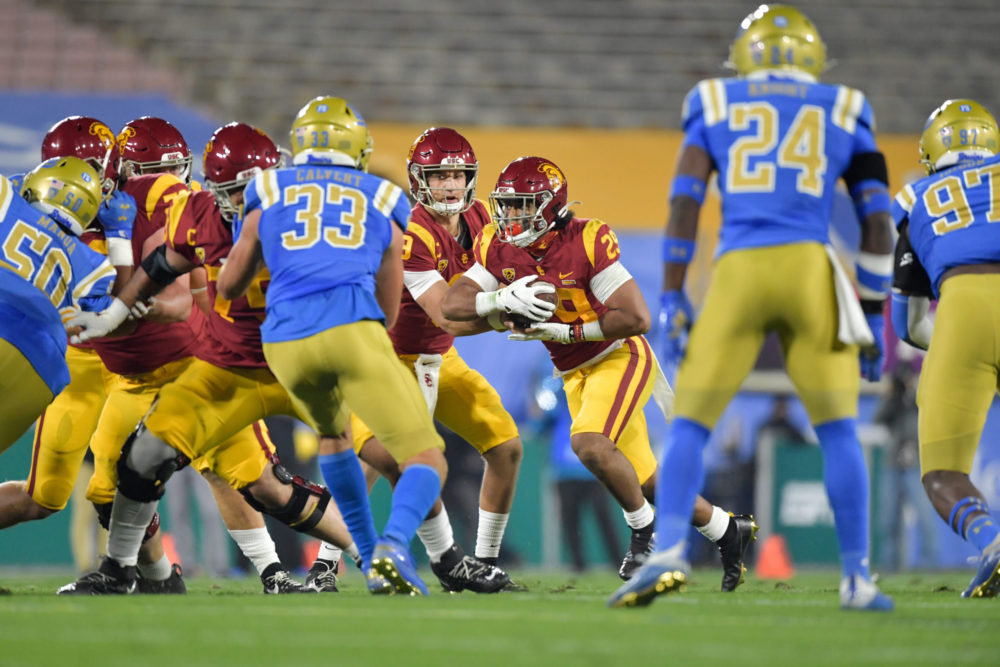 At the beginning of the 2020 season, USC head coach Clay Helton spoke about how important the running game would be for the Trojans. He saw the 166 rushing yards per game put up by LSU on its way to a national championship last season as the benchmark needed — paired with an elite passing offense — to finish as one of the nation’s top four teams and be in the discussion for a national title.

“Last year we’re sitting in the 120’s, averaging 120 [rushing yards] per game and we really wanted to be able to hit a mark of 165, 170 in each and every game,” Helton said. “We think that’s the difference in us winning the championship.”

An investigation into Helton’s claim is made here by studying the offensive production of all playoff teams since the playoffs were instituted.

In the graphs below, for comparison, USC’s numbers in 2019 and 2020 (Graham Harrell era) are shown in red dots.

Florida State in 2014 were the defending National Champions and its passing offense was ranked 14th in the nation (Fig. 2) compensating for the 98th ranked rushing offense (Fig. 3). However, a deeper look at the passing numbers showed that Florida State threw for 26 touchdowns and 20 interceptions. Florida State was a good team but not a great team, evidenced by them having the fewest points per game differential (+8.1) amongst all playoff teams (tied with Michigan State 2015) (Fig. 2).

Fig. 1 shows that since 2016, no playoff team has rushed for fewer than 160 yards per game. The 160 yards per game mark is usually good enough for a rush ranking of approximately 60th in the nation, which is average. Since 2014, there have been five playoff teams that have been ranked 60th or lower in rushing (Table 1). Except for Michigan State, an outlier, all of them have had a top-14 passing offense. For comparison, Graham Harrell’s passing offense numbers are ‘elite’ and were ranked 6th and 12th in the Nation (Fig. 2) in 2019 and 2020 respectively.

The other problem is the number of empty passing yards. Table 2 shows the passing stats of the 8 playoff teams that have been ranked in the top 10 in passing offense and USC.

Eilte (Top 10) passing playoff teams have thrown for at least 43 touchdowns (Fig. 5). USC in 2019 threw for only 35 touchdoens, even though it was ranked sixth in passing offense. USC threw for 17 touchdowns in six games in 2020, which would extrapolate to 34 touchdowns over a complete 12-game season. The ‘elite’ yards per game are not being translated into an elite number of passing touchdowns.

The numbers here confirm what viewers of USC football have long seen.

USC has an unbalanced offense, with little to no running game, even against 3-man fronts. This allows the opposing team to focus on defending the pass. USC, by virtue of throwing approximately 60% of the time, gains sufficient empty yards, but the passing yards don’t translate to points like they do for the playoff offenses.

Given USC is not throwing for touchdowns like an elite passing team, statistically, USC would need to run for approximately 190 yds, while keeping the current level of passing touchdown production to have a playoff-worthy offense. This means doubling its rushing performance.

Ultimately, Clay Helton’s claim is correct. Getting 160 yards rushing per game combined with an elite passing offense is a playoff-worthy offense. The issue right now is that USC has neither.