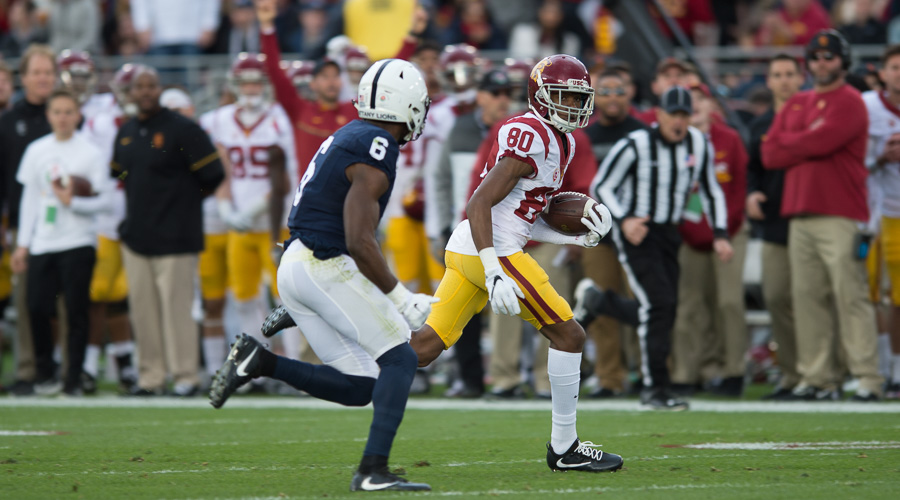 As the Trojans prepare for the start of 2017 spring drills next week one of the things we will see is a shifting of the guard at the top of the receiver depth chart. For three years now we’ve seen JuJu Smith-Schuster and Darreus Rogers in place on the outside but now both of them are gone, and it’s unclear how much Steven Mitchell (11 career starts) will be available in the slot.

That means junior slot receiver Deontay Burnett is the established veteran after stepping in when Mitchell went down last fall and eventually tying for second on the team in catches with 56, for 622 yards and 7 touchdowns. Burnett has steadily increased his role ever since arriving as a blueshirt in the fall of 2015 as a 158-pound freshman from Serra who was said to have savvy instincts for the position, a projection that has certainly proven to be true.

Burnett had 10 catches for 161 yards (16 yards per catch) as a true freshman, when by all accounts he should have been redshirting to add bulk. His totals increased in his sophomore year with added playing time due to the Mitchell injury and the emergence of Sam Darnold at quarterback, with whom Burnett has obvious on-field chemistry.

Of course, any discussion of Burnett moving forward will come back to his play in the Rose Bowl, when he caught 13 passes from Darnold, for 164 yards and three touchdowns. It was a virtuoso performance that included the game-tying catch with under two minutes to play on a route where he broke it off and Darnold read the adjustment before throwing a beautiful ball for the score.

One person who has a unique appreciation for the role that Burnett plays is the man who serves as the analyst for the USC radio broadcasts, John Jackson, who was once the Trojans career receptions leader by working the middle of the field much in a similar fashion to Burnett.

Jackson discussed how Burnett was able to take advantage of the Nittany Lions defense to come away with one of the best statistical receiving days in Rose Bowl history, and also what it’s like as a receiver (especially an undersized one) to go against the safeties patrolling the secondary.

“The performance from Deontay was great, don’t get me wrong, but the scheme from Penn State paved the way for that big day. Their defensive front was so good that they played the 2-high safety look all day. They sort of bait you to try and make the tough throw over the linebacker and in front of the safeties, but with the cover 2 defense that’s where the ball is supposed to go.

Deontay has a great feel for working that area of the field, and I think a lot of that comes back to him playing quarterback as a sophomore in high school, he understands the windows on the field that he needs to get to. That’s where Deontay consistently exposed the Penn State defense. The play is there but not only do you have to identify the correct read, it also takes a special quarterback to make the throw and a receiver to risk making the catch.

On the last TD to Deontay, Sam got it up over the linebacker and then it came down in front of the safeties, it couldn’t have landed any better. Not to mention the velocity from Sam, he didn’t lob that in there, he zipped it. And the thing with Deontay, he had to turn back to look for the ball, so by the time he caught it, the last time he had seen the safeties was about 12 yards ago. Think about it, every time you go down the middle and turn your head back, you are guessing on when you’re gonna get hit. And when you’re 170 pounds like Deontay is (gives a knowing laugh) you’ve got to block a lot out in your mind. On that final touchdown, Sam lets go of the ball and you’ve got to catch it. That’s it. The Rose Bowl is on the line. You know you’ve got two safeties coming, yet you’ve got to convince your mind “just catch this ball” without worrying about what is waiting. That’s not always an easy thing to do.

You can work on a lot of things in practice to get better, from route running to catching the ball, but one thing you never work on in practice in making a catch and getting hit. There’s never a drill where you tell the DB to line up 20 yards down there and take your best shot. Does it happen from time to time at practice? Sure. But it’s not something you do in a drill to put your receiver in that position. There are no “go down the middle and get hit” drills.

When I was playing we had a coach who would hit us with bags after we made a catch but it’s not the same thing. I’m not in fear of the bag. The bag isn’t Tim McDonald ready to lay me out. So since there isn’t any real way to simulate that in practice, your practice ends up being in a game. The only way to find out if you have the mental ability is to do it in a game. And Deontay did.”