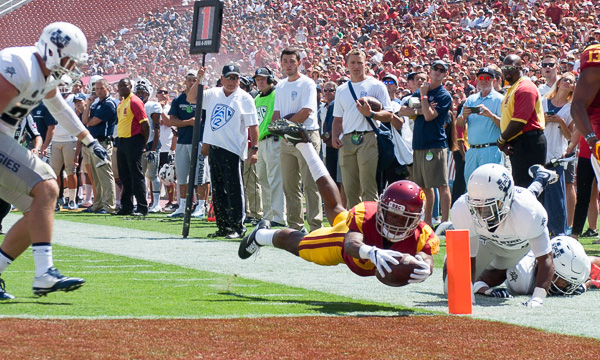 While there was plenty to celebrate for the Trojans following the team’s 48-14 victory over Arizona last Saturday, the injury suffered by starting slot receiver Steven Mitchell Jr. put a definite damper on the mood of things in Tucson.

Eventually determined to be a torn ACL, it dealt the Trojans a significant blow not only because of Mitchell’s importance as the offense’s No. 3 pass-catcher, but also due to the fact that he’s a veteran leader who is well respected by his teammates.

One of those impacted by the loss on an emotional level was sophomore wide out Deontay Burnett, who is now being called upon to fill the void created by his loss.

Of course, Burnett appears to be more than ready for the challenge. The 6-foot, 170-pound wide out has already seen a dramatic uptick in his playing time this season, and he’s made the most of it, hauling in 23 passes for 229 yards and two touchdowns.

Overlooked at times, the talented playmaker has made a habit of beating the odds and coming through when called upon – not just at USC, but back on the high school level at Southern California powerhouse Gardena (Calif.) Serra as well.

It was there that Burnett, as a somewhat undersized, but uniquely athletic receiver caught the eye of USC offensive coordinator and wide receivers coach Tee Martin at practice one day. His fierce one-on-one competitions with Adoree’ Jackson – a teammate at Serra as well as at USC – were one reason why. Perhaps making an even bigger impression, however, was the way that he performed after practice in some more unconventional battles.

“After practice they would do all of this flipping, catching the ball with one hand, and you know, who could throw the ball the farthest – all of this freaky stuff that they would do,” Martin said. “And Adoree’, you know the kind of stuff he can do, and Deontay was right there. I was like ‘who is this kid?’ It got my attention and I started recruiting him from that point on.”

The Trojans eventually gave Burnett an opportunity to come to USC, but with their recruiting class for 2015 filled up, it would have to be as a blueshirt. That would mean that he would have to agree to come in essentially as a walk-on until the second day of fall camp, at which point in time he would be put on scholarship – all so that he could count towards the Class of 2016.

Despite holding traditional offers from the likes of Arizona State, Michigan and Washington State – the program he was committed to as Signing Day approached – Burnett decided to flip to USC, the school that he had dreamed of playing for since childhood, and to use the blueshirt label as a source of motivation.

“I’ve always had a chip on my shoulder as a football player, and every opportunity that I get, I just try to make the best of my opportunities,” Burnett said. “So, when I got the scholarship, I decided to come here even with the tough situation I was going to have, and to just compete.”

Burnett’s mindset has most certainly served him well in his time at USC. Originally expected to redshirt as a freshman, he impressed the Trojans coaches with his work ethic, athleticism, and pass-catching skills in practice – so much so, in fact, that he wound up landing in the rotation at the slot receiver spot in that initial season on campus, making 10 receptions on the year.

“He’s one of the guys who, as a receiver, you don’t see drop the ball very often,” Helton said. “He has tremendous ball skills. You talk catch radius, he’s one of those guys who has unbelievable catch radius – high, low, wherever it is, if he touches it, he catches it.”

With the numbers that Burnett has put up, and the progress that he’s made on a consistent basis, he appears ready to shine in his expanded role, although he certainly wishes it was happening under different circumstances.

“This wasn’t the way that I wanted to take on a larger role. Steven was a key player in our offense, and it just hurts our team,” Burnett said. “But every play that I’m out there, I’m going to play for him.”

Now holding greater responsibility on his shoulders, Burnett is focused on the task at hand, but that doesn’t mean that he’s going to do anything different in terms of preparation.

After all, it seems as though the formula that he’s used up to this point has worked out pretty well.