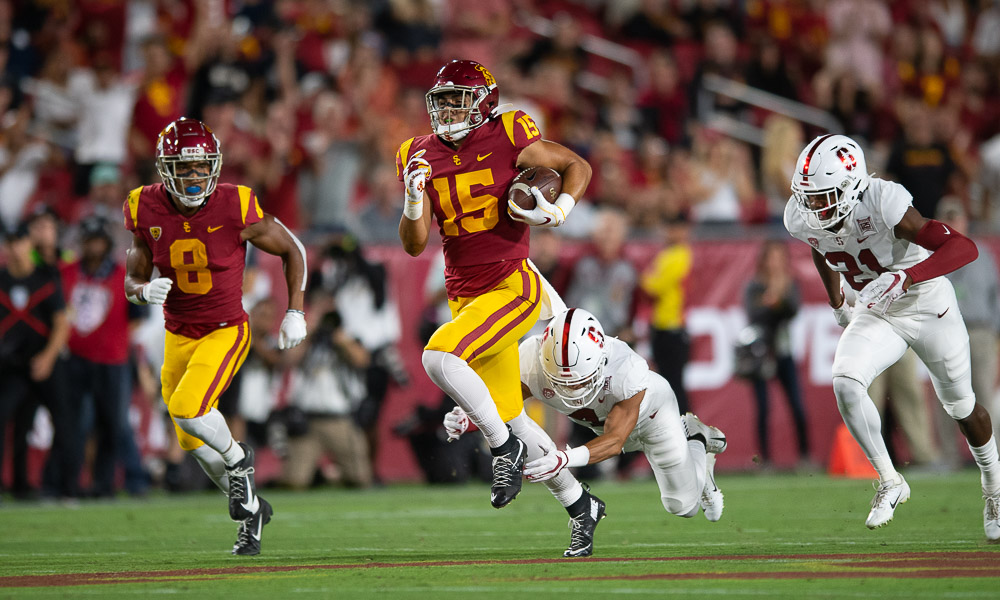 Drake London is called a wide receiver by the USC media guide. Film analysts might call him a tight end. But opposing defenses are going to call him a matchup problem, as the USC offense will call on him plenty this upcoming season.

It’s not usual to think a passing offense could get better the year after losing a high second-round NFL pick who caught 101 passes for 1,275 yards and 11 touchdowns. But there’s nothing usual about the group of receivers USC brings back for the 2020 season. Amon-Ra St. Brown and Tyler Vaughns return as the two veterans, but it might be the expected leap from London that helps keep this passing game among the elite in college football.

“I think that Drake London is as talented of a player as I’ve been around,” USC offensive coordinator Graham Harrell said this week. “To combine the size that he has with his body control and his ball skills, his toughness. I think that he creates natural matchup problems for people.”

An interesting aspect with London is that he blurs the line between wide receiver and tight end, but Harrell said that’s just where football has gone.

“I think that the line’s been blurred even in the NFL,” Harrell said. “If you look at the tight ends like the Travis Kelce’s of the world that are out there making plays, the line is very blurred between receiver and tight end. A big-bodied receiver could be labeled as a tight end.”

In the NFL, two tight ends rank among the top 10 pass catchers. And of the six players with at least five touchdown receptions, three are tight ends.

In college, players like Florida’s Kyle Pitts and Ole Miss’s Kenny Yeboah have turned in terrific starts to the season, with 11 total touchdowns in just six games.

“Like a lot of those elite tight ends in the NFL, I think he’s a similar matchup issue,” Harrell said. “If you put someone small on him, he can manhandle them and he’s just bigger. And if you put someone big on him, he’s too athletic.”

London won’t be called a tight end by anybody at USC, but his versatility allows the Trojans to use him like one. He could be a typical “big receiver” in the mold of a Keyshawn Johnson or Mike Williams, but it’s his hybrid ability that could make him something different.

The tight end position has been an interesting one to watch over the past year. USC had veterans in Erik Krommenhoek and Josh Falo on the roster last season, to go with freshmen Jude Wolfe and Ethan Rae. Krommenhoek and Falo combined for just 15 receptions, while Wolfe missed most of the year and Rae missed all of it. Meanwhile, London caught 39 passes for 567 yards, including a touchdown in each of the season’s final five games and a two-game regular season finale of 14 receptions for 253 yards.

Lake McRee (Austin, Tex./Lake Travis) checks in at 6-foot-4, 217 pounds–London is listed at 6-foot-5, 210. Michael Trigg (Tampa, Fla./Carrollwood Day) is 6-foot-4, 230 pounds. Both USC commits are just as comfortable split all the way out wide as they are lined up next to an offensive tackle. Trigg’s 20 receptions this season are nearly half the team total, while McRee is tied for the receptions lead on his team.

Both are willing blockers, but it’s what they can do in the passing game that makes them unique talents. And McRee specifically said watching what London did last season made USC an attractive destination.

“What we’re really looking for is someone that can stretch the field and be a big matchup issue in the pass game, but is big enough and has enough body weight to go in there when we need him to help in the run game,” Harrell said of how the Trojans are recruiting the tight end position. “That’s the ideal of it. Drake’s not labeled as a tight end. He’s a receiver. But if we ever ask Drake to go in there and cut off a defensive end, he’d be just fine doing it…In recruiting it’s the same thing. We want someone who can go out there and can run and catch the ball and create matchup issues in the passing game, but still physical enough and not scared to go put their face on someone and can add an extra gap or an extra element in the run game.”

This season, Rae continues his recovery from a high school knee injury, but Falo and Krommenhoek are back as seniors, and Wolfe looks healthy and ready to contribute. Head coach Clay Helton mentioned that Wolfe had an explosive touchdown play during Wednesday’s full-pads practice, and Harrell specifically pointed to Wolfe’s growing involvement in the offense. Helton said he feels the tight end position could play a much bigger role in the passing game this season.

With Michael Pittman’s departure, there’s a chance London could spend some time outside to help fill that void, but it’s pretty clear the USC offensive staff likes what they found with London at the spot he played last season.

Helton said he could see the light turn on for London last season during the game against Colorado, when London finished with seven catches for 85 yards. He caught his first touchdown pass the following week.

“He’s a guy that is going to have to play a whole lot of snaps and I think he knows that,” Harrell said. “If we want to win at the level we think we’re capable of winning at this year, he’s going to play a large role in that.”

With St. Brown, Vaughns and London returning, to go along with the expected emergence of redshirt freshman Bru McCoy, the return of John Jackson III and true freshmen Gary Bryant Jr. and Josh Jackson Jr., the Trojans will likely again have one of the top wide receiver groups in all of college football.

St. Brown’s dominant athletic ability make him an obvious pick as the potential No. 1 receiver for the Trojans this season. But the versatility London gives Harrell and quarterback Kedon Slovis as an option in the passing game should make him a player to watch.

“You’ve got Amon-Ra and you’ve got Tyler, who have been around for a long time and made a whole lot of plays, and Drake’s kind of the youngster,” Harrell said. “But he has a different skill set than those guys…He’s going to be a key part of what we do and he’s going to have to elevate his game to an even higher level…I think he’ll be playing with a whole different level of confidence because of the experience he has, and his role in this offense is going to be vital.”