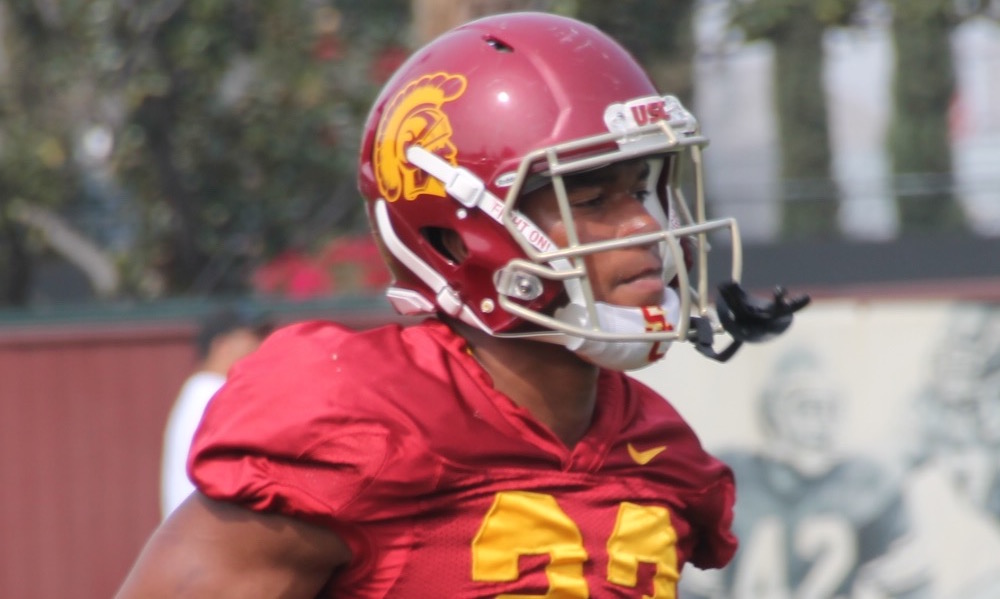 The biggest question coming out of spring is the one Clay Helton said wouldn’t get answered this spring and that’s the selection of a starting quarterback. Helton made it clear all along that he wouldn’t be naming a starter until fall camp which let everyone know that JT Daniels was going to be given the opportunity to compete for the job once he arrives. That left the spring for Matt Fink and Jack Sears to try to get a leg up on the competition before Daniels gets here but that didn’t happen, which means all three quarterbacks will take part in summer PRP’s (player-run-practices) that start in early June.

2. What will be injury status of key starters such as Stephen Carr, Daniel Imatorbhebhe and Marlon Tuipulotu?

Both Carr and Tuipulotu will be attempting to return from back issues and while Helton is optimistic about both being ready for fall camp there is always the uncertainty that comes when the back is involved. As for Imatorbhebhe, his hip/groin/thigh issue has lingered since early summer of last year and since he didn’t do any on-field work in spring it’s hard to judge where things are at with him too. There are certainly other injured players to various degrees but those three are so important to their positions and unfortunately we probably won’t know where they are until fall camp begins.

3. What will be the long-term status of Jackie Jones?

Jones is suspended for the opener and sat out spring ball, and was rarely spotted at practices in that time. Truth be told, his absence wasn’t a big storyline in spring as others such as Isaiah Langley, Jonathan Lockett and Greg Johnson showed that there are other available options, not to mention Iman Marshall and Ajene Harris providing solid senior play. Don’t get me wrong, Jackie has the kind of talent that can make a real difference but with chemistry and trust being such important issues for the staff you get the sense that Jackie will need to get to work to find his way back to the top of the rotation, and we’ll see if that is enough.

4. Who emerges at receiver behind Tyler Vaughns and Michael Pittman?

We didn’t get any real answers in spring although Velus Jones (photo above) made a splash during a scrimmage that was the best day of spring for the offense. Velus has true 4.4 speed and is probably the best option for a deep threat, which is something the Trojans haven’t had lately. Velus is also likely to be joined at his slot position from Amon-Ra St. Brown in the fall and between the two of them it could be a nice duo with all that Amon-Ra brings and Velus bringing his speed. Trevon Sidney could also be in that mix, he was the starter for most of spring and has potential. On the outside, Josh Imatorbhebhe had a few practices where he looked really good and ready to turn the corner with his physical skills (Tee Martin called him the fastest player on the team) but he also missed time with nagging issues. I think Josh is right there, it’s just a matter of consistency at this point. I was hoping to see more from Randal Grimes but he also wasn’t on the field for all of spring, hopefully we see him more in summer and fall camp. Then there is 6-5 Devon Williams, an incoming freshman who spent a lot of time at spring ball, he is raw but I’m not going to rule him out for finding a role.

5. What will be the identity of the USC offense?

For many Trojan fans this is the top issue facing the team right now. It’s not a matter of numbers as last year there was a 4,000-yard passer, a 1,500-yard rusher and a 1,000-yard receiver, and this year there is enough talent to produce at high levels again (even while breaking in a new QB). Instead, it’s a commitment to a style of play within the offense, to have the ability to physically impose your will when needed, and that’s something that has been notably missing in recent match-ups with fellow blue-blood programs. One of the lasting images of the off-season is the Ohio State defensive front simply controlling the Cotton Bowl as the Trojans were limited to 57 yards rushing on 36 carries. Earlier in the year against Notre Dame there were 31 attempts for 71 yards, and last year against Alabama the number was 64 yards on 30 carries. These numbers do not reflect the history of the USC offense and they are critical to taking that step to competing at the highest level. We know it can happen, we saw it in the first Stanford match-up when the Trojans ran the ball 48 times for 307 yards in a game that had one former USC offensive lineman say “For the first time in 10 years I watched Trojan football”. Will we see more in the fall? I do think we will but how much more is the question.