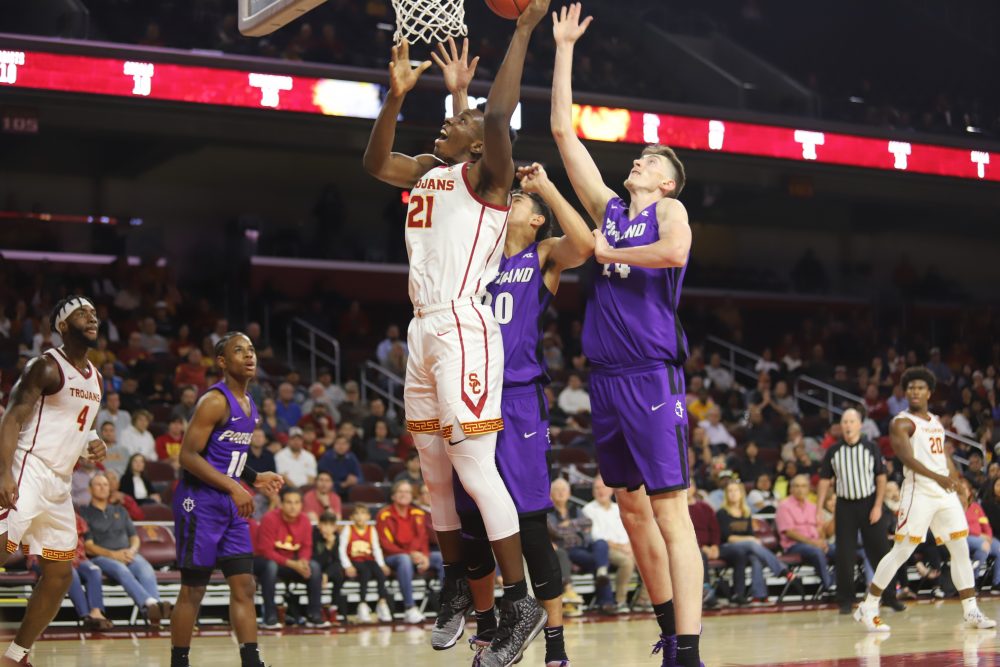 The Trojans won Friday night, 76-65, but it was a lot tougher than expected. The Portland Pilots are a much better team than they were at the end of last year, when they lost their last 17 games. They came into Galen having won in their opening game by 50, though it was against Division III Willamette. The Trojans led by 6 at the half, and never trailed in the second half, but couldn’t pull away with a big surge as they did on Tuesday against Florida A&M. The Pilots’ guards are very quick and are good shooters, and their front line gave them enough inside to keep the game close. The Trojans will take the win, but will have a lot of work to do before their next game against South Dakota State next Tuesday, followed by their first road game at Nevada next Saturday.

What Did We Learn About The Trojans?

In pregame comments, Associate Head Coach Jason Hart made this statement, and continued by saying this is their deepest, most athletic, and strongest physical team. I agree, but they did not play like it against Portland.

Due to foul trouble, Big O only played 6 1/2 minutes in the first half and 21 for the game. He still scored 20 points on 10-13 from the field, with 10 rebounds (5 on each end), 1 block and 2 steals. He also altered several shots, and was dominant inside. Several of his baskets came on offensive rebounds. The Trojans don’t have anyone who can replace what he does. In a mock NBA draft out earlier this week, he was projected as the 13th pick. It is very early, and things could change (either way), but he has been sensational so far. He matched up well against Villanova’s super freshman 6’9” Jeremiah Robinson-Earl (who was listed ahead of Onyeka in the mock draft) in the exhibition game. From the exhibition game matchup, Robinson-Earl looks to have a better developed offensive game, but Big O is a better rebounder, defender and shot blocker. Portland only double teamed him a couple of times when he got the ball near the basket, and he was able to split the double team or pass out of it to an open teammate. Expect to see more double teams in the future, with opposing coaches trying to force someone else to beat them.

Before the game, Associate Head Coach Jason Hart said that the defense was far ahead of the offense, in part as a result of the emphasis on defense since practice began. The staff concluded that the top teams in the NCAA tournament are usually built on defense, and that was the Trojans’ goal. The defense was very good in the opening game, but did not play well against Portland. The Pilots shot 13-28 from three, many on open looks. Their quick ball movement and high screens often left shooters on the perimeter with open shots, or SC guards trying to keep post players from getting the ball inside. Coach Enfield switched the defense part way through the second half, and went to a smaller lineup of four guards and one big for large stretches. The defensive plan to have all five players switch everything was not working when the Trojans big men switched to cover Portland guards.

The Trojans Found Their 3-Point Shot

SC went 10-20 from beyond the three point line, with Jonah Mathews 4-9, Elijah Weaver 3-4, and Quinton Adlesh 3-3. Before the game, Coach Hart said that they wanted to play inside out, to create good three point shots, which in turn would open things inside. That offensive game plan worked well.

Turnovers Are Still A Huge Problem

Troy had 20 turnovers, and now have 37 in two games. Last year they averaged 11 a game. A few of the turnovers were on offensive charging fouls, but the first two games suggest this needs to be cleaned up. By and large it was not the point guards turning it over; Elijah Weaver, Ethan Anderson and Kyle Sturdivant had five TO’s among them, and Elijah played off guard for large stretches when paired with Ethan.

Ethan Anderson Was A Recruiting Steal

The freshman point guard looks like a running back at 6’1” and 210 pounds. He was not heavily recruited out of Fairfax High, despite being the LA City Player of the Year. His incredible athleticism was on display against Portland when he went high over the rim for a one handed offensive rebound and tried to slam it home. The fact that his slam bounced high off the rim didn’t negate his effort. After the game, Coach Enfield complimented Ethan on his court vision and leadership, and mentioned a few times Ethan’s 10 assists and only 2 turnovers. He will be a big contributor this season.

Nick Rakocevic Is Back

Nick played a good all around game, with 11 points on 5-8 from the field, 8 boards, 1 block, 3 steals and 2 assists.  He missed a very ill advised late three, when the ball was passed out to him on the perimeter after an offensive rebound and plenty of time left on the shot clock. He can make the occasional three; in pregame warmups he sunk several in a row, but this was not the time for a 3 ball. Otherwise, Nick was very effective, and stayed out of foul trouble.

The Trojans Dominated Inside

SC out scored Portland by 26 in the paint, and by 10 on second chance shots. They also out rebounded the Pilots by 15. This inside advantage was needed, as Portland’s guards got a lot of open shots and made a high percentage.

Andy talks often about how deep his team is; 7 players played between 21 and 26 minutes, with only Jonah Mathews getting more time. But the bench scored only 16 points, and 9 were on Adlesh’s three pointers. The full rotation needs to produce.

Drake London Will Not Practice Until Football Season Is Over

Coach Hart said before the game that the 6’5” wide receiver is a great athlete and scorer (he averaged almost 30 points per game as a high school senior), but he will not practice until football season ends.

Any win is a good win for this young team as it works to establish an identity. The effort was present throughout the game, but until the Trojans went to a small lineup with Big O and four guards, they struggled on the defensive end. Portland is much better than last year and has multiple quick guards who can shoot. But this was not a good defensive performance, and if the Trojans are going to win with defense, they may consider dropping the switch on all screens and anyone can guard any opposing player defensive approach, or at least not stick with it so long when it isn’t working. A lot to build on after the first two games, but also a lot to work on.