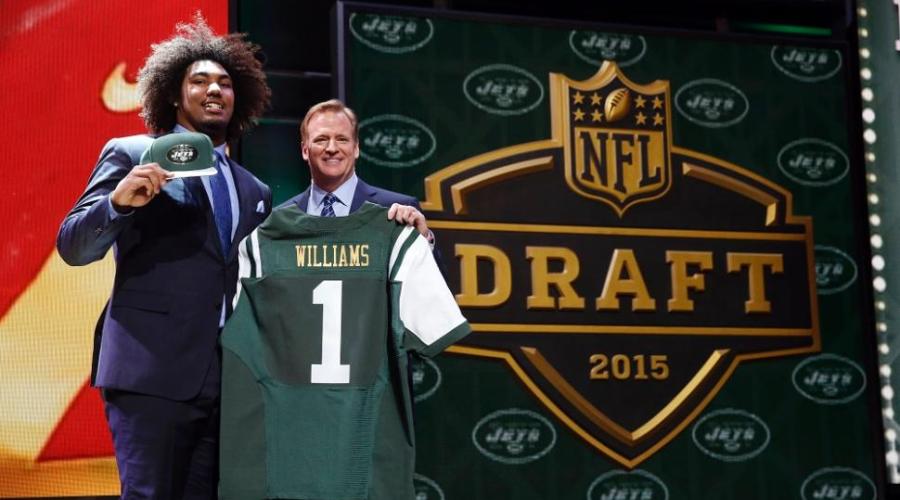 * USC defensive lineman Leonard Williams was chosen by the New York Jets with the 6th pick of the first round. Williams was considered by many as the best overall prospect in the draft and was expected to go higher but when he fell to six the Jets couldn’t pass up adding him to an already solid defensive line. Williams becomes the 78th first round draft pick in USC history, most in the nation.

What he brings: The best all-around defender in this class, Williams’ ideal position fit is as a 5-technique defensive end in a 3-4 front, but he has the versatility to create mismatches at multiple spots along the D-line. He is an outstanding run defender who also has good quickness, strength and a variety of moves as a pass-rusher. He has a good motor and plays with an edge.

How he fits: Williams is strictly a value pick here, he’s our top-rated defensive prospect. He adds immediate depth as a 5-technique behind Sheldon Richardson and Muhammad Wilkerson, who has been on the trading block. Williams also has the versatility to line up in multiple spots along the defensive line, giving first-year head coach Todd Bowles the flexibility to jump into a four-man front when necessary.

* USC wide receiver Nelson Agholor was selected by the Philadelphia Eagles with the 20th pick of the first round. Agholor fits the profile of recently departed Eagles receiver Jeremy Maclin, and he will also be expected to contribute as a punt returner. Nelson becomes the 79th first round draft pick in USC history, most in the nation, and he joins former Trojans Mark Sanchez, Matt Barkley and Kevin Graf on the Philly roster.

What he brings: He doesn’t have elite explosiveness, but he’s a smooth and sudden athlete with good route-running ability to gain separation from coverage. He’ll never be a big-play threat on contested catch situations, but he’s a quick and decisive runner after the catch and as a returner. He has the versatility to fill multiple roles in an offense.

How he fits: The Eagles fill one of their most pressing needs with this pick and though Agholor is the No. 2 receiver left on our board at this point, he’s a safer pick than UCF’s Breshad Perriman. Agholor’s ability to line up on the outside, work out of the slot and even work out of the backfield will make it easier for Chip Kelly to create favorable matchups without having to make substitutions. He also bolsters an already strong Eagles return game.