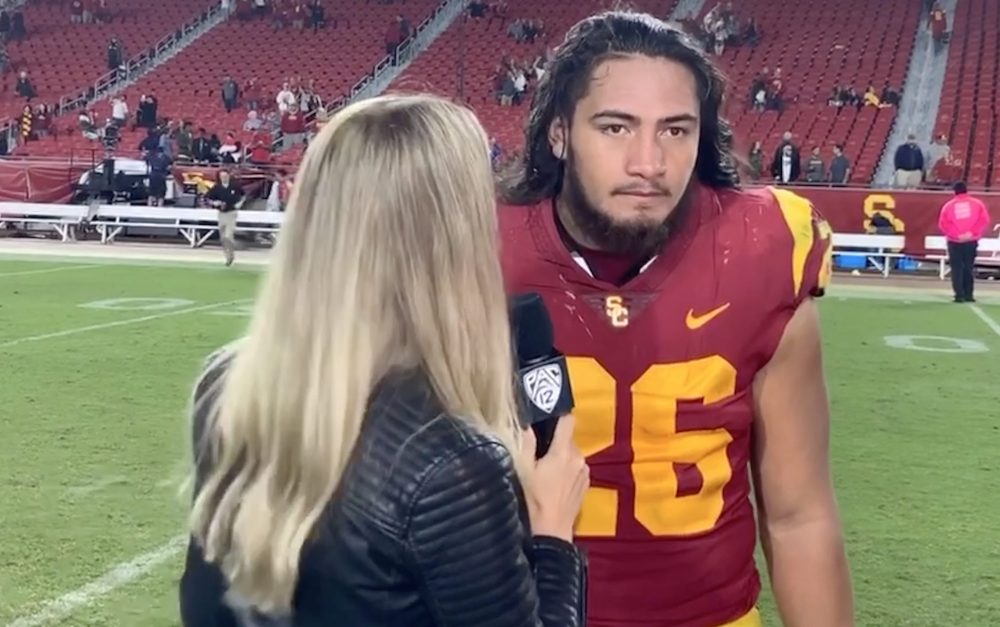 Despite knowing they’d be without four starters and losing two more during the game, the USC defense put together a performance that Trojan fans haven’t seen in some time in stifling Arizona on their way to a 41-14 win.

Linebacker Kana’i Mauga, filling in for Gaoteote, was outstanding, finishing with 13 tackles, a forced fumble, a sack and an interception.

Head coach Clay Helton was pleased with the defense’s performance.

“We talked about getting to the quarterback, and to have seven sacks on the night I was really, really happy with the pressure,” Helton said.

“[It was] really seeing what others are doing to defend it and put in some of those things this week, and I thought our kids thrived off of it, and I was looking forward to watching it,” Helton said. “They did a really nice job against one of the better athletes I think in the country.”

The defensive pressure was suffocating and led the Wildcats to turn to true freshman Grant Gunnell, looking for some kind of spark.

“There were blitzes that we didn’t pick up,” Arizona head coach Kevin Sumlin said of how USC was able to stifle his offense. “But even during that time, they whipped us up front. We couldn’t run it and then even when they didn’t blitz, Khalil was running for his life. And when Grant got in there, he got hit a bunch of times.”

Heading into the fourth quarter, with the Trojans leading 27-0, USC had limited Arizona to 167 total yards, 72 passing yards. And lost somewhat in the performance was the field position the defense consistently provided for the offense. The Trojans started eight drives on their own 38-yard line or better, with Mauga’s forced fumble at the end of the first quarter leading to a 34-yard drive and USC’s first touchdown of the game.

And what the defense started, the offense finished. Held to just 163 total yards at halftime and protecting a 17-0 lead, the USC offense came alive in the second half, putting together three-straight touchdown drives to put the finishing touches on a blowout win. Over the final two quarters, USC ran for 133 yards and threw for 152, on its way to finishing with 448 total yards and 6.8 yard per play.

True to form in this game, it was a backup providing the spark for the offense, as running back Kenan Christon — called on due to injuries suffered by Stephen Carr and Markese Stepp — rushed for 103 yards and two touchdowns on just eight carries. His 55-yard strike with 13:13 remaining in the fourth quarter pushed USC’s lead to 34-0 and provided the first glimpse at the raw speed of the true freshman, as he broke through the line and was gone, as multiple Arizona defensive backs couldn’t take the correct angles to even get a hand on him.

“I was just being patient and following my blockers,” Christon said of his long touchdown run. “The O-line opened up a huge hole for me and I just finished.”

But USC was never truly threatened in this game, as Pendergast put another terrific game plan together to limit Tate’s effectiveness. USC brought almost constant pressure against Tate, as the defensive line did a terrific job staying in their rush lanes and cleaning things up when Tate handed off or bringing him down quickly if he kept it.

Tate threw for just 47 yards and was held to negative-27 yards rushing. Nine USC defenders recorded at least half a sack against Arizona, with John Houston’s 1.5 leading the way. Houston also recovered a fumble.

USC’s defense did not allow an Arizona drive of more than 37 yards until a56-yard touchdown pass with 12:12 remaining in the fourth quarter, when the Trojans sent in the backups, with as many as eight true freshmen playing at once.

The offense sputtered some in the first half, as the Trojans punted on their first four drives that began on their own side of the field.

“I didn’t think we had a great rhythm to it, to be honest with you,” Helton said. “I thought we kind of found that rhythm once our running game started going and we found a little bit more advantageous coverages because of it.”

“It’s been every game that, you know, we’ve kind of had to diagnose what the defense is doing, and what we scouted is not what we got in the first quarter,” Helton said. “And there’s just a little bit of time that takes place to go, ‘Okay, this is what we’re getting, and this is our adjustments,’ and I credit coach and the offensive staff.”

The win moves the Trojans to 4-3 on the season and 3-1 in the Pac-12, as USC took a big step in the Pac-12 South thanks to the win, coupled with Utah’s win against Arizona State. The Trojans and Utes are now tied atop the division at 3-1, but USC holds the tiebreaker thanks to their head-to-head win.

USC’s 10 first-quarter points were the most Arizona has allowed this season.

Kedon Slovis finished 19-for-28 for 232 yards and two touchdowns.

Kenan Christon and Quincy Jountti both recorded the first carries of their USC careers.

USC lost six players to injury during this game, as Drake Jackson (ankle), Talanoa Hufanga (shoulder), Markese Stepp (ankle), Stephen Carr (hamstring), Malik McClain (shoulder) and Munir McClain (knee) all left the game and did not return. Their ability for next week’s game against Colorado will be updated by Helton following Monday’s practice.

Arizona entered the game averaging 509.3 yards of offense per game — good for ninth in the country. USC held the Wildcats to 385 yards, with 218 of those coming in the fourth quarter.