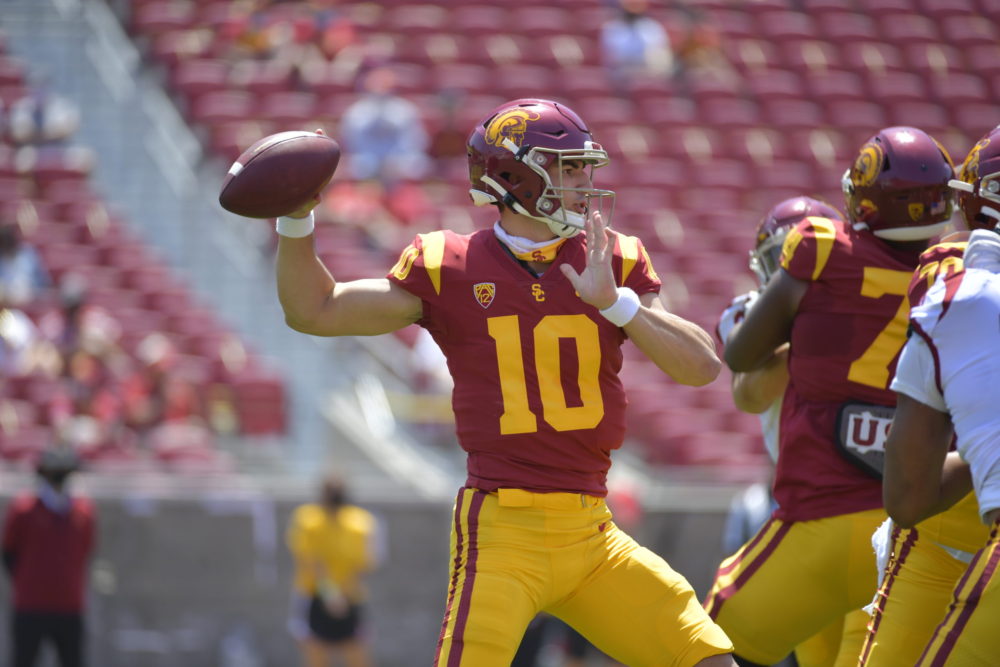 The backup quarterback battle was one of the most interesting stories of USC spring ball and it just got another chapter added to it on Monday, with Mo Hasan announcing that he suffered a torn ACL during Saturday’s Spring Game.

Outside of Kedon Slovis, Hasan was the only USC quarterback will college experience. He started one game and played in six during his time at Vanderbilt, and was an option to step into the role vacated by Matt Fink, who served as USC’s backup quarterback each of the past two seasons.

Hasan came up limping after a run early during the spring game and spent the rest of the scrimmage on the trainer’s table. On Monday, Hasan posted to twitter that he’d torn his ACL.

This shines the spotlight directly on true freshmen quarterbacks Jaxson Dart and Miller moss. The competition between those two was one of the storylines coming in due to the fact that few programs sign two high-profile quarterback prospects in the same class.

Now, there is a clear path for the winner of that battle to slot in behind Kedon Slovis and sit one snap away from taking meaningful snaps as a true freshman.

At this point, Dart has done the most with his opportunities. He’s been able to flash his running ability and his tremendous arm strength, tossing a few passes during the spring game that resulted in tremendous catches by Trojan wide receivers. But it’s far too early to count Moss out, for he’s had his moments during some practices as well. He was never able to get into a rhythm during the spring game and struggled a big to find consistent connections with his receivers, but the game appears to be slowing down for him a bit and he’s looking more comfortable in the pocket compared to very early in the spring.

It will be interesting to see if the Trojans look to bring in a transfer this summer. Typically a college program likes to have four eligible scholarship quarterbacks for a season. That would add another layer of intrigue to the position behind Slovis.

Hasan is the third major injury of the spring for USC, which lost safety Max Williams to a torn ACL and defensive tackle Brandon Pili to a torn achilles.