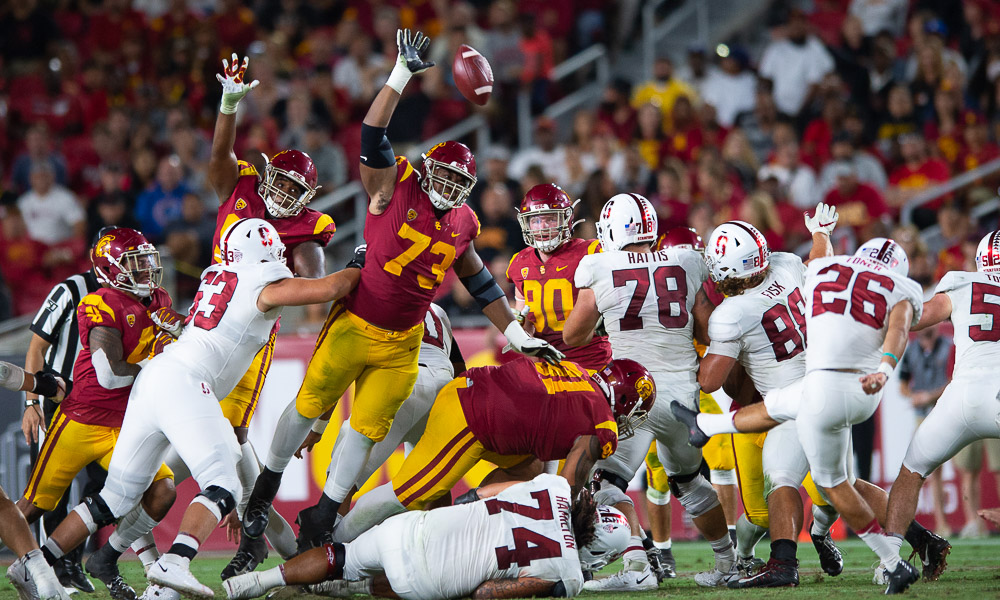 USC left tackle Austin Jackson announced on Wednesday afternoon that he will forgo his final year of eligibility and make himself eligible for the 2020 NFL Draft.

This is a substantial loss for the Trojans, as USC will now need to replace both starting tackles, as starting right tackle Drew Richmond exhausted his eligibility with his one season at USC as a graduate transfer.

Jackson saw time as a true freshman in 2017 and started at left tackle the past two seasons. He has been mentioned as a potential first-round selection in the upcoming draft, so his decision is an understandable one.

The Trojans are left without an obvious replacement for Jackson. There will likely be some mixing and matching along the offensive line during the spring as USC looks for answers at both tackle spots. This also allow the USC coaches to look to the NCAA Transfer Portal once again for an answer along the offensive line, just as they did with Richmond last offseason. As for potential solutions on the roster, true freshman Jason Rodriguez could get a look at left tackle, Jalen McKenzie could slide over from right guard if he doesn’t get the first look at moving out to right tackle, or Frank Martin could get an opportunity there in his final season with the Trojans. USC signed six offensive linemen in the 2020 recruiting class, and while it would be a little surprising to see any of them start the season opener against Alabama at left tackle, several could take reps there during fall camp.

It’s also a big blow for a USC offense that had an opportunity to bring back nine starters for a unit that was terrific at times in 2019. Now, the Trojans will be without Jackson, along with Richmond and wide receiver Michael Pittman. Fellow offensive lineman Alijah Vera-Tucker and wide receiver Tyler Vaughns could have decisions to make in terms of potentially making themselves available for this upcoming NFL Draft as well.

Jackson earned Pac-12 Offensive Lineman of the Week honors for his performance against Stanford this season. He also became even more of a fan-favorite last summer when he donated bone marrow to his younger sister, Autumn, who suffers from Diamond-Blackfan anemia. Despite missing summer conditioning as he needed to limit contact with people as much as possible, Jackson returned to the team in the fall and started every game at left tackle.