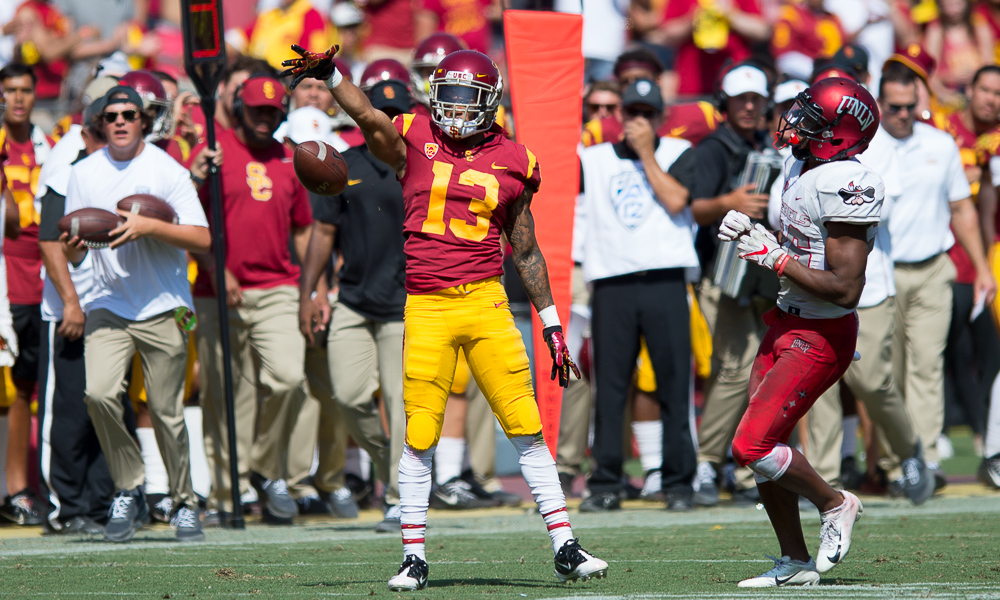 The same day word leaked that incoming freshman Bru McCoy’s transfer to Texas was made official, the Trojans are set to lose another wide receiver, as reports indicate Trevon Sidney has entered the NCAA Transfer Portal.

The Athletic’s Bruce Feldman reported that Sidney’s name now appears in the portal, making him eligible to be recruited by other programs.

After a quiet redshirt freshman season in 2017, it looked like Sidney might break out this past fall. A practice field highlight machine, Sidney had seven catches for 72 yards in a season opening win against UNLV. But that momentum didn’t last, as he added just four catches for 32 yards over the rest of the season.

Earlier this month, former USC wide receiver Randal Grimes transferred to Minnesota, while 5-star incoming freshman McCoy is headed to Texas. McCoy’s decision is thought to have been influenced at least in part by the departure of Kliff Kingsbury, who became the head coach of the Arizona Cardinals a little more than one month after accepting the offensive coordinator position with USC. Kingsbury was announced by Arizona on Jan. 8, and USC is still without an offensive coordinator. The Trojans hosted official visitors last weekend without an offensive coordinator and could be doing the same this weekend, leaving them just one final recruiting weekend before February’s signing day to bring in recruits and allow them to meet their future coordinator.

And this might not be the end of wide receiver news for the Trojans. USC’s two remaining unsigned commitments in the 2019 class are wide receivers Kyle Ford and Puka Nacua. Ford was a tough recruiting win against Oregon, while Nacua chose night to sign early and is being chased by Utah, Washington, and other programs. It will be worth watching what those two prospects to as signing day approaches.

While McCoy’s departure is significant for the present and future of USC, Grimes and Sidney looking for opportunities elsewhere doesn’t register as much of a surprise. Talented players with potential who feel as though they could be producing more on the field will always look for playing time elsewhere. But after a 5-7 season and seemingly no clear answers at offensive coordinator after Kingsbury’s departure, these moves loom a little larger when it comes to the Trojans current situation.