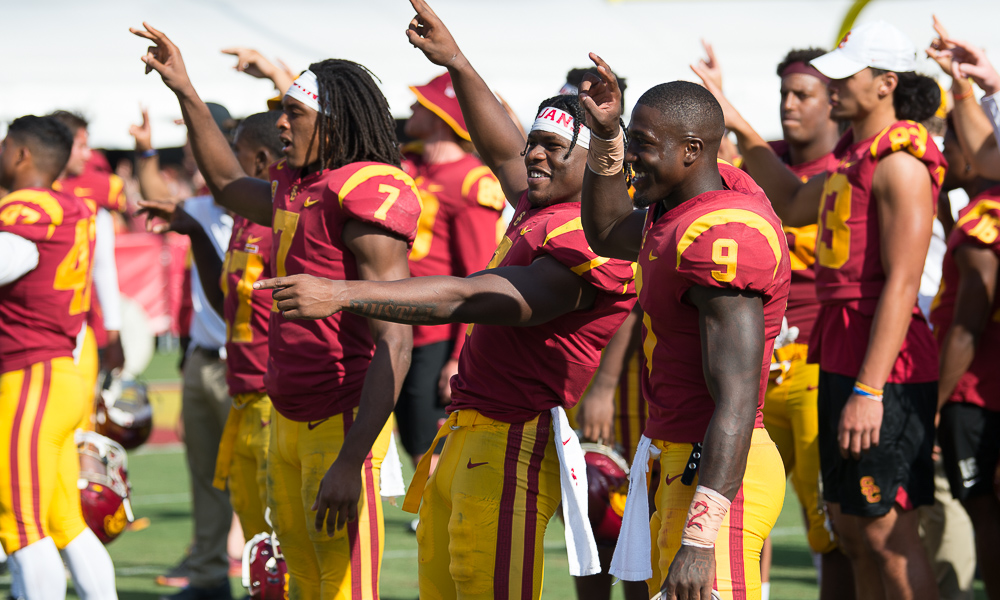 Bullock’s commitment celebration was led off by head coach Clay Helton, with what is beginning to be a familiar sight.

USC’s defensive coaches were quick to jump in as well, as the trio of defensive coordinator Todd Orlando, safeties coach Craig Naivar and cornerbacks coach Donte Williams have added a bunch of talent to the defensive back room already in this class.

Take Back The West has become a calling card for USC coaches looking to lock down recruiting in the Los Angeles area specifically. Director of Player Development Gavin Morris is utilizing the #StayHome hashtag as the past four commitments have all come close to home.

The offensive coaches got in on the action as well. Bullock recorded six interceptions as a junior and can go up and get the ball with the best of them as a safety.

There were a couple of automobile related celebrations as well, as offensive graduate assistant Viane Talamaivao went with a Los Angeles theme, while wide receiver coach Keary Colbert went with a mascot, as Bullock is a member of the Muir Mustangs.

USC Director of Scouting Trey Johnson has become the go-to for celebration gifs after commitments and he delivered again.

There were also celebrations from Bullock’s fellow USC commitments, as Anthony Beavers indicated that there are more to come.

And running back Brandon Campbell continues to prove that he is one of the elite recruit-recruiters in the country.

And if USC coaches were wondering whether or not their plan to emphasis local recruiting was noticeable, there was this comment from Rudy Cambero, the co-offensive line coach and recruiting liaison at Servite High School in Anaheim.