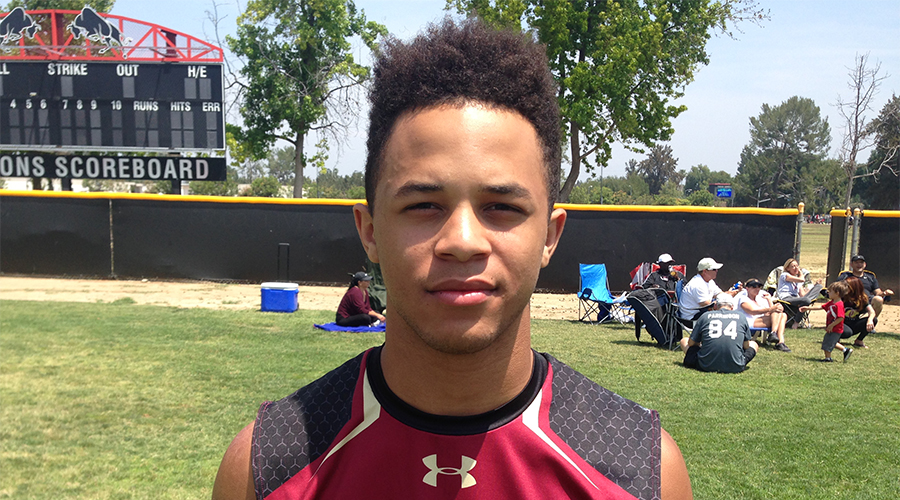 With a pair of Oaks Christian stars from the Class of 2018 committed to the Trojans in quarterback Matt Corral and linebacker Bo Calvert, plenty of USC fans will undoubtedly be keeping close tabs on the Westlake Village (Calif.) powerhouse in the fall.

But if this spring is any indication, there’s another, just-emerging prospect on the same team whom the Trojans faithful might also want to become familiar with – Class of 2019 wide receiver Mycah Pittman.

Possessing a familiar last name, he’s the brother of current USC wide receiver Michael Pittman Jr., a highly touted member of the Class of 2016 who arrived on campus in January as an early-entrant signee.

As a freshman on varsity at Oaks Christian this past season, the younger Pittman took a backseat to his heralded older brother and the other veteran receivers on the team, hauling in a modest 14 catches for 189 yards and one touchdown, while also rushing for a score.

Now showcasing a bulked-up 6-foot, 190-pound frame, Pittman has been given a chance to take on a dramatically larger role by Lions head coach Jim Benkert this spring, and he’s making the most of it – standing out as one of Corral’s favorite targets in 7-on-7 play, and making highlight-reel catches with great regularity.

“Coach [Benkert] wants me to be the guy this year, and to make the plays,” Pittman said. “I had to kind of take a year off because I was a freshman on varsity and I had to give up plays to the upper-classmen, so I’m definitely ready to take over now.”

The fact that Pittman is so eager to step into the spotlight shouldn’t come as a surprise considering his bloodlines. Not only has his older brother found quite a bit of success on the gridiron already, but his father, Michael Sr., is a former running back who spent 11 years in the NFL, winning a Super Bowl title with the Tampa Bay Buccaneers in 2003.

“I just grew up in a football family, and I’ve loved it ever since I put on the pads, “ Pittman said. “It’s kind of like an addiction. I just love football.”

Unable to produce much in the way of film for college coaches to go off of at this point in time, Pittman has yet to receive his first offer. But with the way that he’s been performing over the course of the past two months, there’s reason to believe that will likely change much sooner than later.

Pittman has interest in USC for obvious reasons.

“My brother is there, to begin with,” Pittman said. “And the school, in general, the academic rankings they get are impressive. And they always have players getting drafted into the NFL. That’s always been my dream – to be in the NFL.”

Having been up to the USC campus on a number of occasions with his brother, Pittman has had an opportunity to meet the Trojans coaching staff in the past, but only briefly.

“I’ve met everybody there through my brother, honestly – all of the coaches, but I haven’t really talked to them,” Pittman said. “They were always focused on my brother when I was there, so they always just told me that I looked good and stuff like that, but hopefully as time goes on, and I get better and better, they’ll start talking to me.”

One person who hasn’t wasted any time dishing a recruiting pitch his way, however, is his brother.

“He’s already trying to recruit me to SC,” Pittman said with a laugh, “but I am keeping an open mind. He loves it there. He likes everyone there, and he’s doing well in school. He said that the hardest part was just adjusting to the schedule that they have.”

With all of that said, Pittman is making sure to keep everything in perspective. He’s well aware that, as just a freshman, there will be plenty of time to think about colleges and the recruiting process later on. For now, his primary focus is to keep working hard, day in and day out – all to ensure that he’s prepared to seize what he views as a golden opportunity sitting in front of him right now.

“I’m looking forward to being the guy, and making big plays for my team – helping us win games,” Pittman said. “And that’s the whole point, winning games and being the best.”