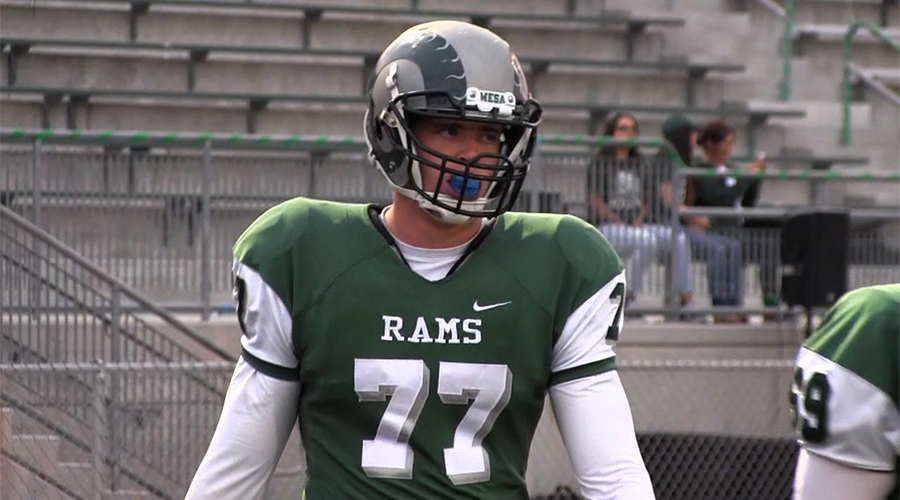 USC coach Clay Helton said his top priority for the Trojans this off-season is to improve the physicality in the trenches. So far in his first recruiting class Helton has received verbal commits from four players on the line, two on both sides of the ball, so we take a closer look at what the Trojans are getting from each player:

The first thing you notice about Frank is his footwork. He is a very polished offensive lineman who is dominant in his run blocking. He locks on to his target and finished blocks with a mean streak. He shows an outstanding ability to move laterally, being quick enough to safeties and even corners. His ability to pull probably means a position switch to guard in college, but he has the size to play either tackle or guard. He shows pretty good feet in pass protection, but at this point, is still in technique lacking. Although he is quick, Martin shows a tendency to try and twist his opponent to the ground instead of stonewalling them. this could lead to a problem in college where players are a lot quicker and stronger. He also stands straight up on a few pass pros, but that is a quick fix through coaching. Overall, a very good offensive lineman that is a little bit raw has a high upside.

Quick. Aggressive. Dominant. Those three words come in mind when watching Nathan Smith’s tape. As a run blocker, he is an absolute beast. He attacks the defense like a man possessed. Even when he knocks his opponent down, he always adds an extra blow for good measure. As a pass protector, Smith (photo above) uses his 6 foot 7 inch frame to his advantage, using his long arms to control his opponent. His kick step shows good fluidity, but technique wise he lacks compared to some of the other incoming recruits. Also, he’s pretty light for an offensive tackle, checking in at 279 pounds. A solid redshirt candidate with the potential to start at tackle down the road.

A physical specimen that is still very new to football, Betiku has the highest upside out of any lineman coming into this year’s class. He has a very good motor that finishes tackles and always never gives up. However, in high school, it is shown that he utilizes his genetic gifts more than technique. Sometimes, he is slow off the ball and stands straight up,  but uses his strength and size to make up for it. He does show that he has very good hands, as both his swim and rip moves are effective, and his open field pursual is off the charts. With a little coaching and fine tuning, Betiku is a candidate to be a breakout star.

Liam Jimmons
Probably the least heralded recruit in this year’s class, Liam Jimmons is a tough, hard-nosed, football player. He won’t wow you by making spectacular plays or light up the stadium with his athletic feats, but he is very disciplined and makes plays. At this point he is a better run stopper than pass rusher. He is able to take on double teams and set the edge as well as anybody, but he relies too much on his size to rush the quarterbacks. He needs to be able to dip when he rips and explode of the ball if he wants to become a true three down player. Overall, he is a solid recruit that is a long term project rather than an immediate contributor.