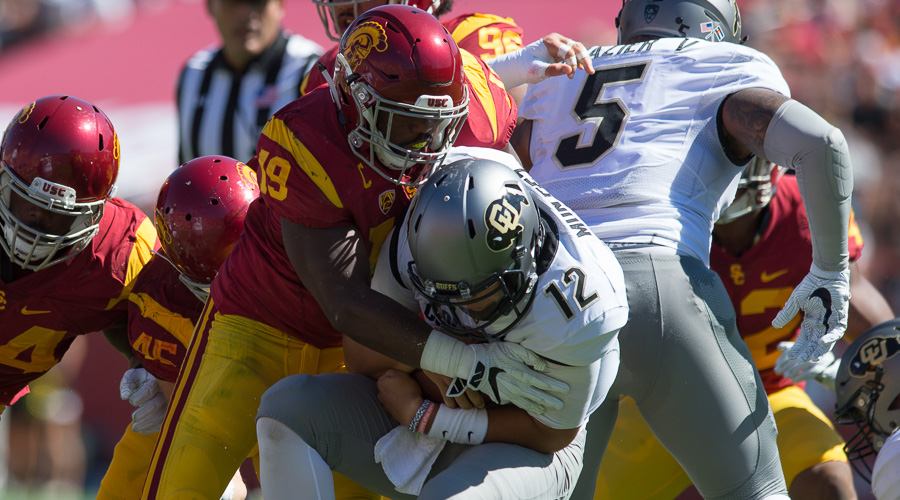 The upcoming game against Colorado could be important symbolically for the Trojans with the opportunity to clinch the Pac-12 South title with a win.

Why is that important? Because even though USC has won 40 conference titles through the years (we’re counting the 2 that were vacated by sanctions) it has been a while since the last title was won in 2008, and for a program like USC that is simply too long to go between conference championships.

So that is the first order of the day for these Trojans, to win the Pac-12 title, and the only way you can win the title is to be in the championship game, which makes the game against Colorado an important one. Of course, the Trojans basically have a two-game cushion (a one-game lead and the tie-breaker over the two schools behind them) so they only need to win one of the next two games to be in, but it sure would be nice to get the win out of the way against Colorado so the team can focus on beating the Bruins for the sake of beating the Bruins.

As for the prospects of beating Colorado, this is certainly a different Buffaloes team than the one who won the Pac-12 South last year, with a coach in Mike MacIntyre who was named Coach of the Year in the conference. This year the Buffs have struggled to a 5-5 record with their only conference wins coming against Oregon State and Cal, and they need a win in this game to become bowl-eligible.

It’s not like Colorado is void of talent as there are several familiar names, particularly on the offensive side of the ball.

QB Steven Montez filled in admirably at times last season as a freshman when the senior QB was down with injury (Montez was 25-40 for 197 yards last season vs the Trojans) and this year he has put up solid numbers again with 187-300 (62.3%) for 2,404 yards with 16 TD’s against 7 interceptions.

There is also the school’s career all-purpose yardage leader in senior RB Phillip Lindsay (5,596 total yards) who also became the first running back in CU history to go over the 1,000 yard rushing mark in back-to-back seasons (1,334 this year, 4th in the country).

There are a trio of senior receivers in Bryce Bobo (48 catches), Shay Fields (45 catches) and Devin Ross (38 catches).

Defensively, the Buffs are led by junior linebackers Rick Gamboa (78 tackles) and Drew Lewis (76 tackles), and junior CB Isaiah Oliver (out lately with undisclosed leg injury). Oliver, a junior, has been projected as a first round NFL pick in some mock drafts. This is the biggest area of difference for the 2017 Buffs compared to last year when the defense was a strength of the team, including losses of all DL who contributed and 3 DB’s to NFL draft, along with the defensive coordinator. That has left them vulnerable up front (#103 rush defense in the country giving up 200 yards per game) which is great news for the Trojans with the way Ronald Jones and the run game has gone the last two weeks.

True freshman placekicker James Stefanou from Australia is 16-18 on FG’s and 31-31 on PAT’s.

Last week Colorado lost to ASU 41-30 after being up by 10 points in the fourth quarter. In that final period, however, CU gave up 191 rushing yards and had a punt blocked, which allowed ASU to run off 24 points on the way to the victory.