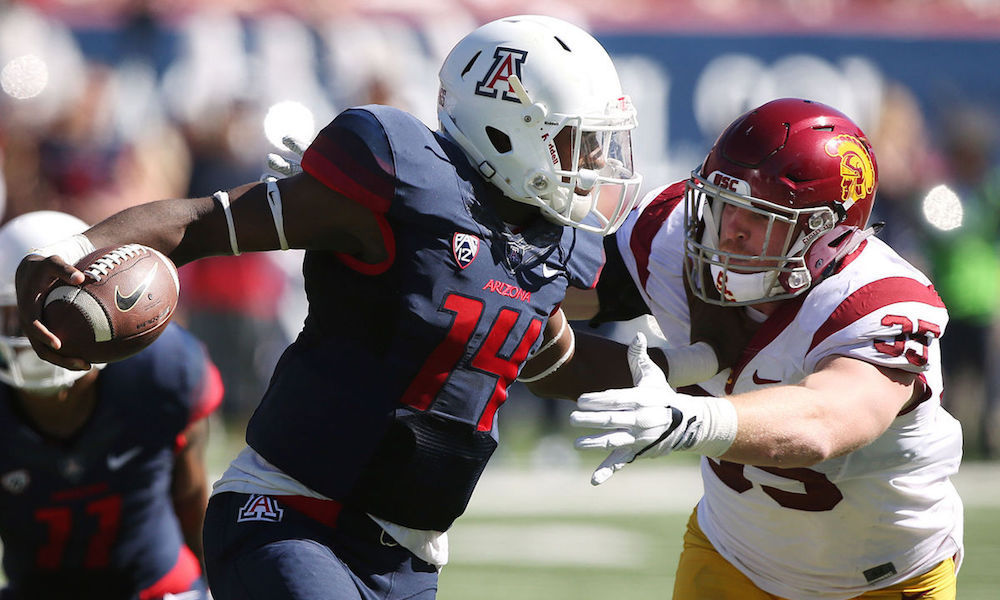 The calendar is about to turn to November and the Trojans are getting ready to host the Arizona Wildcats in a game that will determine the leader atop the standings in the Pac-12 South. It’s fairly simple right now as USC looks to capture the conference title for the first time since 2008 – win the remaining games on the schedule and the Trojans will be playing in the Pac-12 title game on December 1st.

The Wildcats come into the Coliseum with a lot of confidence (3-0 on the road this year) behind the stellar play of sophomore quarterback Khalil Tate (another Serra product, 46-67 passing, 784 yards, 6 TD, 3 pick along with 69 carries, 926 yards, 13.4 average, 8 rush TD). They have won four games in a row and have scored at least 45 points in each of those games, including a 58-37 victory over Washington State last weekend.

That winning streak coincides with the emergence of Tate, who has simply put together some impressive results, primarily with his legs and touch on the deep ball. Khalil rushed for an FBS-QB record 327 yards against Colorado, won the Pac-12 Offensive Player of the Week honor three weeks in a row and is also completing 69% of his passes. Tate came on the scene after Brandon Dawkins (63% of his passes, 5 TD, 3 pick) left the Colorado game following the opening drive with a minor injury, it wasn’t a case of Dawkins playing bad, he just got overtaken by what Tate has done.

Tate (6-2, 220) was offered a scholarship by the Trojans late in the recruiting process, after he had already committed to Arizona. He listened but there was a thought that SC might move him to running back and that played a part in him sticking with the Wildcats.

Last week against WSU, Tate lost a fumble and was intercepted on back-to-back drives that allowed the Cougars to take a 2nd half lead. On the next four possessions, Tate led four touchdown drives of 65 yards or more to close out the win.

Leading the way at the RB spot are J.J. Taylor (Centennial HS, 92 carries, 519 yards) and Nick Wilson (69 carries, 353 yards). Taylor is a redshirt freshman with quickness and moves.

Defensively, Arizona has 14 interceptions on the year (19 turnovers overall) and are led by CB Lorenzo Burns (son of former USC DB DeChon, 53 tackles, 3 picks) and a pair of true freshmen linebackers in Tony Fields (58 tackles) and Colin Schooler (47 tackles).

Their defense has been inconsistent this year, last week they gave up over 600 yards of offense to Washington State but only 44 yards rushing, and had four interceptions.

Rich Rodriguez in his 6th year at Arizona and the recent win streak has Wildcat fans talking potential Pac-12 title instead of replacing the coach, especially with 61 redshirt or true freshmen on the roster.