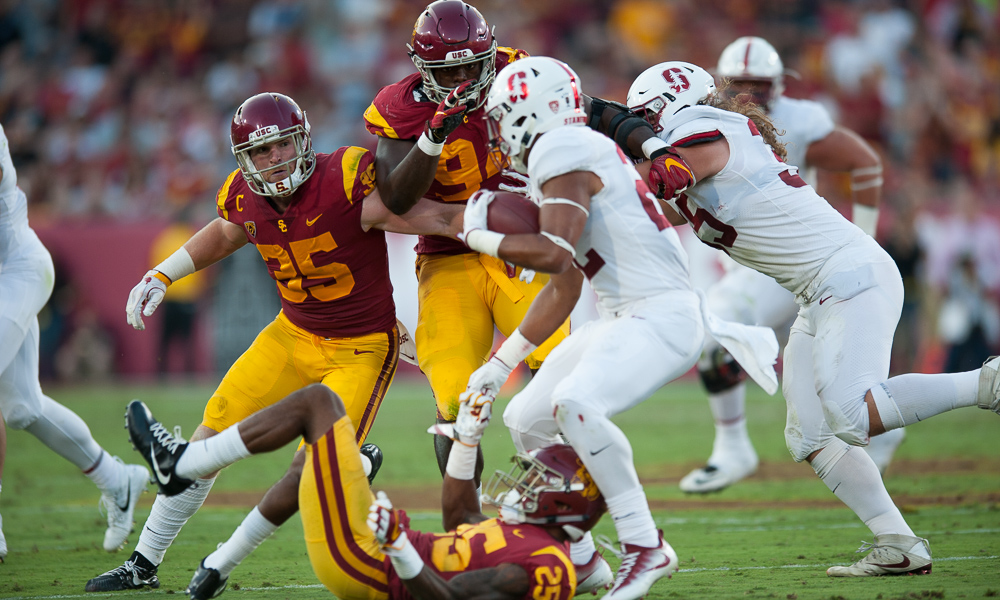 It has been too long, 2008 to be exact, since the USC Trojans have captured a conference title.

In fact, it’s been so long that the conference is now the Pac-12 instead of the Pac-10 as it was known then, and the method of choosing the champion is no longer based on in-season results, instead it is now based on the winner of the conference championship game.

No matter how you look at it, there’s no doubt that for Trojan fans it’s time for the drought to be over, especially when you consider that USC has won 40 conference titles through the years (two were vacated due to sanctions) and the streak was at seven in a row under Pete Carroll following that 2008 season.

Who could have imagined that there would be a period like this when Carroll and his band of Trojans were swashbuckling through the conference, but that has been our reality, in large part because of those very sanctions that certainly had an impact on the overall strength of the program. Sure, there was an appearance in the title game three years ago, one that ended in a 41-22 loss to Christian McCaffrey and the Stanford Cardinal, but the Trojans right now in the second year under Clay Helton appear to be on more solid footing than they were for that game, and the hopes are certainly higher for Trojan fans to come away with the win.

Last year in his first full season as head coach, Helton guided the team to a dramatic and wonderful Rose Bowl win but his boss, USC athletic director Lynn Swann, was quick to point out that “our goal of winning the conference was not met”. It was a bit of a harsh reality check but also a firm reminder from one of those who helped set the tradition of the program. There has been a lot of winning done over the past two years to help prepare for this moment, including a victory earlier in the year against Stanford (the opponent the Trojans will face on Friday) but for USC to truly claim that the program is back and ready to resume their place at the top of the conference there needs to be a standing as conference champion.

So how much can be gained from looking back at the Trojans 42-24 victory over Stanford earlier in the year? The Cardinal have gone 8-2 since that point, including losses to San Diego State and Washington State, and victories over Notre Dame and Washington.

Stanford still leans on the run game behind Bryce Love, who battled a high ankle sprain to rush for 125 yards against the Irish, and he ranks 2nd nationally in rushing with 168 yards per game (1,858 total). Love had a memorable 75-yard touchdown run against the Trojans but that was one of the few highlights on the night for the Cardinal as the Trojans put together their most complete game of the year to come away with the 42-24 victory.

Perhaps the biggest change for Stanford comes at the quarterback position. Keller Chryst was the starter in that first meeting but he has since been replaced by K.J. Costello, a sophomore from Santa Margarita who was recruited by USC, and Costello has been solid while hitting 61% of his passes for 1,169 yards with 9 TD’s and only 2 picks. The top pass catching options are still J.J. Arcega-Whiteside (41 catches) and Trent Irwin (39 catches).

“Stanford is a hot football team winning 8 out of the last 9 games. I look at how their defense is playing, they are typically strong up the middle for a David Shaw football team led by Phillips in the middle of the line, he’s a physically mature guy with good football instincts who can play in your backfield. On offense K.J. Costello has done a nice job protecting the football.

“For us I think the biggest different from that first meeting is the growth of our skill players, particularly our receivers like Tyler Vaughns and Michael Pittman, and then getting Daniel Imatorbhebhe back as well.”

“They really took it to us in that first game. They were hitting on all cylinders, they ran the ball, they threw the ball, they had good pass protection. Their QB plays better under fire, he’s always a danger, and they are running the ball again and back to being what they want to be on offense.

“I think we have a better sense of who we are and what we want to be than we did in the first meeting. The danger in these rematches where you know each other so well is the guessing game. Should we change? Will they change? At the end of the day, let’s just prepare as best we can and know there will be some adjustments to make, and go play ball.”