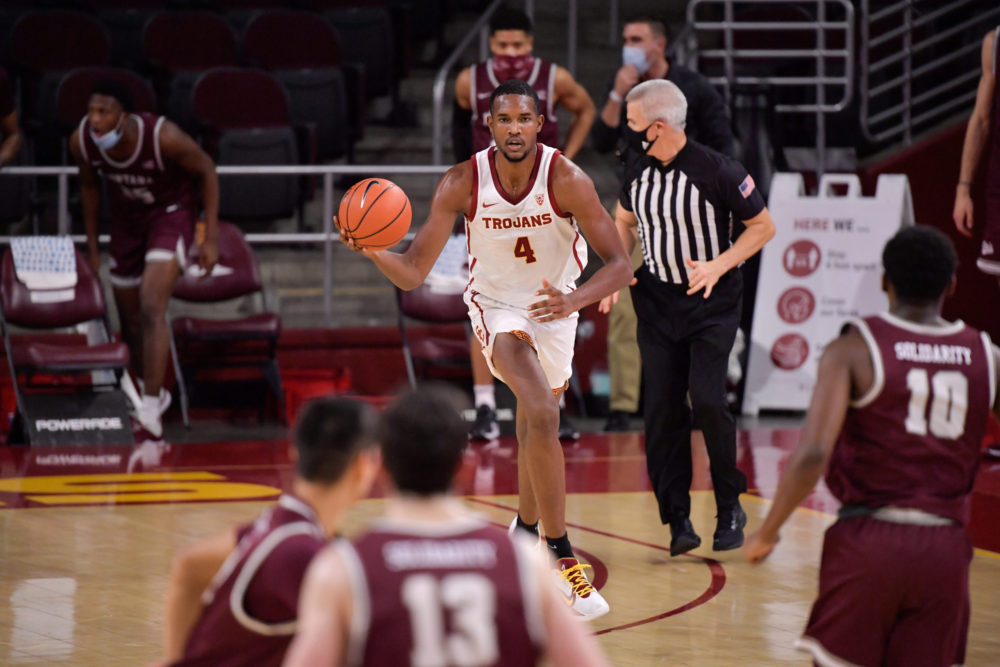 The Trojans are two-thirds of the way to potentially one of their best regular seasons in decades. Even so, something was missing in the win over UCLA; it would have been a blast to hear the “Just Like Football” chant in a packed Galen.

The Trojans are ranked 20th in this week’s AP poll and 16th in the most recent NET rankings. Joe Lunardi currently has the Trojans as a four seed which would be the best seed for the Trojans since the Bibby years. USC has only been outscored in the second half twice this season and won those games against Montana and this Saturday’s opponent Washington State.

USC’s scoring margin is +12.1, the best at USC since the 1970-1971 team that finished 24-2 and outscored their opponents by 14.0. That year the Trojans were briefly ranked number 1. The Trojans have a big rebound margin for the season but are 0-2 when out rebounded. Since the opening overtime win against Cal Baptist, USC has held their next seventeen opponents to a combined 30% from three. The Trojans’ opponents are averaging 37.9% from the floor, sixth best in the country.

The Trojans are the only PAC 12 team in this week’s AP Top 25, which confirms that the conference is weaker than expected. ASU and Stanford appeared poised to have good seasons but have disappointed and Oregon has only played eight conference games due to Covid issues. The Ducks are 5-3 in conference play and may not have time to make up all of the postponed games. Oregon has missed two games against UCLA and one against the Trojans.

The Trojan record has been helped by player absences when they played UCLA and Stanford. For perspective, though, USC’s point guard Ethan Anderson didn’t play in the UConn and Colorado losses and the Oregon State loss was his first game back and he wasn’t close to 100%.

Stanford beat UCLA without its three starters and at this point there has not been an announcement if any will play when the Trojans host the Cardinal on February 22, or why super frosh Ziaire Williams isn’t playing. UCLA’s missing front court players Cody Riley and Jalen Hill wouldn’t have changed the outcome on Saturday. Riley has been playing well, but not that well. Hill has struggled and his minutes have been declining. There has not been an announcement explaining why Hill did not play and it may relate to his diminishing role.

Evan’s 16.3 point average is sixth highest in the Pac-12. He leads the league with 9.0 rebounds per game and in total blocks with 53. He has made 58.3% of his shots, third best in the conference. His presence inside has been an important factor on the defensive end, forcing opponents to alter shots or pass the ball outside for fear of another Mobley block.

If you knew nothing else about the Huskies and learned only that AD Jen Cohen gave head coach Mike Hopkins the dreaded vote of confidence on Sunday after their latest loss it would be clear that UW has problems. Cohen said that “(Hopkins) job is absolutely not in jeopardy,” and added, “I’m excited to be his partner.”

Sounds dire. She also explained that the team didn’t have as much time together before official fall practice began as other teams in other parts of the country. She surely isn’t referring to the conference teams in California.

The Huskies are in eleventh place at 3-14 overall and 2-10 in the Pac-12, ahead of only 2-12 Cal. If there is a positive for Washington it is that their two conference wins came since they were smashed by the Trojans at Galen 95-68 on January 14. They won back to back games four point games over Colorado and Utah before losing their last three to WSU by 15, Oregon State by 20 and Oregon by 12. Their only non conference win was against Seattle U. The Huskies have made 42% of their shots, 33% from three and 73% from the line.

In the first game against USC the Huskies made 38% of their shots and 39% from three. Stevenson led the team with 16 points followed by Bey with 11 and Roberts with 10. Green had only 5 points on 2-11 from the floor and finished with 3 assists but also 6 turnovers. Green has been playing better in the last few weeks and if the Huskies are going to be competitive against the Trojans, Green needs to have a big game.

The Cougars have struggled this season but have shown some recent signs of improvement. After a very weak non conference schedule the Cougars are 11-8 on the season and are in tenth place at 4-8. The Trojans beat the Cougars 85-77 at Galen last month. The Cougars have two conference wins over Cal and since playing the Trojans they have won two of their last three games beating UW 77-62 and upsetting Oregon 74-71. The loss during this stretch was by two points to OSU. They play UCLA Thursday before playing the Trojans on Saturday on ESPNU. Kyle Smith is in his second year as head coach in Pullman and there is a belief around the program that Smith has the Cougars pointed in the right direction. They have made 42% of their shots and 33% from three.

6’3” senior guard Isaac Bonton averages team highs with 18 points, 4 assists and 2 steals. He is a very streaky shooter, making only 39% of his shots and 32% from three. The Cougars are a tough team at home when Bonton has a big game.

6’10” athletic freshman center Efe Abogidi was not highly recruited but has had a solid first season. He averages over 9 points on 48% from the floor and 33% from three. He also averages a very high 84% from the line. The other main scorer is 6’5” sophomore guard Noah Williams who averages over 13 points. He has a good slash line: 44% FG/ 43% threes/ 78% FT.

In the first meeting Bonton scored 27 points, making 10-21 of his shots and 4-8 from three. Abogidic finished with 10 points on 3-6 from the floor and 0-3 from outside. The Trojans were led by Tahj Eaddy with 21 points and 4 assists. Evan Mobley scored 16, Isaiah White 15 and Drew Peterson 15 points and 11 rebounds.

USC should come home with two more road wins. If the Trojans are focused on the game on Thursday against the Huskies and are not looking ahead or still celebrating the win over the Bruins than USC should handle UW by double figures.

The game at Pullman has the potential to be much more difficult, though it all revolves around Bonton. He plays at a very fast pace, is a streaky shooter and often forces bad shots. He played very well at Galen and if he has another big game it could be a struggle for the Trojans. Expect USC to focus the defense around Bonton to limit him to closer to his season averages and force him to take a lot of shots to get his points. Abogidi is improving but his time to be a difference maker against the Trojans should be in another season or two. The Trojans should win this game and their success in defending Bonton will determine the margin.