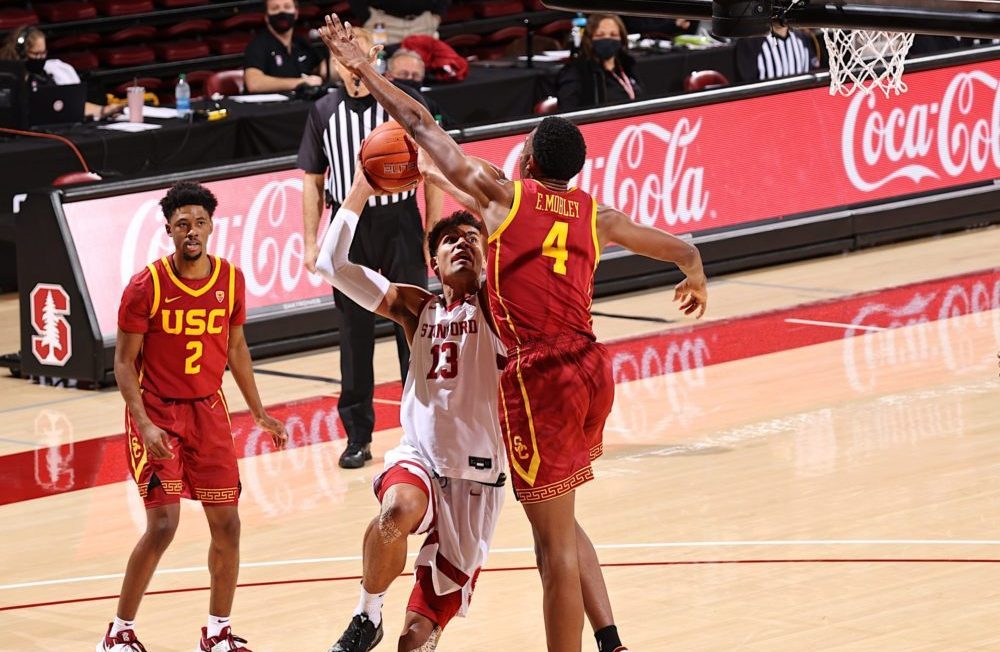 The Trojans can still win the conference title.

The conference has officially announced how the regular season title and the seeding for next week’s conference tournament will be determined. The team with the best winning percentage will be the regular season conference champion in this season where teams will have not played the same number of conference games. A tie will be broken by head to head records and if there is still a tie the team with the best record against the next best team will be seeded first. The same system will be used if teams tie for any other position in the standings.

After Oregon’s win over Arizona on Monday night, UCLA and Oregon are one – two in the standings, each with 4 losses. Oregon will play 18 conference games, UCLA 19 and USC and Colorado 20. The Trojans have five losses and Colorado has six.

In order for the Trojans to finish first they need to win both games this week and Oregon must lose to UCLA or Oregon State. The current top three teams cannot end up in tied with each other due to the different number of games played.

Colorado only plays ASU on Thursday. If they win they will finish 14-6. If the Trojans split this week and CU wins, the Trojans and the Buffs will be tied and Colorado holds the tie breaker and would be seeded ahead of USC.

It may not all be sorted out until the Oregon – OSU game on Sunday; at the latest we will know after that game if the Trojans finish first, second, third or fourth. If UCLA beats Oregon earlier in the week the Trojans fate will be decided on Saturday at the latest. It’s all a bit confusing; if the Trojans had won of the three recent losses they would be in the driver’s seat this week; instead they need to find their “A” game and be playing well entering the conference tournament and earn a good NCAA seed.

USC and Stanford played on February 2 in the Cardinal’s first game this season on campus at Maples Pavilion. The Trojans won 72-66 by scoring the final six points over the last two minutes. The Trojans were behind by seven midway thru the second half, but led by Drew Peterson and Tahj Eaddy, were able to come back and win. The pair scored 13 of the Trojans’ final 17 points. In that game Stanford became the first team this season to shoot over 50% from the floor against the Trojans.

Davis’ injury gave little used freshman point guard Michael O’Connell the opportunity to start and this game was his coming out party. He scored 20 points on only 12 shots, making seven from the floor, 2-5 from three and 4-4 from the line and added 4 rebounds. He has continued to start along side Davis after the latter returned.

Junior forward Jaiden Delaire led Stanford with 22 points, making 10-16 shots and 2-4 from three for 22 though he did not have a rebound.

The Cardinal’s leader, Oscar da Silva, played only 24 minutes due to foul trouble and was not a factor totaling 9 points and 4 boards.

Evan Mobley led the Trojans with 23 points, making 8-13 shots and 7-7 from the line to go along with 11 rebounds. Drew played a very good final 10 minutes and finished with 15 points on only 8 shots. He made four shots from the floor including 2-3 from three and 5-6 from the line. He also had 3 assists and only one turnover. Tahj made 7-13 shots though he was 0-4 from three to total 14 points. He added 2 assists.

The Trojans were scheduled to host the Cardinal In December, but that game was postponed due to USC’s Covid issues. The game has been rescheduled a few times and the other meeting between the teams at Stanford also has had scheduling issues. The long time rivals may lead the country in games rescheduled against one another.

Stanford has all of its players back but the Cardinal has been struggling, losing four of their last six games including the last three. They lost by 9 to WSU on the road, by 3 to Oregon at home, and by 11 to OSU at home. Since their return Williams and Willis have been coming off the bench.

Through the weekend games USC’s NET ranking is 25 and Stanford is 64. The Trojans are ranked 21st in the Ken Pom rankings and the Stanford is 70. Both teams should have a lot of motivation for this game. Wednesday’s game is the final regular game for the Cardinal. They are currently 10-9 in conference play and are in sixth place, though today they would be seeded fifth and have the final bye in Las Vegas next week because fifth place Arizona is on a self imposed post season ban. If the Cardinal lose Wednesday they could finish with the sixth or seventh seed depending on how ASU and OSU finish their seasons this week. The Cardinal need some wins to make the NCAA field. A couple of weeks ago they were on one side or the other of everyone’s bubble. Now they need to beat the Trojans and win at least two games next week and that still may not be enough.

The stakes for the Trojans are huge. Besides conference standings the Trojans’ NCAA seeding will be heavily impacted by the games this week and next.

Stanford has made 47% of its shots this season but only 32% from three. They have been successful on 71% of their free throw attempts. They are led by 6’9” senior forward da Silva who will likely be a first team all conference pick. He averages 18.8 points, 6.8 boards and 2.4 assists. He’s made 58% of his shots, 30% from three and 78% from the line. He has a big body and is a tough cover inside.

Freshman guard O’Connell has come back to earth since the first USC game but has played well enough to continue in the starting lineup. He averages 6.7 points, 3 boards, 3 assists and only 1.5 TOs. His slash line is 47%/33%/ 78%.

What Do The Trojans Need To Do To Win

The easy answer is “play better” or play like they were playing two and three weeks ago. The more complicated answer is to play harder on both ends, play with more aggression and make good decisions with the ball. And they need Evan and Tahj to score and get help from one or two teammates.

With their talent and depth it is puzzling why the Cardinal have not played better since their missing players returned. To win this game USC will need to clog the lane on defense and keep the guards and wings from driving the ball. They are not a good three point shooting team and forcing them to take contested outside shots would be a big plus. USC also needs to keep Stanford off the foul line and have a body on da Silva to keep him off the offensive glass and force him to take contested shots.

Stanford is not a big team. The Trojans might consider playing Evan along with four guards/ wings at times. If everyone besides Evan plays outside Stanford will have to defend him one on one or double team and leave a shooter open. If he is double teamed the Trojan whose defender comes to double should have some opportunities for open shots or have space to slash to the basket. Screens on the perimeter can create some open opportunities.

If the Trojans play “small” they have the size at the wings to match Stanford with Isaiah White, Drew, Max Agbonkpolo and Noah Baumann. And if they use this approach, whenever Evan is on the bench Isaiah Mobley and Chevez Goodwin should both be on the court. They can’t play with Evan as the only big for long stretches because that will leave Evan on da Silva and fouls could be a problem.

As Enfield says, the “ball cannot stick.” Evan needs to make quick decisions and everyone must stop playing one on one and share the ball and get good shots. They need to play with more aggression on defense and control the boards.

Both teams need this win badly and both have been struggling lately. In the Oregon win last Monday the Trojans played so well that I thought that high level of play would continue on the mountain road trip. Now it’s hard to know what to expect from either team.

I’ll take the Trojans at home. They have a possible conference title riding on this game. The Cardinal players know it is almost certainly too late for them and in the back of their minds they may realize they will be playing in the NIT in two weeks no matter what they do at Galen.