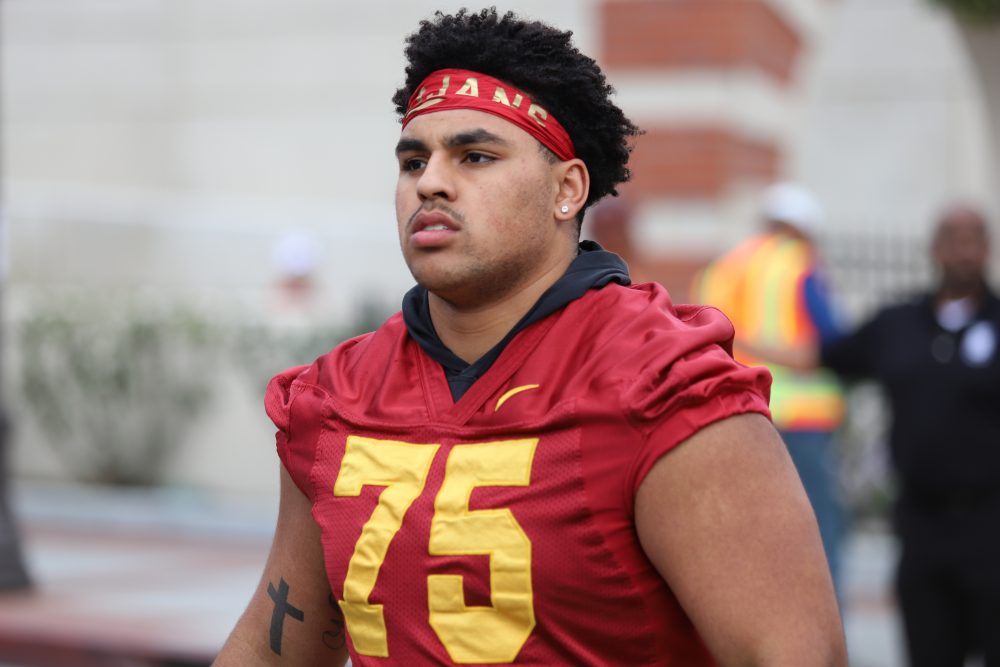 The USC offensive line took a major hit on Wednesday, as offensive guard Alijah Vera-Tucker announced that he will opt out of the 2020-2021 football season and make himself eligible for the 2021 NFL Draft.

Vera-Tucker was USC’s best offensive lineman last season at left guard and was expected to make the transition to left tackle for the 2020 season.

Vera-Tucker was a second-team All-Pac-12 performer in 2019, while making the AP All-Pac-12 first team and Pro Football Focus All-American third team. He was voted USC’s Offensive Lineman of the Year on a roster that also featured first-round NFL draft pick Austin Jackson.

“My decision to attend college and play football at USC is one of the best decisions I have ever made,” Vera-Tucker said in a statement announcing his decision. “It has been an honor to wear the Trojan uniform and represent this great University…These strong bonds and connections make it difficult to announce, but after much thought, prayer, and consideration with my family, I have decided to opt-out of the 2020-2021 college football season to declare and prepare for the 2021 NFL Draft.”

Vera-Tucker will head to the NFL having started 13 games at USC, with 25 total games played.

This is a major blow to the USC offense and the Trojan offensive line. With Jackson off to the NFL, Vera-Tucker would have been the replacement at left tackle to protect Kedon Slovis’ blindside. Now, the Trojans will need to rework the offensive line again.

One option would be to move Jalen McKenzie over to left tackle. McKenzie played right guard last season and could have moved out to right tackle to replace the departed Drew Richmond.

Another option would be to start looking at the younger players now on the roster. Redshirt freshman Jason Rodriguez was likely to be in the mix at right tackle, and he could now get looks on both sides. Ultimately, he’s a guy who could have a lot to stay about how the tackle positions over the coming few years.

For the 2021 fall season, the 2020 incoming freshmen could be the biggest beneficiaries of this move, as USC brought in six offensive tackles in the 2020 class and the competition between them to become the left tackle of the future could begin right now. Jonah Monheim and Courtland Ford are likely the two linemen in that class who are the most college ready, and with the next 12 months potentially serving as something of a bonus redshirt year, they could be ready to step in next fall.

There’s also the possibility that USC could go the transfer route along the offensive line, as a transfer would now have a clear shot at playing time, and it’s expected that student-athletes will soon be given the opportunity for a first-time transfer option that comes without the need to sit out the subsequent season.

Vera-Tucker is the second impactful USC lineman to to make this decision, as he joins defensive tackle Jay Tufele, who previously announced he would opt out of any 2020 football season in order to prepare himself for the 2021 NFL Draft.

Wide receiver Amon-Ra St. Brown and safety Talanoa Hufanga are two more Trojans who would seemingly have decision to make with regard to participating in any upcoming season and the upcoming NFL Draft.