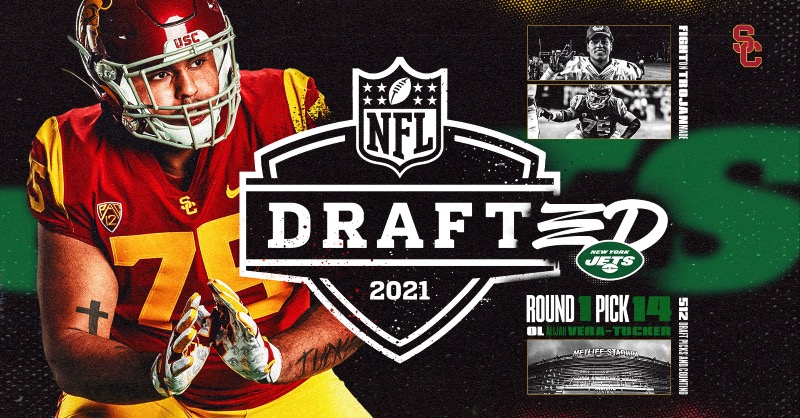 Alijah Vera-Tucker (photo above) is officially USC’s newest first-round NFL selection after the former Trojan offensive lineman was selected No. 14 overall by the New York Jets in the 2021 NFL Draft. The Jets traded up with the Minnesota Vikings to be in a position to select AVT.

Vera-Tucker has shown well at both left guard and left tackle in his college career. He’s likely a guard at the next level, but that positional versatility and his athleticism should always allow him to potentially make the move to the outside. He was viewed as the top interior offensive linemen in this draft, and his selection at this point proves that.

Vera-Tucker came to USC as a four-star prospect in the 2017 class. That’s an offensive line class that has now produced two first-round talents, with Austin Jackson going No. 18 overall last year to the Miami Dolphins.

He began his USC career as a backup right guard, playing in 12 games as a redshirt freshman in 2018. He moved to left guard and the starting lineup in 2019, putting together a terrific season that netted him numerous post season honors including All-Pac-12 second team, AP All-Pac-12 first team and USC’s Offensive Lineman of the Year award. Vera-Tucker initially declared for the draft and opted out of the 2020 season in early September, when it appeared the Pac-12 would push its season back to a January start at the earliest. With the season restarted in the fall, Vera-Tucker returned to the team and slid out to left tackle, where he put together another impressive season.

This makes three drafts in a row where USC’s first pick was an offensive lineman. Before Jackson last year, Chuma Edoga went in the third round to the New York Jets in the 2019 draft. It’s also the first time since 2011 and 2012, with Tyron Smith and Matt Kalil, that USC has had back-to-back years with first-round offensive linemen.

Vera-Tucker received congratulations from Jackson and the two will see plenty of each other with both setting in the AFC East.

The offensive staff showed off their back-2-back shirts that were made, celebrating the two offensive linemen.