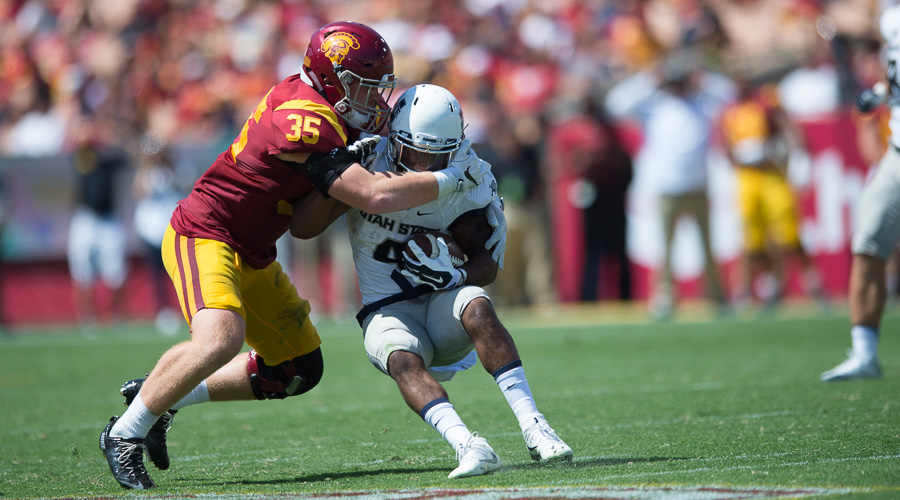 With a conference-best 22 tackles to his credit through the first two games, the performance of Trojans sophomore inside linebacker Cameron Smith has been one of the revelations of the early goings of this season at USC – not necessarily because he’s playing at such a sky-high level, but because he’s doing it so soon.

Having suffered a torn anterior cruciate ligament last October that required surgery, Smith missed extensive time this past offseason, including the entirety of spring practice. By the time fall camp rolled around, however, it was abundantly clear that he was ready to make his presence felt in a major way for the Trojans, just as he did in his initial season on campus when he earned Pac-12 Defensive Freshman of the Year honors.

And while Smith’s lightning-quick recovery might have caught many casual observers off-guard, it came as anything but a shock to those who know him best, particularly his teammates who saw the way that he attacked the rehabilitation process behind-the-scenes.

“Just by the work that he puts in here, and the time that he put in the facility, it’s no surprise that he came back from his knee injury ready to roll,” said senior inside linebacker Michael Hutchings, who lines up next to Smith. “We saw it in fall camp. We knew that he would be ready Game 1. He’s a guy that pushes it, and it’s nothing that’s new for him.”

While Smith was focused on making a speedy recovery, it certainly wasn’t easy.

“The first couple months were hard,” said Smith, who stands 6-foot-2, 245 pounds. “But I think you realize that you have to do it. You have to know that there’s a possibility that you can come back better, and that’s what I looked forward to every single day – trying to come back better than I was before.”

And if his production through the first two games of the current campaign are any kind of indication, there’s reason to believe that Smith has succeeded in accomplishing that goal. Showing absolutely no sign of his prior injury, the Granite Bay (Calif.) product has provided the Trojans with rock-steady play in the middle from his MIKE linebacker position, while also seizing a role as a team leader. And while it’s his physicality that perhaps stands out most, according to USC head coach Clay Helton, it’s one more attribute that he possesses that really sets him apart.

“He’s one of the most instinctive football players that I’ve been around in my 21 years,” Helton said. “Everybody knows his physicality in between the tackles, but the way he diagnoses a play, you know, he’s a student of the game. He’s one of those guys who knows what play is coming before the ball is snapped.”

Making a seamless transition from Justin Wilcox’s system to current USC defensive coordinator Clancy Pendergast’s scheme, Smith has looked more than at home, spearheading a Trojans defense that has performed well for the most part, particularly this past weekend when they limited Utah State to total of 49 yards on the ground – one week after the Aggies rushed for over 400 yards against Weber State.

“I think Coach Pendergast focuses a lot on everybody doing their job, and us being able to trust everybody,” Smith said. “I have to fill up a gap and know that Michael Hutchings is right next to me doing the same thing. I feel like he’s holding everybody accountable, and I think the leadership on the defense has stepped up where everyone feels like they have to do their job, so I’d say that it’s working for us right now.”

But USC faces a big test on Saturday in a highly respected Stanford team that features an offense marked by a physical brand of play – something the Trojans defense appeared to struggle with in both of their clashes with the Cardinal last season.

This time around, however, Smith sees reason for optimism.

“I think we’ve done better guy vs. guy this year,” Smith said. “We’ve got a good defensive line, and I think they’re going to step up. I’m excited for the test.”

The most daunting challenge of all for Smith and the rest of his defensive teammates, however, is in trying to contain Stanford big-play running back Christian McCaffrey, who racked up 461 all-purpose yards in the Cardinal’s 41-22 victory over the Trojans in the Pac-12 championship game last season – a game Smith did not participate in.

According to Smith, the key to stopping McCaffrey is simple – swarm the talented Heisman candidate, and most importantly, tackle him.

“We’ve watched a lot of film, and he’s very elusive in the open field,” Smith said. “That’s where he’s going to go, he’s going to go to the open field, but you have to tackle him. He’s not an, ‘I’m going to put my shoulder down and run you over,’ [running back], but he’s very shifty, and people have trouble tackling him. We have to get 11 hats to the ball and get him on the ground, and that’s the most important thing.”

With USC coming off a big bounceback victory over Utah State, which followed a crushing 52-6 loss to Alabama, Smith is well aware that this weekend’s contest could have a far-reaching impact on the Trojans’ season as whole. It’s a challenge that he’s well aware of, and one that he believes that he and his teammates are prepared to meet head on.

“I’m excited to play this game,” Smith said. “It’s either going to start us off hot, and it’s going to be a confidence builder, or not. We’ve got to play well. It’s huge for us. We know that. Every game we have to have the same mentality, but this is a big one, and I think we’re ready for it.”