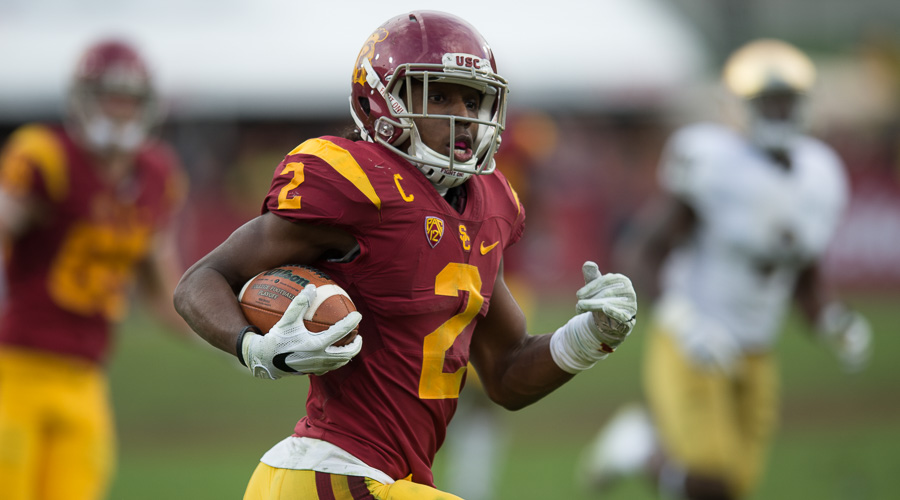 When the Trojans take the field at the Rose Bowl a week from today there will be a bright spotlight on USC junior Adoree’ Jackson, the newly minted Thorpe Award winner, 1st team All-American and Pac-12 Defensive Player of the Year.

That’s certainly an impressive array of hardware for Jackson who has already established himself as one of the top players in the nation but he’s about to find out that this setting in the Granddaddy of Them All is a completely different level with the entire nation tuned in. The good news is that Adoree’, as much as any player, is comfortable in his own skin and ready for the moment. Perhaps it will be a key interception? Maybe a long special teams return, or a chance to shine on offense? That’s one of the special things about Adoree’, it could be any one of those things happening and it wouldn’t be a surprise.

There will be plenty of chances on defense as the Nittany Lions boast a deep receiver group that helped lead a second half comeback in the Big Ten conference title game, and a quarterback who spreads the ball around with a lot of confidence. On kickoff returns, he will see 270-pound specialist Joey Julius coming down in coverage. And there are those who think the opportunity to showcase his talents on offense could be a precursor to Adoree’ coming back to USC in 2017 with more of a role on that side of the ball.

Oh yeah, there is that pesky early entry thing to worry about. Adoree’ has been asked many times in recent weeks about the possibility of leaving school early to enter the NFL draft, and he has said all the right things about waiting until after the bowl game before making a decision. There are obvious financial reasons for leaving but there are more than a few people around the Trojan program who think there is a decent chance he will stay, that the team goals of competing for a national title and the individual goal of a Heisman Trophy could be enough to swing things in favor of USC.

I’ll say this, Adoree’ marches enough to his own drum and has the kind of confidence in himself to make the kind of decision that would go against conventional thought. If you look at this past off-season, he took the entire time off away from football in order to focus on a completely different pursuit of track and field and a shot at Olympic qualifying in the long jump. He ultimately finished 10th and didn’t make it to Rio, but he responded to the time away from the football field by having the best season we’ve ever seen from a USC cornerback.

Along the way there was an acrobatic interception against Colorado, a school record for career kickoff return yardage, an onslaught of touchdowns against the Irish, and even some social media praise for his fashion sense from Deion Sanders:

For all that he has done, however, there is the possibility that things could go up another notch next week in the Arroyo Seco. This is where big-time heroes are made, and performances in this game can be remembered forever. It’s the type of setting that Adoree’ Jackson is made for, and he appears more than ready to step into that spotlight.