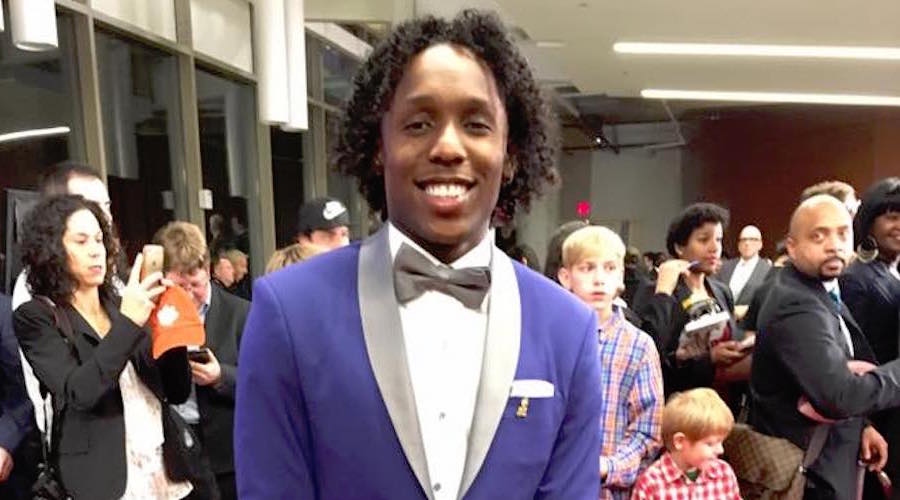 USC junior cornerback Adoree’ Jackson was named the winner of the 2016 Jim Thorpe Award, given to the top defensive back in the nation. The award was presented as part of a college football awards show in Atlanta.

He becomes the 2nd USC player to win the award, joining Mark Carrier in 1989.

Adoree’ was 4th on the Trojans in tackles (51) and had four interceptions (2nd in Pac-12) along with setting the USC career kickoff return yardage mark this year.

LOS ANGELES–USC All-American junior cornerback-wide receiver-returner Adoree’ Jackson was named the winner of the 2016 Thorpe Award as the nation’s top defensive back.

Presented by the Oklahoma Sports Hall of Fame, Jackson was announced as the winner during today’s (Dec. 8) Home Depot College Football Awards Show in Atlanta on ESPN.  He will be honored at a banquet in Oklahoma City on Feb. 7, 2017, at the National Cowboy and Western Heritage Museum.

Jackson joins 2-time All-American safety Mark Carrier as USC’s Thorpe Award winners (Carrier won in 1989).  Two other Trojans have been finalists for the Thorpe Award: safeties Troy Polamalu in 2002 and Taylor Mays in 2008.

The other finalists for the 2016 Thorpe Award were Michigan’s Jourdan Lewis and LSU’s Tre’Davious White.

Jackson, a 3-year starter and 3-way performer, is among the nation’s most exciting players.  Also a finalist for the 2016 Hornung Award and Lott IMPACT Trophy, he was the 2016 Pac-12 Defensive Player of the Year and made the All-Pac-12 first team at 2 positions (defensive back and return specialist).

He has 51 tackles (including 2 for losses of 4 yards), a team-best 11 deflections, a team-high 4 interceptions and a team-best 2 fumble recoveries on defense in 2016, he returned 22 kickoffs for 671 yards (30.5 avg) with 2 TDs and 19 punts for 302 yards (15.9 avg) with 2 TDs on special teams and he had 5 carries for 49 yards (9.8 avg) and a 52-yard TD reception while playing 13 plays on offense.  He currently is second nationally in punt return TDs, second in kickoff return TDs, third in punt returns, sixth in kickoff returns, 22nd in passes defended and 25th in fumbles recovered.

He owns the USC career records for kickoff return yardage (2,045 yards) and returns (75) and his 27.3 career kick return average is second on the USC chart behind Anthony Davis’ 34.0.  He also is fifth on USC’s all-time punt return ladder (565 yards).  His 4 career punt return TDs ties the USC record (with Nelson Agholor).  He has scored 15 touchdowns via reception (6), interception (1), punt return (4) and kickoff return (4) in his career.  Among his 4 scoring kickoff returns, he has a USC record-tying 2 of 100 yards.  He has 5 career interceptions.