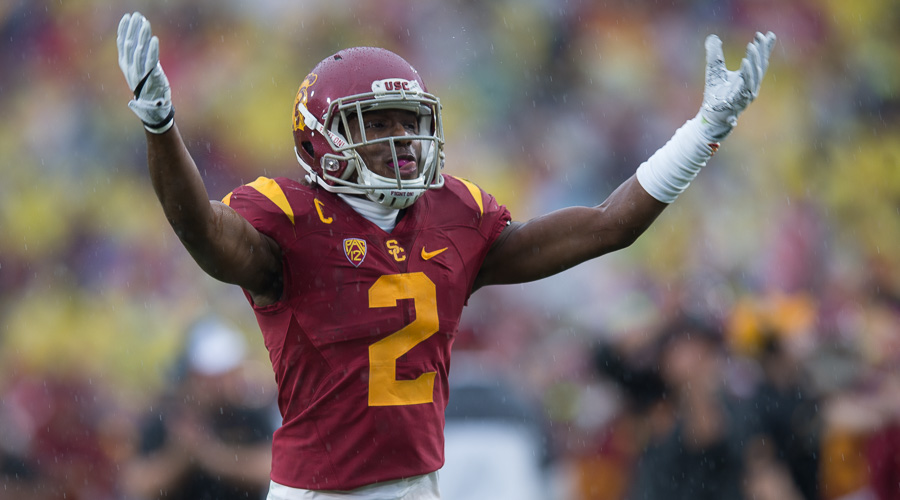 Adoree’ Jackson took his talents to the NFL today with the announcement that he would be giving up his final year of eligibility as a Trojan.

So ends the chapter of one of the most exciting players to ever wear the Cardinal and Gold. A player who will arguably go down as the best corner to ever play at USC. A Thorpe Award winner. A Rose Bowl champion. The USC career kickoff return leader. And a guy who did it all with a touch of style and pizazz that endeared him to the Trojan Family in a unique way.

It’s easy to sit here and remember the scene in the Coliseum last year in the regular season finale against Notre Dame when Adoree’ scored touchdowns in three different ways, and then was serenaded by the home crowd as the rain came down. And then there was the interception against Colorado where he seemed to defy physics by hanging his body in mid-air while somehow tapping his foot inbounds to make a play.

We won’t soon forget the on-field battle against Washington and John Ross, when Adoree’ came up with two interceptions against a quarterback who didn’t throw many all year. Or the open-field touchdown dashes against Notre Dame and Arizona State. And, of course, his kickoff returns, how about going to the house twice against Utah, once as a freshman and once as a junior? The thing that will always stand out to me about Adoree’ when watching him on kickoff returns is how he just seemed to glide at times, and those were the moments where you sat up in your seat because it was quite possible that something good was about to happen.

Yes, for all the hype that Adoree’ came into USC with, he lived up to it in big-time fashion. He delivered on defense, offense and special teams. First-year defensive coordinator Clancy Pendergast marveled at how tough of a tackler he was. He delivered in the classroom where USC academic services staffer speak highly of dealing with him, as does everybody as the university, the media, opponents, etc. It was a sign of respect in the Rose Bowl when Adoree’ hurt his ankle, and seemingly half the Penn State was gathered around or had taken a knee while he was down.

He was also one of those rare players who just transcended Trojan football a little more with the fans (Video clip with mom after Utah State game) and the kids loved him in part because he played with such joy, the joy of a child who was flipping in the end zone after a big win or dousing a teammate with a bucket of water on his birthday.

It wasn’t just the football field where he shined either. Adoree’ was a back-to-back conference champion in the long jump, and it was well documented that he trained last year for a shot at the Rio Olympic team. That is still one of the more impressive things for me from the Adoree’ Jackson resume. In the off-season before the biggest year of his football life (one which, as it turned out, would be his final audition for the NFL) he didn’t take part in a single football drill from the end of the 2015 season until the beginning of 2016 fall camp. Most athletes would be using that time to hyper train and focus on their future sport, but not Adoree’, and he responded by going out and having the best individual season that we’ve ever seen from a USC cornerback/athlete.

Now it will be interesting to see how Adoree’ projects at the next level. For all of his considerable ability, he doesn’t get the highest marks for pure coverage skills (partly due to size). There’s little doubt he can succeed as a corner but in one draft listing, Mel Kiper from ESPN, Adoree’ is not currently listed among the top 10 draft eligible players at the position. There are some who think his future in the league could be on the offensive side of the ball (and special teams) and that the opportunity to expand on his offensive skills could have drawn him back to USC for his senior year.

Alas, that didn’t happen. There will be no run at the Heisman (something he had long stated as a goal) and no part of a USC team that will enter the 2017 ranked among the top in the nation. Even though he won’t be there, you can’t deny the impact Adoree’ had in building the foundation for where the Clay Helton program is headed. He had star power, and the memories of what he did will be remembered for years to come. For that, Adoree’ “Sweet Pea” Jackson, we say thank you.